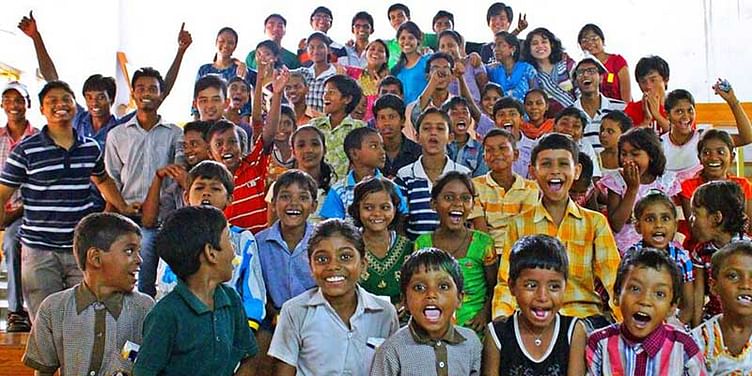 After Harsh Vardhan Singh made a short film (VOICE) with the help of local slum children around his college for Microsoft Imagine cup in Education category, he felt as if he had used the kids for his entry into the competition. The guilt didn’t let him sleep. He had shot a movie which showed the use of VOIP technology to educate underprivileged children, while the ones who acted in the film were themselves uneducated and alienated from the concept of education.

Harsh decided to do something. He started teaching the children around his college (NIT Durgapur). Soon his friends joined him and volunteered to teach the children too after college and on weekends. These children were mainly immigrants from Bihar, and the area was known as ‘Bihari More’ (pronounced as mode in Hindi), close to NIT Durgapur campus. Thus the Bihari More Education Project (BMEP) was born.

Soon looking at their dedication, the management at NIT Durgapur allowed them to use their classrooms to teach the children and the alumni also donated to the cause. They started teaching the kids with standard textbooks, distributed stationeries and uniforms.

In 2012, two years after Harsh had passed out form the college, One of his juniors Jigme Lama along with his friends Aneesha Murty, Eshna Ekka and Nikhil Bara started talking to kids involved in child labor and convinced their owners to allow them to study after working hours. It took over six months of convincing before they were allowed to study under BMEP. “It was a great achievement for us”, Harsh recounts.

During his final year, Harsh made another short film (The Uncaptured Passion) which was selected for the 63rd Cannes Film Festival, France, and had a world premiere on May 21, 2010, at Palaise de festival, Cannes. His talent was noticed by filmmaker R Balki who called him to Mumbai to work with him. Harsh gave up his placements for his passion and went to Mumbai and started working. However, his heart lay with the kids in BMEP. At present, Harsh has his own company Paper Weight Entertainment India, which undertakes independent projects and the money he earns from it is used for BMEP. They had also done a fundraiser in 2012 for the same.

At BMEP, they have expanded to a lot of activities to improve the life of underprivileged kids including Annual Medical Checkups, Basic Awareness about hygiene, Teaching kids to talk and speak in English apart from soft skills, They are taken on trips to science fairs. Everything is volunteer driven at BMEP, who are selflessly working towards giving a better life to these children by educating them.

At present, there are 53 children from the slums and nine child labourers who are being mentored by over 40 volunteers at BMEP. They have admitted four children into regular school at Mother Teresa (English medium) School. Suneeta Kumari, a deaf and mute child, was given a hearing aid and was admitted into a special school called Sahas in Durgapur. “When people ask me about my greatest achievement, they expect me to say Cannes film festival. But looking at the progress of Suneeta gives me a bigger sense of achievement than anything else,” Harsh says candidly.

His biggest aim is to get these children to graduate and make sure they stand on their feet. “Imagine, if everyone does this around their college, a lot of problems will be solved,” Harsh adds.