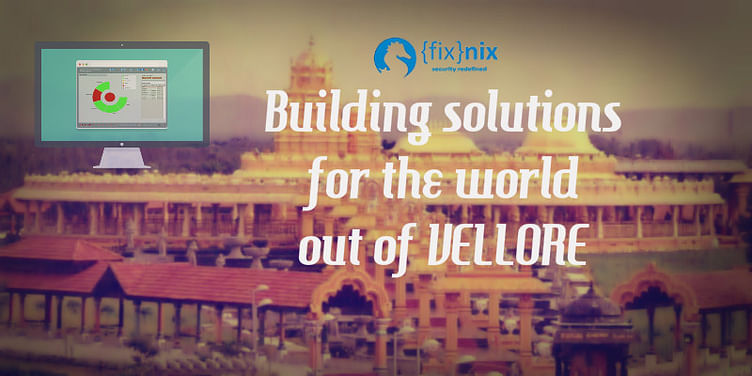 Spending INR 1.2 lacs on an iMac when you are trying to start a company with savings of INR 10 lacs may not be the smartest thing to do. Shanmugavel Sankaran learnt this the hard way. But that learning has held him in good stead for the past one and a half years while he bootstraps his information security product startup.FixNix was born as a solution to the problem that Shanmugavel faced while working with another startup as their Chief Information Security Officer (CISO). He was looking to buy a solution at an affordable budget for this startup. But he was taken aback when he realized that there was nothing available sub-$10,000.

With a vision to democratize Governance, Risk & Compliance (GRC) solutions at affordable rates, he started FixNix. The startup aims to provide GRC solutions to growth markets like India and Africa.

Almost a decade back, Michael Rasmussen, a Forrester analyst who brought different verticals together in the information security and compliance industry, coined the term GRC. He is called the father of GRC. The industry though is reaching its maturity in terms of innovating delivery models, price points, cloudification, etc only recently.

Shanmugavel could foresee that there was going to be an increased need in a high growth, but price sensitive country like India for a solution which takes care of compliance, security, and governance through consolidated CxO dashboards. He spent the next three months in a closed room in his house devouring all information he could on GRC.

Later, when the idea got solidified he wanted to sell before building to make sure that the market actually needed the product. But how do you sell an enterprise security product when you've only INR 8.8 lacs of personal savings left after an expensive iMac purchase and three months of sleepless research? Was it feasible to assemble a team or outsource the development?

“No small product solutions company even wanted to get into a partnership model. Senior talent from the industry didn't want to quit for a startup,” Shanmugavel recalls.

Getting the team in place

A few of his friends from the US were already helping Shanmugavel shape the idea and committed to come on board full-time if the company was willing to move to Chennai. He identified an office space of a friend in Chennai and it was sublet to FixNix.

Then he assembled a strong first batch of 15+ interns who joined the company in the first two months, December 2012 and January 2013. The first hires were made to sit in a relative’s home office as part of the induction.

Meanwhile, the friend who had committed to quit and join FixNix to steer the technology development of the product couldn't join because of family and personal commitments. But this didn't deter Chief Nixer Shanmugavel. He was able to steer the team single handedly.

Shanmugavel’s aspirations took the company many places where there was a serious problem with information security. The company started providing virtual CISO advisory services to continue to bootstrap and build the product. Even as they provided these services, the need for a GRC IT Security product was validated. This was the base that FixNix built to pitch their product pilots.

But the team had committed to running pilots without even the slightest glimmer of a product in sight. Open Source came to the rescue. Shanmugavel and his team could identify few tools which were meeting part of the needs of the clients. They started working with these tools.

By March 2013, many of the interns converted to full-time roles. The company started participating in many conferences and meetups in Chennai, Bengaluru and Hyderabad. “I started selling aggressively even before the full platform was in place. We were confident about solving problems in GRC through Open Source solutions,” says Shanmugavel.

Related read: 26 thumb rules for bootstrapping from a toughened entrepreneur

Winning the Microsoft Bizspark challenge and the IEEE Cloud Conclave

The FixNix GRC product participated in the Microsoft Bizspark Challenge and won the regional finals from Tamil Nadu. The startup was awarded $60,000 worth of Azure cloud credits along with $5,000 cash. They were also adjudged the ‘Best Cloud Security Startup’ at an international IEEE research conclave on cloud. “As a six month baby, we were able to compete with multi-year research-backed big boys who were into analytics. This boosted our confidence.”

The money was draining, but the inflow through services was low. There was a need to raise money. The chief nixer was keen to raise a loan in his personal capacity rather than chase VCs. A Tamil Nadu government New Enterprise cum Entrepreneurship Scheme loan caught his eye. A one crore loan was approved with the TN government backing it up with a 25% subsidy. But this meant that the team had to move to Vellore as part of the terms of the loan. Shanmugavel turned this into an opportunity by utilizing it to tap into the research talent pool at VIT University.

The power of ‘Ask and you shall receive’

During this time, Shanmugavel applied for the NASSCOM membership. The process ran into inordinate delays due to the extensive documentation and lack of follow ups from NASSCOM.

“If an entrepreneur is making a bet on something believing that the expenditure is going to take him to the next level, he should be able to see early results within three months. So a six-month wait without any result, that too for a bootstrapping entrepreneur, was unacceptable,” explains Shanmugavel.

He directly confronted the NASSCOM chairman in the next conference which led to the membership getting approved within 12 hours.

FixNix was able to initiate contact with tons of premier government agencies like STQC, NIC State Data Center, and BHEL etc. They got pilots with many government organizations as many of them were scared after the NSA scandal.

NASSCOM sent Shanmugavel as part of a senior delegation to Africa. The first release of the bank loan happened just a day before the trip which helped the entrepreneur fund the trip. The expensive self-funded African trip was a bet which the chief nixer was ready to take as he saw the potential of Africa with their increasing number of banks, developmental projects and IT infrastructure. Shanmugavel came back to India with loads of contacts and learnings that startups should ‘look beyond’ and explore different markets.

The FixNix Vellore R&D center was officially inaugurated by the collector of the district along with NASSCOM regional head at a function inside VIT University. Before the inauguration of the Vellore facility, FixNix conducted a widely attended campus recruitment in VIT starting their official relationship with VIT. Nine M.Tech & seven MBA students were formally absorbed into the young FixNix family. VIT incubator is still exploring ways to offer FixNix a space in their premises for collaborative research.

An offer for a merger!

On the sidelines of the infrastructure setup and loan tranche releases, there was an irresistible offer for merger by a UK group. “FixNix had received many offers for funding by respected angels, HNIs, and seasoned entrepreneurs of Hyderabad, Bangalore and Chennai prior to this. Few reputed VCs had also shown interest in funding the company. But getting an actual term sheet with formal numbers was awesome,” recalls Shanmugavel.

After a year of starting up, Shanmugavel’s parents believed in his idea for the first time. “Though I was not making as much money after quitting my job, slogging in hot Vellore instead, I was convinced that it is a journey which will have a good end. I stopped worrying about bankruptcy.” After giving the offer a lot of thought, Shanmugavel politely rejected it as he wanted to build more.

The follow-ups from the UK company meant that FixNix was pitching to many more MNCs. This led to several partnerships like Hexaware, Grant Thornton, and Raksha Technologies. The company was now able to reach out to a diverse set of clients across the globe. FixNix signed single solution deals of $30,000 size.

The startup has marquee big-name clients like Dubai Port Authority, BHEL, GMR, Mphasis and others.

To consolidate its development process, the company is seriously considering forging relationship with the likes of Railsfactory which helps product companies.

FixNix is now also actively looking out to hire senior talent from the industry to join them.

“No godfather is behind FixNix. It is a pure first-generation entrepreneur firm which was founded by ex IIIT-H, Microsoft, IBM, Reasoning Global guy with novice entrepreneurship skills. If I can do it, so can anyone,” reasons Shanmugavel.

During its 18 months of existence, Shanmugavel has learnt several key lessons, which he jots down in this extensive A-Z list of thumb rules for bootstrapping entrepreneurs.

This article is part of our series, ‘Bootstrap Heroes’. Here, we feature startups which have consciously taken a decision to go the bootstrap way. If you are one such startup, do write to us at editorial(at)yourstory.com with the subject line: ‘BOOTSRAP HEROES - <startup_name>’