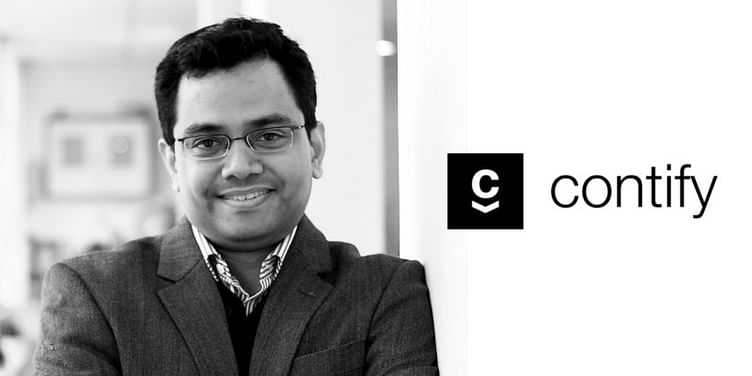 Contify is a New Delhi based product company focused in the areas of machine learning, artificial intelligence, and natural language processing. Their flagship product is an enterprise grade competitive intelligence (CI) platform delivered through a SaaS model. The product has been designed for CI and market insight teams of large organizations that deal with the job of identifying, sourcing, curating, and disseminating critical business information, across several functions, which may impact the medium to long term competitiveness of their organization. The solution aims to enable any division that depends on external information to make business decisions and create value for their shareholders. It simplifies the process of searching for, consolidating and organizing the information required to generate actionable CI for the organization.

At some point in our lives, all of us come to the realization that we need to do something bigger and better; something that is worth the time you spend in doing it. For most people with an entrepreneurial mindset, the triggers are different but the outcome is generally the same – starting up. For Mohit Bhakuni, the trigger was unexpected. After graduating from IIT Delhi, he moved to the US for his first job with Deloitte Consulting in 2000 and in 2001 the World Trade Center collapsed right in front of his eyes. That was the trigger. “Almost all of us are exposed to unsettling events through several mediums but to witness something so devastating in person is a different experience altogether. It exposes you to how fickle life is and to the fact that there’s limited time to do something worthwhile with it,” says Mohit.

He continued with Deloitte Consulting till 2004. He knew he needed to start up but what was still figuring out exactly what he wanted to do. He then used all his savings to enroll for a management degree at INSEAD, France. “I had done my research and concluded that INSEAD’s focus on entrepreneurship would take me in the right direction. I would later go on to realize that entrepreneurship couldn’t be taught inside a classroom but INSEAD’s case study driven teaching methodology laid the foundation for developing well rounded perspectives and critical thinking – capabilities that I still find valuable when looking for answers to the ‘real’ difficult questions,” says Mohit. Armed with an MBA, he came back to India and took up a job, far below his pay grade, running the Internet business of one of India’s leading newspapers. After spending a few years with different media companies, Mohit identified a business opportunity in content distribution, developed a business network, got to know some incredibly smart colleagues and in 2009 we started Contify.

Back then, the Internet as always was fascinating. Web 2.0 consumer platforms (Facebook, Twitter, etc.) were gaining incredible traction alongside rapid development in the enterprise space (Salesforce, SharePoint, Buddy Media et al). "We started exploring product ideas. A common theme that emerged in our discussions was ‘information overload’ and how it was affecting businesses. Organizations were trying different things but there was no dominant scalable solution for this problem. We concluded that building a next generation industry news product would be a good place to start," says Mohit.

The technology backend required to do this could later be easily scaled to add a variety of information types to the mix other than just news. But building the product required money. One approach would have been to build a quick prototype, get a few early anchor clients and approach investors.

We decided against that approach because we wanted to use investor money for scaling a business instead of building a product. That led us to start a content licensing business first. We had the contacts, team, and market insights to get us off the ground. That turned out to be a great decision. Within a year, we had hit half a million dollars in revenue. The content licensing business continued to grow and the revenues were diverted to building the industry news product.

Finally, after a lot of work, the first version of Contify.com made its market debut in 2012. They got a few clients on board but the feedback was not heartening. The customers weren't finding enough value. They had pivot. "Rather than focusing on something general like Industry news, we found that deeper information about only the competitors is more relevant and valuable to the customer. We positioned Contify as ‘Competitive Intelligence’ product with our existing clients and other large organization across industries which formed a part of our broader target market," says Mohit. And The feedback was unanimous. They all agreed that something like this would be valuable for their organizations. Mohit adds that the road from Industry news to Competitive Intelligence was not at all straight. "We dabbled in two new domains: Content Marketing and Media Monitoring. These were more of internal pivots than market facing ones. These services were not marketed and remained in stealth mode. The idea was to build features and capabilities based on actual usage by paying customers instead of on assumption," he says.

Contify has now grown and some marquee clients like PHILIPS and GlaxoSmithKline. Contify has taken the best of technology enabled information harvesting and fused it with a layer of human curation to deliver an experience that is accurate and relevance. "Our primary target market comprises of large enterprises that have multiple product / service lines and business verticals. As a product, we’re industry agnostic. Some of our biggest customers look at Contify as a central access point for all their competitive intelligence needs," says Mohit. Currently, Contify is in the process of establishing strategic and distribution partnerships with market research and intelligence firms who wish to integrate their own project deliverables into the platform and use Contify as a unified interface for delivering 360 degree competitive intelligence to their customers.