When you lose your legs, learn to fly: quadriplegic Navin Gulia’s extraordinary story 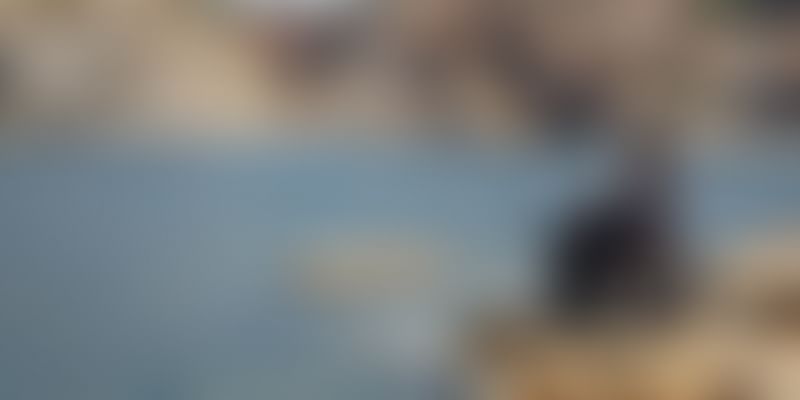 I’m doing a post dinner stroll when the Dev Anand ditty playing on my earphones is interrupted by a ping. A message flashes on my cell screen: “Hi bud dy, can I call?” It’s Navin Gulia. That’s how he has started spelling buddy lately, with a space in between, since both of us have got busy with our lives and don’t have as much time for each other anymore. When I call him he is all enthusiastic about a new mouth organ he has bought. “I’m still getting used to it but I can play you a song,” he offers. And as I walk under the trees in the moonlight, a tune rings out in my ears. It’s a little off key and I worry a bit since I won’t be able to identify it if he asks me to; but luckily he doesn’t. He is planning a picnic to a lake he has recently discovered. “It’s got brilliant blue water like the Pangong Tso. It’s just 40 km from here; but four wheel drive. Your car might not get there but I can take my jeep,” he says.

Well that’s Navin, my bud dy with a space in between, that we’re trying to bridge. What most people notice first about Navin is that he is a quadriplegic. But, frankly speaking, now that I’ve known him for years I don’t even register that he moves around on a wheelchair, except when he knocks down my favourite pot trying to maneuver it inside my narrow sitting room door. Preceded generally by his effervescent wife Khushi and a noisy yelping pug they have recently acquired, Navin is a live wire for a friend -- ready to help, to guide, to crack jokes, to take you for a momo treat or participate in a samosa devouring round.

The first time I saw him at the Queen Mary Technical Institute in Pune, he was trying to get used to the spinal injury that had turned him into bedridden-man from the top of the course cadet that he was. On that rain-soaked Pune afternoon, when I didn’t know what to say to a young man whose career and life had come crashing down because of a freak accident that paralyzed him for life, he made things easy for me. He was cracking a joke with a nurse and laughing loudest when he turned to include me in the warmth of that smile. He was also fighting with the government to grant him officer status and a pension since he had got injured on the last day at the Indian Military Academy, while performing at an infantry obstacle crossing competition. We sifted through his papers and Army rules for a national daily article and to me it looked unlikely that he would get what he wanted but still I pleaded his cause since he was so gung ho about it. Not only did the pension come to him; since then I’ve watched him get almost everything that he has aspired for.

Related read: How long will the authorities remain deaf to the soundless cry of this mute wrestler? The story of 'Goonga Pehelwan'

Calling Navin a role model for the differentially abled would not be enough. He is a role model to all of us, with dreams that we don't always have the courage to pursue; restricted by our own acceptance of our limitations.

He is a living example of his favourite legend: Our ability never restricts us, our thoughts do. If we think we can, we can.

Navin was at the Indian Military Academy when a freak accident doing gymnastics paralysed him neck down. He regrets that the cadet who accidentally pushed him leading to his fall never came to meet him after that. “I would have liked to tell him not to feel any guilt because accidents happen. But probably he could never face me,” he once told me. He said he never thought about who had pushed him but only how would he still get on with all the things he wanted to do. Gentleman Cadet Navin Gulia of the Indian Military Academy spent many months lying on his hospital bed with a traction drilled into his skull to keep his spine straight. He spent that time making a mental list of all the things he would never be able to do. "I would never be an Army officer, I would not be able to write, I would not be able to do anything with my limbs...the list was endless," he says.

You'll like to read this: He was blown apart by a mortar and left for dead on a Kargil battlefield. Now, he’s running marathons

And then he performed a small act of courage. He decided that his self worth did not come from any of those things. “I taught myself to be proud of what I was. And then I started finding ways to make myself worthy of that pride.” It wasn't easy. He hung a book from his hospital bed and started to read, practiced mental chess on an empty chessboard, dictated his answers and passed a computer proficiency course at Aptech with 99 per cent marks; had his friends carry him up the 40 stairs of Symbiosis everyday and completed his Masters Degree in Computer Management with first class.

He started teaching computer science for a living, fought for a driving license and when car manufacturers did not show any interest in his hand control designs, went ahead to design a hand driving kit for the differentially abled that can be attached to any car.

"The best way to empower a person is to take everything away from him. When you have nothing to lose, there are no fears," Navin says with a smile.

Who would know it better than him? When doctors pronounced him 100 per cent disabled, Navin challenged those limitations, and strived relentlessly to achieve whatever targets he set for himself. Though Navin has no sensation below his shoulders, he has taught himself to drive cars and motorised gliders. "With practice you can do anything," he says, "I was never afraid of hard work".

He has designed controls that let him handle an automobile's clutch, brake and accelerator simultaneously and uses them by pushing his arm, by moving his shoulder. "Flying is easier than driving. The controls are so much less complicated. Pull the steering and the plane goes up, push it down and it comes down. Unlike a car, a plane cannot topple. So I found flying even easier than driving," he explains.

His zest for life has worked on the romance front too. He found his dream girl Khushi – a Goan - online and she was so enamoured with him that she dropped everything and came down to Delhi to marry him and be with him and his parents.

Navin has gone on to set a Limca World Record – he has driven a Tata Safari to Marsimik La, the highest mountain pass in the world. At 18632 feet, it is 1232 ft higher than the base camp of Everest. He has modified cars for polio affected people, designed controls for the differentially-abled, given motivational talks to soldiers disabled by war and insurgency, touring hospitals to share his infectious enthusiasm and will to live a happy life with the war wounded and paraplegics.

He has also held the position of Senior Coordinator at the War Wounded Foundation, Delhi, and now runs two NGOs – ADAA and Jan Jagriti -- in Delhi that work with street and rural children. In 2005, he adopted Barhana, a village in Haryana, where the male-female ratio is one of the lowest in the country. “They have 376 girls to 1000 boys. We are trying to support girls and build them into success stories so that they are a motivation to other girls and to their parents,” he explains.

In December, he brings out the second edition of his autobiography – ‘In Quest of the Last Victory’, in both English and Hindi. Sales have touched 1 lakh for the hard and soft copies included and he is looking forward to more.

Navin has received the Chief of Army Staff Commendation for Exemplary Service 2005 and National Role Model Award from former President APJ Abdul Kalam in 2006. He lives in Gurgaon with his wife Khushi and his parents.

Related read: She found the answer to pain, paralysis and pity. Now she shares it with others

About the guest authorRachna Bisht is an Indian writer who has spent more than two decades putting words together for an eclectic mix of eccentric editors. She was a winner in the Commonwealth Short Story Competition (for her first short story 'Munni Mausi'). Penguin has recently published her first book, 'The Brave - Param Vir Chakra Stories', which makes her an author besides being an Army wife and mother to a precocious 13 year old.