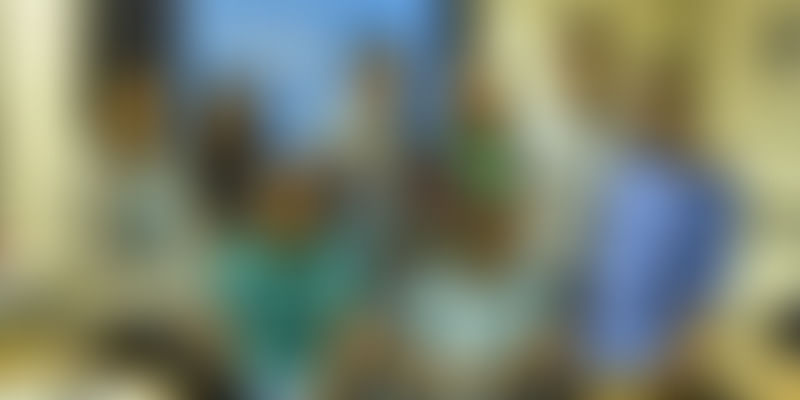 Remember the time when the school diary was the only means of communication between teachers and parent? We had to note down every reminder and complaint and get them signed from our parents as a proof that the information has been communicated to them.

At the time, when digitization is touching all aspects of our lives, four final year students at IIT-Bombay, Jaideep Poonia (Civil), Dhanesh Kumar (CSE), Shital Godara (CSE) and Vikas Chahar (AEROSPACE) have made an app which does all the above and even more. They believe that this will save time for teachers and they can focus on teaching.

Knit App was launched just a couple of months ago but it has already received an overwhelming responses from the clients and have even raised seed round funding recently. The company has already pivoted once and is still evolving but just a few months of its journey encloses a compressed experience of years. YourStory spoke to Jaideep Poonia, a final year student at IIT-Bombay and one of the Co-founders of Trumplab, about the startup journey so far.

From interning at Housing to starting up

When Jaideep Poonia was in his first year at IIT Bombay, Housing was just under development. One of the co-founders contacted him to help them out with operations which he did. After a year when Housing was expanding to Hyderabad, he was called again. But this time, his role was notched up. He handled major challenges and responsibilities first-hand, including hiring, training, sales and operations team. His contribution brought initial traction to the website and he started feeling the urge to start up.

In 2014, Jaideep completed third year at college and while his batchmates were busy preparing for their placements, he was in no mood to go for the same. At the same time, IIT Bombay introduced a course on entrepreneurship under Bharat Desai Center for Entrepreneurship and Jaideep took no time in registering for it. He worked on a project to create an education app. He recollects how the four co-founders came together,

After doing a lot of research I finalized the idea of parent-teacher communication. I found two more people with similar thoughts about my idea. Later, I approached Dhanesh Kumar who ditched his PPO from Amazon to join us as CTO.

Raj Jaswa, Founder of Selectica, who was the course instructor for entrepreneurship course, mentored Trumplab team and continues to do so till date.

Why education & why the pivot, even before starting?

Jaideep mentions that his decision to create an ed-tech company was based on the observation that teachers use very little tech to enable their tasks. The ERPs (or management solutions) being used in schools are quite complex and most of them have it because of the ‘me-too’ attitude, not because it's actually a great product. To address this gap, Trumplab was started.

We started with an idea to make information from school more accessible to the parents but soon we realized that we were heading towards mobile ERP. We decided to change the course of things and pivot to just keep parent-teacher communication.

Almost every school on Bombay has this SMS pack bought for broadcasting emergency SMSs (which are very formal) to all the parents. Unfortunately, teachers are unable to use this tool to send reminders and announcements because SMS is an additional cost to school. We built Knit app considering all these learning.

Some teachers were using Whatsapp to interact with parents of their students but they had to stop it because of a barrage of queries from parents. This left team Trumplab thinking and they made it a point to keep ‘one-way messaging’ at the core of their app.

Education market in India is pegged at almost $110 billion of which online accounts for only $20 billion. Targeting seems to be on slippery grounds for the company as Jaideep mentions, “We are experimenting with what kind of school we should target first.” However, Trumplab has kept 20000 schools and about 20 million parents and teachers in its target group.

They recently finished their pilot with PG Garodia School and opened the Knit App for five schools already. They are sending out more than 10000 messages every day and aim to reach to 50 lakh user base in the next two years. Again, there was no mention of how the company plans to do that.

Trumplab has raised seed round investment from a group of a investors, including Rohit Jain, Co-founder of Mexus Education; Amit Rambia, Founder of Vardhaman Technology, and others. Jaideep speaks about their investors,

The reason we chose this group (as investors) was because we have a vision to become an education company not a one-way messaging company and they respected that. Others were more interested in us just because messaging is hot and we were in that domain too. All our current investors are from the education sector which is very crucial for us in this stage.

Though Jaideep says that their only direct competitor is remind.com, which is a US-based company and that Trumplab has an early mover advantage (in India) over them, a little Google search threw a different perspective.

Ghaziabad-based startup Edunext Technologies seems to have parent-teacher communication as a part of their solutions (myMschool app). Similar to Remind, there’s ClassDojo which has a bulk of parent-student-teacher community on its platform.

In recent times, a good number of startups have sprung up in the education sector from IIT-Bombay. Some of the noticeable names include Toppr, Plancess Edusolutions, InOpen Technologies and LurnQ. According to Jaideep, there are multiple factors which contribute to the positive environment for starting up at IIT-Bombay:

As we write this, team Trumplab is busy acquiring some clients and is in talks to raise their next round of investment. Stay tuned to get further updates on this.