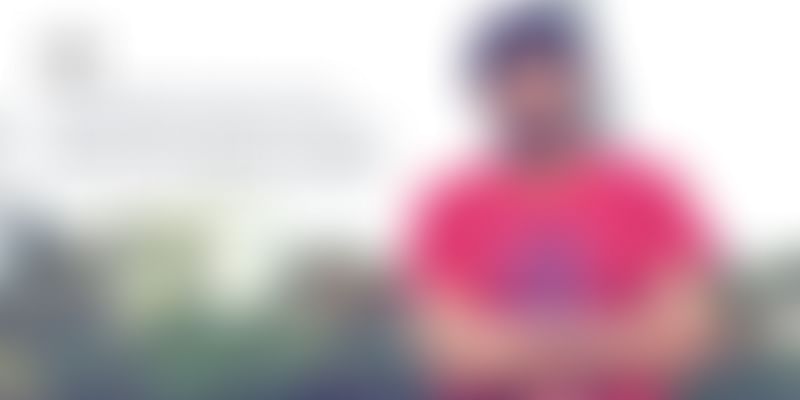 I’m a kid who just got lucky.

Not a very usual introduction, but these were Karthik Balakrishnan’s first words when we started our conversation.

If you are one among the million plus Indians who have sent an email to the Telecom Regulatory Authority of India (TRAI) supporting net neutrality, you might want to thank Karthik. The 22-year-old final year student at Vellore Institute of Technology was one of three techies who coded their way to save the internet.

Wearing a red-colored t-shirt paired with jeans, Karthik looked like an ordinary hacker. But what makes him special is his pivotal role in the entire ‘Save the Internet’ campaign. He calls it his ‘plain dumb luck’ but according to us, it’s more than that. Here’s an open hearted conversation with Karthik Balakrishnan (his first ever interview), the youngest member of the group of people behind the net neutrality campaign.

A student of Frank Anthony Public School in Bengaluru, Karthik was an average student throughout his school days. However, Karthik was a mischief maker in his childhood, which led him into trouble very often. He recalls one such incident when his bed caught fire (because of his experiments), but he walked out of the house pretending nothing had happened.

His father worked at Wipro for almost three decades and retired two years ago. Karthik’s mother runs software and industrial automation company, Axcend Automation and software solutions Private Limited. Born to an engineer father and a manager-turned-entrepreneur mother, he has grown up seeing his parents working hard. This keeps him away from complaining about small issues in life. In the faintest of his memories, Karthik recalls the times when he used to be on the lap of his father while he was playing games on the desktop. Even though he has grown up with computers, the DOS-era early exposure to computers didn’t make Karthik crazy about them. In fact, he had a dilemma between choosing design and computer science engineering after his 12thstandard. He chose computer science because he was not sure how he would make a career out of design.

The difference between the top 1% coders and the remaining 99% is not huge. It’s just a perspective which makes it seem big. The jump from one category to another doesn’t take a genius mind but some determination.

Karthik has been trying to make many young coders make that jump in his college and elsewhere through workshops, sessions and other platforms.

An app to check your attendance!

Karthik finds himself fortunate enough to be among the like-minded group of friends. In his second year of college, he along with his roommate made an app which allows students to look at their attendance on their phones. After a few iterations and a couple of years, now 18000+ students of VIT are using the app, and the college plans to make it official as well. He adds,

It was a genuine problem as the website interface was horrendous on phone and to keep a track of 75% attendance in all subjects, one needed regular updates and instant access to the existing data.

Failing to get permission from the college for this, we spoke to an incubatee startup on campus and started working from their office two days a week.

Karthik was working on the Android app and it was his first exposure to Android app development. The entire process not only gave him some technical expertise but provided the much needed confidence as well. The project eventually found a place in the top three in the Google Cloud developer challenge 2013 for the innovative use case of Google Cloud.

On Dec 2014, Karthik joined Hasgeek as an Android intern. It was all a regular Android development and backend work for him till his boss Kiran Jonalagadda received a call from Nikhil Pahwa, the torch bearer for the net neutrality campaign in India. Karthik recalls,

The only person I know in the entire scheme of things (Save the Internet campaign) is Kiran. When TRAI put up the consultation paper on OTT(Over the top) services out on 27th March, Nikhil spoke to Kiran about working on a process to make people send emails from their individual IDs in response to the paper. We wanted people to use their own email client on phone and desktop.

Karthik said yes when Kiran asked him if he would do the job. The only issue being that he (and others) anticipated 10,000 emails to be sent over the next 14 days. Karthik worked on the website and tested in as many devices, OS and browsers as possible to avoid any technical glitches. In a couple of days, the website was ready but it was launched only on 11th April. Karthik explains,

For almost a week, we were working on the answers (to the consultation paper) with lawyers and refining them to make sure that the best arguments and logic are presented with enough evidence. Nikhil had spoken to Tanmay Bhat and AIB team for the initial push to the campaign. It was not a delay but a well planned effort.”

Apart from AIB, Reddit India and Mozilla India has also supported the campaign.

The frenzied uniqueness of the campaign

According to Karthik, nobody in the world before had taken the approach that ‘Save the Internet’ campaign took. It was common to send responses to a body/individual on behalf of people which served as their proxy. They were keen on making the authorities know that the participants (people sending emails) are actually putting the effort. There were some very interesting (and startling) facts about the campaign which he shared in the conversation:

Karthik believes that simple solutions often pave way to the most complicated of problems. He says,

We didn’t want TRAI to misquote the number of emails and hence needed those email IDs. Initially, only one email ID was created but when tens of thousands emails poured in, Google considered it as spam and hence we had to make numerous email IDs.

Whenever a technical problem was reported, Karthik made sure that it was sorted immediately. To keep an eye on the initial glitches, he was awake for almost the first three nights. Testing times for Karthik came in when he had to fix bugs while 3000 people were on the website.

Before we give the entire credit of handling the technology part of Save the Internet campaign to Karthik, he reminded us that Aravind Ravi from Scrollback & Mitesh Ashar also contributed massively to the campaign. All three were working remotely.

And in the end

At the end of 14 days, more than 105 times of the initial goal was completed. Karthik says,

We didn’t realize the impact it’ll have. On social media, people were trying to put pressure on Flipkart, Cleartrip and others to withdraw from Airtel Zero (which eventually they did). We launched on Saturday and on Monday, we were on all TV channels at prime time debating on net neutrality. Within 60 hours, we got a response from Mark Zuckerberg on this issue.

If nothing, my faith in humanity is restored.

Karthik also participated in the discussion held at the Centre for Internet and Society, Bengaluru, along with Pranesh Prakash, Rohin Dharmakumar and Kiran Jonnalagadda.

Related Read: The Net was born free, but telcos TRAIng hard to put it in chains

What saving the internet taught?

After working on the technical side of such a large scale campaign, Karthik learnt that sometimes the most technical solution might not be the best solution. He says,

In such cases, you don’t have the time to build the infrastructure. But improvise on the existing ones. Using Google docs, Slack, Github and many other basic tools was a smart decision rather than building a new system.

Karthik also thinks that it was good that they didn’t over think a lot of things. It wouldn’t have been possible to run the campaign free of cost then and it would have taken a lot of time to build. He was blown with the power of the internet and social media in collaborating. He had received a lot of emails from everyone right from kids to professors offering him their resources and time to support the campaign. Recalling one of the interesting incidents which took place during the campaign, Karthik says,

I won a bet with Tanmay Bhat. We were having the countdown of emails where we have to pick a time when the number of emails sent to TRAI (through their website) reaches the 100000 mark. The one with the closest timings wins the bet and as per the condition, Tanmay couldn’t tweet the 100K feat and instead had to RT me.

We’ve sent 100k responses to TRAI! Give yourself a pat on the back, Internet. You deserve it. #SaveTheInternet #NetNeutralityIndia— Karthik Balakrishnan (@karthikb351) April 12, 2015

Take the jump, not the leap

Karthik believes that the notion of programming being complicated among the engineering students has to change. He emphasized that the jump to the top one percent from the remaining 99% is not difficult.

The only thing which made a difference was that I found a like-minded geeky group. They not only facilitated discussions but also helped in keeping me on track with many other things as well.

Karthik has learnt the importance of sincerity from his father. He tries to emulate it to a large extent in his life. If he commits to something, he’ll make sure to see it through.

Karthik is only 22 years old and like any other boy of his age he doesn’t have answers to many things in life. He’s not sure about his future after his current internship at Hasgeek. After an year or so, he wants to go for masters only to get back to the free environment which will motivate him to experiment. He’s not sure if it’s the academic environment or the college environment, but he wants to take his chances. He’s not sure if his poor grades will help him much in the future. Even after our three hours of conversation, he had this doubt,

I’m not yet entirely sure why I’m being interviewed.

Aaron Swartz – The Eklavya of our times

Watch this video to understand Net Neutrality in a simplified manner.