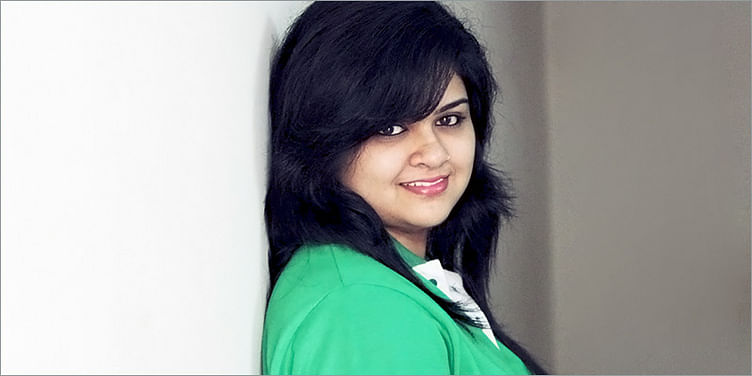 When someone says you won’t do this because you are a girl, I can’t rest until I do that,

says Aditi Chaurasia, Co-founder of EngineerBabu, a company that provides end-to-end IT services, from designing to maintenance. They are into Android and iOS app development, web design and development.

Born in a small town called Garhi Malehara near Khajuraho and in a locality where women don’t have an identity and have suffered for years, Aditi’s dreams took wings. It was her grandmother who encouraged her. At the age of three she was the first girl in her town to study in an English medium school some 18 kms away from her hometown. She travelled daily by the local bus and was often looked down upon as ‘characterless’ for studying in an English medium school with boys.

Her early years in school changed her life. It was her class fifth results that were to define her ambition in life. Aditi shares,

From there on it was a different story. Aditi was powered by the belief that “Anybody can do anything if his or her passion is true. Every brain has the same potential but you just need to discover and follow your passion”.

She started working hard on her overall development, including both academics and extracurriculars. “I carved myself according to what I wanted from myself, I wanted to do something different that nobody was doing then, so I started writing poetry. When people told me that I won’t crack PMT because I am weak in Maths and Physics, I started to love Physics and became the highest scorer there.”

Reaching for the skies

Always wanting to reach the skies, Aditi’s dream of becoming a pilot could not be financially supported by her parents. However, her dreams were to take a new shape. When she was in class six her younger brother was born. He was mentally challenged and the doctors could not find a cure for him or alleviate his suffering. He passed away when she was in class ten.

Deeply impacted by his suffering Aditi could think of only one thing- to save other children from this fate by becoming a neuro-surgeon. After finishing school she tried hard for three years to get into medicine but each time missed the bus due to small margins. The experience left her drained and sad. At this time she sought respite in poetry.

In 2009, in Indore for her CAT preparation, she found a great friend in Mayank who realised the burden of grief she was carrying and inspired her to follow her heart and move on. Aditi realised she could have new dreams and work toward them. Things began to change from then on.

In 2010 Aditi started up with Vendas Services and in 2013 with Titliyan Creation while pursuing her MBA. The latter was a venture specialising in handmade cards that started making profit from early days. She had plans to expand it after her MBA but had to give up on it. “I encountered the typical Indian mentality of our society. If I was not doing a job or getting married then my life was not on the right path. My parents started forcing me to get a job or come back home to stay with them.”

EngineerBabu started early last year with just two people. At the time Aditi held a teaching position in a Management Institute in Indore. To avoid being stonewalled by the pressure of a marriage and a job, Aditi decided to keep this under wraps.

I was working silently as I was on a mission to make it big and a hit for everyone to see that – yes! a woman can startup and scale up her venture in just a year from a two member company to a team of 50.

Initially Aditi continued to teach but one fine day she just quit. “We have worked with more than 500 clients globally and we are also helping in canvassing the dreams of budding entrepreneurs. Both Mayank, my co-founder, and I believe in happy employees and happy clients and worked hard towards this goal.”

From a biology graduate to a medical dropout, Aditi is happy to be doing something that is helping her

provide job opportunities to others. Aditi’s parents are not aware that she is the co-founder of EngineerBabu but today through this story they will know about their daughter’s achievements.Aditi says, “In the beginning most nights were full of tears but slowly hope took over, Aditi discovered herself, implemented what she had learnt so far. I do face financial and resource problems, inexperience in various domains. But all these are like just milestones to achieve.”

Other than her grandmother who has been a constant source of inspiration for her, she has always been inspired by the story of Christopher Columbus and Abdul Kalam’s Book, Wings of Fire.

Both of them have helped me to battle challenges and helped me stand up every time I fell.

Being a woman in India

Aditi echoes a sentiment that many women in India feel. “If, a female decides to do something different then it is like this girl has gone mad or this field is not for girls, this is the time to get married or then have babies and above all learn to cook food, then what will you do in your in-laws home and how you will serve your family. Her wings are cut at every stage. She has to prove herself at every point of time that she is doing something good. These days women are following their heart and standing up for themselves and succeeding in all aspects of life. But still our society needs to get mature enough to consider that a woman’s job is not simply to get married and work. She can succeed in everything she decides to do. For me when the world changes towards women, will be the best day of my life.”

Aditi likes to dance, especially western and hip-hop and meet new people and forge bonds. As an entrepreneur she enjoys building innovative solutions for clients. For her it is the experience that counts-

Whether a person is going to be your client or not I leave a permanent impression with a smile.

This firm believer in positivity ensures that people around her are always smiling. Dreaming with her eyes open she is yet to put down anchor. Her future plans include heading out on a world tour, becoming an investor and start a society back at her hometown, named after her grandmother, to help all women there live a better life with access to better education and work opportunities.