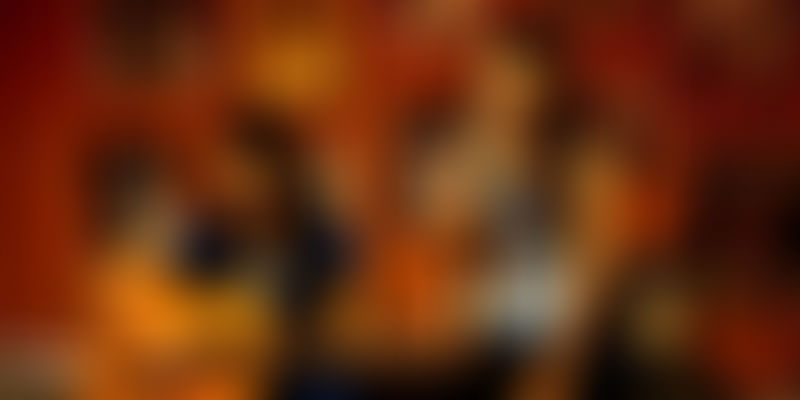 Thank God for the internet! Everything is just a click away, from friends to food and if you click right, even successful partnerships! The Acoustic Girls, Amanda Sodhi and Malvika Sirur Hemmady are testimony to just that! A casual friend request on a popular social networking site led to the musical union of two girls who now call each other soul sisters, but what makes them interesting is the unmistakable camaraderie and the refreshing zeal! This talented duo is all set to record their first album in association with the best in the Indie music scene and we caught up with them to know more.

Born and brought up in Washington DC, vocalist Amanda was never exposed to Hindi music as a child. Amanda discovered old Hindi Classics and artists like Mohammed Rafi and Nusrat Fateh Ali Khan during her growing up years and knew she wanted to delve deeper into Hindi music. With a background in film-making and social media she moved to Mumbai in 2012 hoping to juggle both work and music. Despite dabbling with different bands and performing in popular venues in Bombay and Goa, things were just not working out for Amanda.

An internet marketing professional, Malvika, is a self taught guitarist and was born and brought up in Mumbai. She grew up listening to Hindi music and learning to strum her own tunes. Before meeting Amanda, Malvika taught music at an institute for 3 years. Like Amanda, Malvika also had her fair share of troubles trying to gel with various bands, despite taking a break to concentrate only on music.

An impromptu jam for a close friend and a couple of donut-coffee dates later, both Amanda and Malvika knew that their quest to form the band they always wanted to had ended.

The journey of discovery

Having found each other, Amanda and Malvika went about performing gigs in different venues in Mumbai. Surviving in a city with so much competition was tough, but “We kept working hard and learning on the go and took every opportunity that came our way,” they say. Amanda being a filmmaker herself spoke to artists and bands like Raghu Dixit and Indian Ocean who advised young artists to play as many gigs as possible initially and not obsess over paid gigs. Talking about what their experience taught them Amanda says, “We volunteered with different NGOs and also performed a lot of voluntary gigs.” Malvika thinks “Performing before an audience and jamming in a closed room are two extremely different things, you need to understand what people like.”

While Malvika was a Mumbai girl, getting to the city was a dream for Amanda. “Contrary to popular belief, the Hindi music scene is not really buzzing back in the states,” says Amanda citing examples of popular NRI artistes like Jonita Gandhi and Ash King who tasted more success on moving to India.

“Mumbai is the city to be in for upcoming artistes like us, the energy here is amazing and inspires us to do bigger and better things,” the girls say.

Amidst giggles and a lot of excitement they cheekily say how being girls has always worked for them. Apart from a few stray instances where people have misbehaved with them the girls say, “We are treated with a lot of care and respect. Also, being an all girl band has been our biggest USP.” The name of the game being fame, it is the all women aspect that makes their act even more interesting and different. The duo is also in talks with a percussionist who they plan to get on-board, full time.

The Mozart of Madras influence

A chance to meet A.R Rahman is every musician’s dream and The Acoustic Girls have been lucky enough to have had the chance. Amanda first spoke to Rahman as a part of an interview for Gibson India when she was in the states. Influenced and inspired by A.R Rahman’s style of music, they posted a video of them performing a medley of his most popular songs as a tribute on his birthday. This video was extremely well received and also covered by the media. During a visit to Chennai, Amanda had the chance to meet Rahman who she says,” Was extremely humble and kind to hear me sing and know more about our style of music.” This, the girls say, is their most cherished memory.

The debut album and future plans

Having performed at venues like The Hive, Blue Frog, 3 Wise Monkeys, Bandra Base and Prithvi Cafe among others, the duo is all set to record their debut album at The CottonPress Studios, Mumbai, with noted Indie producer, Sid Coutto. “Working with Sid is like a dream come true and we are fortunate to have had the opportunity to have met and worked with greats like him so early in our careers” they say.

The bond they share is a refreshing change in today’s world which is so full of competition.

As women we need to empower each other and become each other’s strength,

they conclude. We cannot agree more.