These Chartered Accountants aim to reduce your commuting woes in Bengaluru 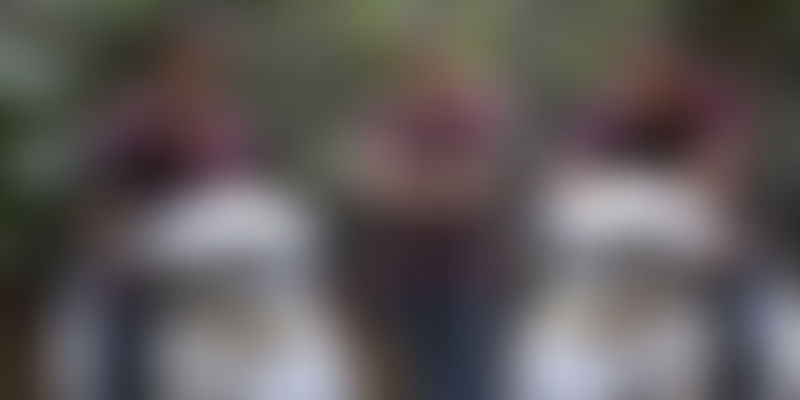 The World Bank predicts urban migration will speed up over the next five years globally. According to the Tata Institute of Social Sciences, Bengaluru gets a million migrants coming in every two years, with 47 percent of the educated (graduates) ones liking working in the city. Three young chartered accountants zeroed in on this number and decided to start iRyd. Founders Rohan Arinaya, Yashvant Nijagal and Shashank Danthi figured that migrants would require connectivity from Point A to Point B. What better way than to get them to use a motor bike to get around the city? “It’s a lovely way to discover the city,” says Yashvant, adding that today a migrant has to use bus services, an autorickshaw and metro rail which is still incomplete.

Also, there are several young people who would like to bike it across the city, for an errand or a party, and not worry about the ownership of the asset. Through iRyd's app, users can click on the Honda Activa bike located near their vicinity, scoot away to a location and drop it off at iRyd’s site close to the destination of the commuter. IRyd will use the GPS tracker installed on each bike to track its location too.

Currently, iRyd is running a pilot with 20 bikes in Kormanagala, Majestic, Basavanagudi and Banashankari. The ride is only Rs 60 per hour, for 10 km, and after that the pricing is Rs 4 for every km. It is cheaper than using an autorickshaw or a cab, which charge Rs 13.5 per km to an hour.

“Our service is convenience. The user can get the bike delivered to their house too,” says Shashank. The bikes can be booked for the whole day for Rs 360.

Six months ago, when Rohan, Shashank and Yashvant were paying Rs 300 per cab ride they thought up this idea of renting out bikes. The trio figured that people would rather use bikes than travel by a car. So, they immediately outsourced the development of an app and wrote the processes that would run the company. This was in August 2015, when they also got a primary survey done from an independent agency.

More than two-thirds of the respondents said that they would use the service. Being chartered accountants they knew the regulatory aspects around incorporating a company and also operating a business. It took them approximately 30 days to get the company live, which is faster than most startups. “It is important to find the right chartered accountant for an entrepreneur,” says Rohan of iRyd. Rohan runs a firm called Merican Consultants, which assists startups through their journey. “I bet we got lucky because entrepreneurs take 60 to 90 days to incorporate a company,” says Rohan.

The company procured 20 bikes and went to market on January 21. In 10 days, it garnered 500 trips. The trio invested close to Rs 40 lakh in the business, and are talking to several venture capital companies for funding.

“Price discovery is a great business. But startups will continue to burn cash if they do not have a 90 percent utilisation of their assets,” says V Balakrishnan of Exfinity Ventures.

As far as competition for iRyd goes, there are some, but with their own unique flavours. Bengaluru's WickedRide began with a luxury bike model and has started mass bike rentals under the title 'ApnaRide'. Car rental company ZoomCar is yet to begin operations, although sources say it has the licence to operate bikes. Then there is Royal Brothers, with primarily Enfield bikes, which has scaled up to four cities in Karnataka. IRyd is the only service that offers an app-based cashless experience and does not take security deposits. The company does not charge the user separately for fuel. There is also RentNZip, which is operating for two years. However, these companies are yet to go pan-India. Only Wicked Ride has scaled up its luxury bike experience in six cities, which include Jaipur and Udaipur.

“These businesses need to raise enormous amount of money because they are in the end-consumer business. But the opportunity exists to scale up these businesses,” says R Natarajan, CFO of Helion Ventures.

The founding team needs to build a strong technology platform since their experience is in the finance industry. They are in the process of on-boarding a technology officer. But that talent is hard to come by and is expensive. Clearly the challenge for them is to scale up fast and raise money at the same time. But the good news is that urban migration will continue to be big and consumers will need such services. These companies are actually solving the last-mile connectivity for the consumer and can be a winner if they control their costs. The biggest costs for this industry will be site rentals, maintenance, theft and salaries. The Society for India Manufacturers (SIAM) says that there will be 32 million bikes sold in this country by 2022. But startups like iRyd can help auto manufacturers increase their branding and solve connectivity problems for commuters.