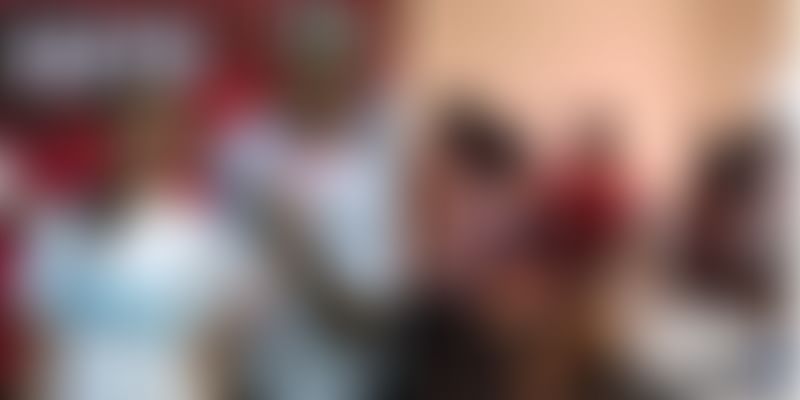 Santosh More is a staunch believer that education is the answer to problems not just in India but across the world, and he wondered how he could do his bit. In 2009, the opportunity presented itself when Santosh saw Teach For India’s advertisement calling for the first cohort of change-makers.

Convincing his father that he wanted to leave a stable job at Infosys was not an easy task. Santosh’s managers also tried to pursue him to stay with the firm, but Santosh had made the decision. He reminisces, “It was an opportunity to come out of my comfort zone and finally do what I dreamt of.”

Santosh assumed that the two years of fellowship would just be about teaching but it was a transformative journey, to say the least. “My approach and perspective on various issues changed. In these two years, I saw an India that the urban Indian is unaware of. My biggest takeaway from the fellowship was the value system that helps create an organisation,” he explains.

In 2012-2013, Santosh and Khushboo (then friend, now wife) would spend a couple of hours every day in a slum near Banashankari (in Bengaluru) where they would teach English to children from low-income group communities late in the evening.

On one such evening, the duo began pondering over what more they could do. They got an exciting opportunity from a low-fee private school to work as academic coordinators.

Santosh and Khushboo were clear that they wanted to start something of their own but had to pick between building new schools or working with existing schools. “We would be able to impact 10,000 students in 10 years if we started a school or create an ecosystem to affect millions of students if we worked with the existing schools,” Santosh says.

With the latter being a clear winner, the duo founded Mantra4Change in March 2013 with the aim to work with existing schools to create a blue print and ultimately act as guiding principles for model schools.

“Most of the low-fee schools, including the government-run schools, struggle to provide quality education to students because of lack of resources and inadequate support. This is what we are trying to address and achieve at Mantra4Change,” Khushboo explains.

Friends and acquaintances offered monetary help through various crowd-funding campaigns. The first major donation was made by Sanjay Purohit, Executive Vice President at Infosys. Funds have also poured in from the Infosys Foundation and several HNIs. Recently, Sowparnika Foundation headed by SD Shibulal, ex-CEO and co-founder of Infosys, funded implementation of STEP (an intervention programme by M4C) at ten schools in Bengaluru.

STEP – the School Transformation and Empowerment Project is the key initiative at M4C. It involves all the key stakeholders in a school system – school administrator, teachers, students, parents and the community – and is a two-year complete school immersion project. It becomes a part of the school system and drives the implementation of the programme. It is a two-stage process – first being the ‘need assessment’ phase and second being the ‘implementation’ phase.

Target (Talent Recognition, Engagement and Training Programme) is a community-based, teacher training programme. Educated youth from the community are trained over a period of three months and are then placed in partner schools as teachers in lower primary section. Post-placement, these teachers are continuously given on-job training for a period of one year. This programme aims at identifying bright and talented youth from within the community and help them become fine teachers.

PreCIOUS (Preventive Care for Inhabitants of Urban Slums) is a programme aimed at promoting healthcare awareness among people in the community. Topics like hygiene and sanitation, nutrition, menstrual and reproductive health, eye-sight etc., are discussed through various sessions and community-engagement activities. Screening camps are organised in association with hospitals.

MANTRA stands for Maverick Association for Novelty, Transformation & Radical Augmentation. For this, M4C works very closely with the students and faculty members of the Azim Premji University (APU). The students from APU seek internships and various field practicums with M4C. M4C is a partner organisation of the BEETF (Bangalore Effective Education Task Force) and LDSG Foundation. It also collaborates with other like-minded NGOs, like the Swabhimaan Trust, Svantantra Trust etc.

Santosh says that they have seen an average 20-percent increase in the learning outcomes of students in mathematics and English across all their partner schools. He adds, “Qualitatively, the classrooms have become more interactive and student participation has greatly increased.”

Every teacher’s progress is meticulously tracked on M4C’s internally developed rubrics based on the data from classroom observations.

There are many anecdotal evidences of changes in the mindset and readiness level of teachers to try innovative pedagogical techniques in the classroom. There are clear data-points to support the improvement in the knowledge and skill level of a minimum of 70 percent of teachers in our schools

A key aspect of M4C’s belief system is building a positive and safe school culture that promotes continuous learning among teachers, students and every stakeholder alike. “Today, we can proudly say that 100 percent of the principals of our partner schools demonstrate a belief in our approach to achieving transformation.”

Santosh says that the most pressing challenge at M4C is to build a team not only passionate about the cause of education but which is ready to take the deep dive and drive change. Khushboo points out that another challenge is to ensure that STEP evolves into a replicable project that can be implemented in any school that aspires to achieve transformation. The duo say that funds is a challenge in the long term considering the scale they’re eyeing.

The five-year plan for Mantra4Change is two-fold: to reach a minimum of 100 schools and 50,000 children through STEP; and implement STEP successfully in schools with different societal contexts.

The duo say they share the dream of every child from every strata of the society getting access to quality education.