Hrithik and Anushka’s go-to yoga expert, Eefa Shrof fought a near-fatal accident and racism in her own country to reach her Zen 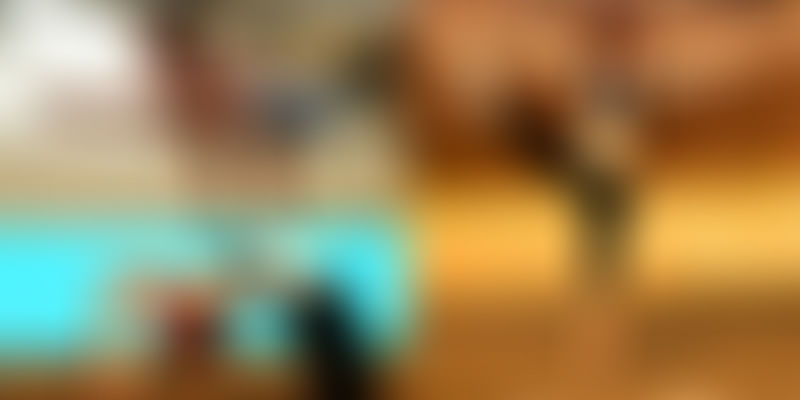 When the universe hurled adversity after adversity at Eefa Shrof, little did it know that she was going to be no shooting star; she was destined to become a supernova. The only thing she allows herself to be consumed by is her eternal pursuit of happiness. After all, when she quit the half-baked Indian academic system at 16 to learn from the school of life instead, she was in search of a better brand of knowledge. When she refused surgery after a near-fatal accident that threatened to render her immobile, and by extension, pilfer away her bread and butter, she was seeking a greater form of emancipation from suffering. When she attained 14 certifications spanning across yoga, fitness, and psychology, she was striving for a superior class of wellness to provide her coveted clientele with. Seldom will you meet such a liberated soul who manages to let her pulsating red so neatly govern her intuitive grey.

The formation of the star

Born in Mumbai, Eefa went to Pune for college at 16, but was so disillusioned with our education system that she dropped out after the 12th grade and decided to jump right into the role she had been laced up for her entire life.

In her own words, she was “raised in the gym,” so when the time came to find an unsullied starting point, she simply traced her way back to her roots and got herself a gig as the instructor for a morning eerobics class. “My first salary was Rs 150… per month! People told me I was getting jibbed, but I didn’t care. I had an entire health club at my disposal and a profitable business model to learn from. It was the best education I could get, and I was mighty grateful.”

By the end of that year, she was running the show for all their morning classes. Safe to say, she had found her calling, and better yet, things kept falling into place. Soon, she quit to become the health club manager at the Residency Club in Pune.

However, in 1996, when she was 23 and had started treading upon the upward peak in her career, something threatened to jeopardise her climb the way throat cancer would a singer. Someone who was surviving because of the mind-boggling chronicles of her limbs had career suicide staring her in the eye when a road accident left her with severe facial and leg injuries. After undergoing painful surgery after surgery on her head and face over a span of several months, there came a point when her 23-year-old brain couldn’t fathom the prospect of yet another one.

“I needed surgery for my leg and I refused it. The doctors told my parents and me that I would be in a wheelchair by the age of 30 for making such a foolish decision. Today I’m 41 and doing more with my legs than most people even half my age,” she says, cryptically.

‘What did I miss?’ you might be thinking. “I was introduced to the idea and practice of yoga through a friend. I picked it up because I had nothing better to do while in bed for a year. At the end of a few months of practice I was walking without support and in another few months… running. I’ve dived deep into its learnings since, and never looked back.”

Stumbling upon this treasure, she made up her mind that she’d bring yoga back to Indians, for we deserve to know the beauty of our culture. However, this resolve was put to several tests. For starters, even this newfound stability and clarity didn’t make the plunge into full-time yoga less treacherous. “I remember being at a party when someone asked me what I did and I said I taught yoga. With a drunken smirk, he said, ‘You are a yoga teacher? You make, what, 300 bucks a month?’ before he walked off, laughing.”

There were few things, though, that left as bitter a taste as the above mentioned incident. Being a novice yoga teacher, she was a constant seeker. “I was a very passionate student but I had no real teacher that I could count on as my guru, and I had been searching for one since I first started yoga.”

A curious medley of enligghtment and tolerance

Her quest took her to Mysore. “When I found Guruji and joined his practice, I quickly became his pet. Guruji opened a new registration book for me, titled ‘National’. I was so proud of it, and I could tell so was he. Upto that point, he had only had two registers, ‘International’ and ‘Local’. Studying under his guidance made me a solid, rooted student. But my classmates just didn’t know what to do with me, as I was the only Indian in a sea of westerners.”

These odd circumstances led her to experience racism in her own motherland, and she was subjected to a range of mental abuse. “I used to cry myself to sleep every night. They nicknamed me ‘Jamjar’ and ‘BMW’. What hurts more, however, is how our own people treat us back home. The Indian obsession with white skin is going to be a hard game to win.”

Thereafter, she gave her exams in philosophy and psychology of yoga, and also studied Sanskrit. “Getting my education with the ISSA in the US gave me a reality check. I started working out a business model because fitness lifestyle coaching had never really been done before…at least formally.”

Her life thereafter was a beautifully synchronised medley of teaching and learning. She procured 13 certifications, including exercise therapy, yoga, corporate training and philosophy — the highlight being topping the US, at age 40, in Sports Nutrition with a 97.7 percent while studying with the International Sports Sciences Association. She has imparted the learnings to her clientele in the form of a delightfully diverse fitness palette.

The business of yoga

“I once read a quote by Anthony Robbins that completely changed the way I looked at work — ‘The amount of money you make is in direct proportion to the amount of value you add to your client’s life.’”

Word got out, and before she knew it, she became the support system for a star-studded client list, including movers and shakers like Hrithik Roshan, Ami Modi, Anupama and Vidhu Vinod Chopra, Abhay Deol, Anushka Sharma, Gayatri and Vikas Oberoi and Dipali Goenka.

Her brainchild, ‘The21’ — A 21-day fitness challenge — took Bombay by storm. ‘The21’ ends with a firewalk, where the challengers walk across a bed of hot burning coals to understand the power of their minds and bodies. Currently, she is working at scaling it up.

Coming up is a video blog with recipes, an interactive website, and a memoir, Dust to Gold, releasing later this year – something she is most kicked about. “It’s the one place I have bared my soul in the hope of encouraging others to drop their destructive addictions and turn to fitness instead. It saved my life,” says Eefa.

She has been the winner of a national award, been voted ‘The Most Promising Yoga and Nutrition Expert of 2016’ by the India Leadership Conclave.

Is it still a boys’ club?

Eefa feels that being a woman in the field of fitness and nutrition has both its trials and triumphs. “On the one hand, people feel safe with you. The only problem arises while training men for weight training. Their idea is ‘how can a chick train me?’ It’s going take a little more nudging for the Indian male to realise that your coach needs technique and knowledge to train you, not strength.”