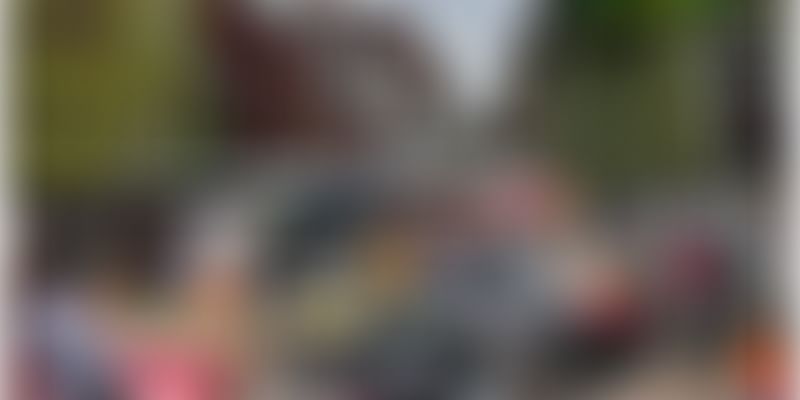 YourStory had already met Velmenni in Delhi a year ago, but chatting with one of the Co-founders in Vienna has a completely different effect. The European side of the company’s story (Velmenni is registered in Estonia) reveals the difficulties and opportunities of moving a business to another continent, from freezing temperatures to working with AirBus.

To a certain extent, Deepak Solanki’s background is similar to many other Indian techies. He has been interested in science since he was a kid and used to carry out many little experiments on his own. His passion was given wings when he started studying engineering and found out research was what he loved. This is how he came up with many interesting applications of Li-Fi, a technology able to send signals from one device to another through light.

After a while of being in the field, Deepak realised there was great scope for light technology. He and his Co-founder Saurabh Garg decided it was a good idea to explore it further. In hindsight, it was a very good call, but initially, it was hard to focus exclusively on Li-Fi, especially because it was research-based work. “We worked in India for almost one and a half years, doing side projects to sustain ourselves,” recalls Deepak. This is how, for example, they ended up solving the traffic light issues in Delhi and Srinagar.

“During that year, we were pitching investors, because research needs investment, otherwise you don’t grow. We tried to talk to different potential investors in India, but we didn’t get a good response. They all said it was crazy to transfer data through light, they thought it was too much of a hypothetical situation, even though we had done good experiments,” continues Deepak.

The recipe for growth found in a little arctic town

So, Velmenni expanded their field of interaction and approached investors in other parts of the world. “We applied to several accelerators in the US and Europe and got a response from BuildIt in Estonia. They offered us seed funding and asked us to set up a company there. We got excited and went to Estonia!” smiles Deepak.

It sounds easy and, to some extent, it was. Estonia is the first European country to introduce e-Residency, a digital identity document for anyone willing to set up a business that can be run remotely. “It’s quite interesting. Anybody can get e-Residency, you get an ID card and you can sign papers digitally. Then, you can open a company and a bank account in Estonia. It is just about 50 euros and you get it in two to three weeks’ time. A small country, but look at what they do!” says Deepak.

This is how two guys from Delhi, a city of about 11 million people, ended up in Tartu, a town in another continent, with a population of 104,000 and surrounded by endless fields that freeze in the winter months.

The first impact was definitely strong. Deepak says, “It was cold. For an Indian, it was very cold.” In July, the warmest month in Estonia, temperatures reach 18°. His Co-founder Saurabh was excited about their opportunity in Europe, but, Deepak recounts, “He had a culture shock. I had been in Europe before, but for him, that was the first time outside India. For him, it was very different..and it happens! The country was cold and good vegetarian food was impossible to find, so it took him some time to adjust to the whole condition and understand the culture.”

…But awesome for business

Now, Saurabh is back in India, managing the team in Delhi, while Deepak keeps travelling between the two continents. He shares, “For me, adapting to Europe was easier. I made several friends in Estonia and whenever I go there, I don’t stay in hotels, but at their places. Adaptation depends on individuals, I guess.”

Overall, moving to Estonia was definitely fruitful. The team met one of their Co-founders there and, Deepak adds, “Technological adaptation in Europe is quicker than in India. In our experience, in India, a company will adopt a technology only if a US or European company has adopted it before.”

He argues that in Europe, “It’s easier to find people open to exploring new technology.” After the three-month programme at BuildIt, Velmenni started working with a potential client.

We set up the Li-Fi in an industrial environment and stayed there for six months, which were fundamental to improving our technology. We created a product out of that, then figured out other applications and moved on to other things again.

The touch of class was the AirBus accelerator programme, “It’s like five companies from all across the globe and they invited us to Germany,” says a humble but visibly satisfied Deepak. The programme lasted six months and it went so well that Velmenni now has a base in Berlin to develop their main project for the aviation industry. It is a light wireless entertainment system that allows passengers to access the internet and to stream videos and movies wirelessly through Li-Fi.

However, if on the one hand, Europe has opened a lot of doors for Velmenni, on the other, it has revealed its challenges. For example, investments are not yet as flexible as they could be. “It is not easy to get investment, neither in hardware nor in research, so it took us time. The first seed investment was a small one, and then we got another one but it took time. It’s there everywhere in the world I guess. Only in the US is it a bit better.”

The main obstacle for aspiring entrepreneurs from outside the EU, however, is still the old problem of getting a visa to Europe. “In Estonia, it was easier, but we tried to get a German visa for the team and it is still there in the process. It’s been more than a month now,” says Deepak and adds, “Mobility is fundamental because if you’ve got part of the team in Europe and part in India, they want to work together sometimes. People have to move from one place to another. At least for entrepreneurs, governments should have better systems to provide visas faster.”

It is not yet a smooth path, but Deepak also says that one of the reasons he loves working in a startup is that he can explore. He is definitely doing that.