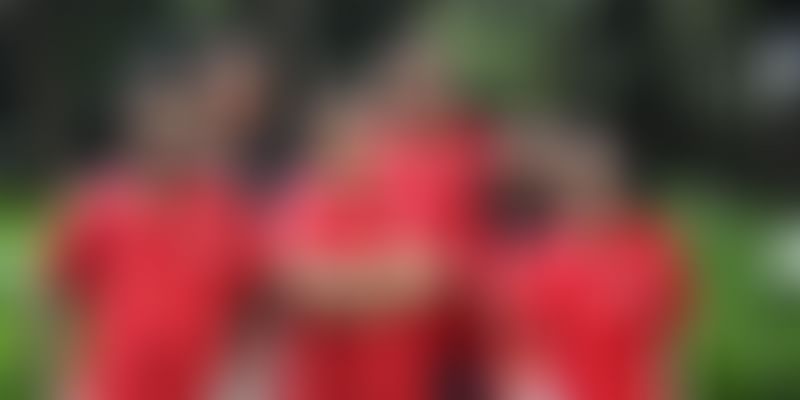 Although networking plays an important role whilst establishing oneself in the startup ecosystem, it is not an easy task. Often, people find themselves stuck at events having a large audience, and are unable to figure out whom to approach.

Wouldn’t it be simpler, then, if we could get the contact details and information of people we want to network with right to our phones, without having to input any details? This is where Cutting Chai Technologies come to play.

With their product Ohai, the team at Cutting Chai aims to take networking to a different level, by combining Internet of Things (IoT) and intelligence to get basic information about people and their interests by getting phones to talk to one another.

Having spent 18 years in the wireless mobile technology domain and having worked in the US, Anand Virani was handling Qualcomm’s smartphone referral design business in India. However, in 2014, Anand realised that he wanted to venture into entrepreneurship in the tech and wireless space.

Anand noticed that the world was moving towards IoT in a more serious way, where homes, offices and public places were beginning to transform.

“There were a couple of trends I saw in the digital world. One was that the smartphone was becoming all the more powerful and as people come together in large crowds it got me thinking, 'why not get phones to talk to each other directly without going through the cloud or Internet',” Anand explains.

He began to wonder if the phone could become a beacon and that gave birth to Cutting Chai. Though the idea was in place, Anand wasn’t sure what the product would be. A friend of Anand’s Gulzar Azad, Head of Access Programs, Google India mentored, invested and helped Anand in the project.

Gulzar led the WiFi project with Railtel, which was announced by PMO and Sundar Pichai earlier this year. On his interest in Cutting Chai, Gulzar says:

"I believe the ability for devices to communicate in proximity will redefine how people network.” Some other current and former senior professionals with Qualcomm, Google, YouTube, Future Group and Indostat are mentors in Cutting Chai.

Working on the prototypes

In June 2015, Anand started Cutting Chai Technologies in Powai, Mumbai. By late last year, he on-boarded an engineering team that worked on the prototype of the product. Anand explains:

The idea was to connect different devices with one another. We started with Android, as it is a much easier platform to work on. I got the first full-stack mobile wireless engineer on board in September, and the second person joined in October.

Last December, the prototype was in place. Anand explains the prototype: if there are four phones in the same physical space, they could talk and interact with each other. This, he adds, can be done by creating a mesh network. The four phones essentially should be able to recognise one another and talk to one another. It is like a local area network in a wireless network. If it is extrapolated to a larger base, Anand says, like in a public setting if there are 40 people with 40 phones, they should be able to talk to one another without being on cloud.

Workings of the first version

The first product was built with basic features where a phone could access the name of the person, information on what he or she does, things they like to do and their contact details. “While there are sites and online profiles that give one these extensive details, we wanted to keep it simple,” says Anand.

This was how Ohai, a networking app that helps users discover things about other users of interest to them, was born. Information could be their profile, common backgrounds, and contact details. When the phones are in close proximity, a user can filter profiles and check their details. The idea is to get people who have common connects, interests or referrals meet each other easier.

“We are focussed on young professionals. They exhibit the right balance of being curious and having the need to connect with like-minded people to further their professional careers,” says Anand.

Bringing in safety and security

Safety was a concern that often cropped up when the team spoke to people. Therefore, to ensure privacy and security, an Ohai user can turn off any notification or their visibility. When someone wants to connect with another user, both users get a real-time notification. The user can then decide whether they want to connect with the person or not. Only if a person accepts, the details are shared.

Currently, Ohai is present only in Powai, and the team intends to seed the product deeper into Powai and other areas of Mumbai. Anand explains:

The magic of the product happens when you have some density and people around you. We’ve done experiments at events and have even taken it to larger offices. We are targeting a user base of over 10,000 in Powai, after that we want to take it across Mumbai and then touch close to 1,00,000 areas. And, ultimately, globally.

The IoT space is rapidly growing. Reports suggest that there will be 80 billion connected devices by 2020. Machina Research Data glean the global market for IoT to be worth $373 billion by 2020, and India in turn will be contributing close to $10-12 billion.

Also, IoT has recently drawn a lot of attention from investors. Beyond Evolution raised a seed round while maker of smart electric scooter Ather Energy raised $12 million in May 2015.

Currently, IoT is big in the wearables space. Bengaluru-based Witworks, which makes smart connected devices in the home and lifestyle space, raised an undisclosed round of seed funding.

Already, many big players like Apple, Samsung, Fitbit, Xiaomi, and Titan have forayed into the wearable space. Other key players in the segment include Leaf Wearables, MyZone, and GoQii, among others.