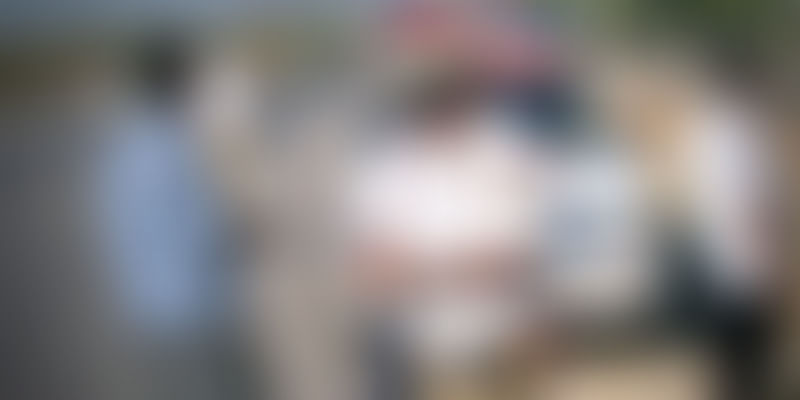 Trying to trick a traffic policeman by saying you don’t have cash to pay a spot fine will no longer work because at least in Bengaluru, he will be happy to accept plastic money.

The Bengaluru City Traffic Police has sourced 100 Point of Sale (PoS) machines, giving violators a chance to pay through cards.

Deputy Commissioner of Police (Traffic), Abhishek Goyal told YourStory that since November 8, when the government demonetised Rs 1,000 and Rs 500 currency notes, the traffic police department has been battling a peculiar problem as violators have been trying to get away by telling them to either accept the demonetised currency or by saying they have no cash in small denomination notes to pay fines due to the cash crunch.

In the last two weeks, the police has become stricter, asking people to arrange for cash and taking custody of vehicles till then. This has led to angry exchanges and office-goers being stranded on the roads till friends or relatives arranged for petty sums between Rs 300– 500.

As an interim measure, we have procured 100 hand-held PoS machines where violators can swipe their debit and credit cards. These machines will be kept with officers of the rank of police inspector and at traffic police stations only. This will reduce inconvenience and greatly provide relief.”

Bengaluru is the first large city to roll out such an initiative, which will come into effect after the Eid holidays next week. Nashik in Maharashtra, at the end of November, started a pilot project to collect traffic fines through PoS machines.

PoS machines are used by retailers and in a move towards becoming a cashless society post demonetisation, the Centre is encouraging the use of PoS and other hand-held devices wherever possible, including at toll plazas from December 2 onwards.

The Bengaluru City Traffic Police’s move should come as a relief to those already using plastic currency. Umashree Vishwanath, who parked her two-wheeler in front of an ATM and joined a huge queue, saw her vehicle being lifted onto a truck by policemen for parking in a no-parking zone. “Though I identified my vehicle, they first asked me to pay the fine. I did not have Rs 300 and explained that was the reason I was at the ATM. The officer would not budge and they took my vehicle away. I had to go back to the queue, collect money from the ATM, and go to the police station. But they did not have change as I got only Rs 2,000 notes from the ATM. As I had to pick up my child from school, I called my husband to ask him for change. He managed to arrive with Rs 300 and the whole process took nearly five hours,” the Indiranagar resident narrated.

There have been similar stories galore. Manish Sharma, who was flagged down for allegedly jumping the signal, had a harrowing time. “I asked them for a challan and offered to pay at a traffic management centre whenever I get cash. But they were adamant that I park my car on the side, hand over the keys to them, pay the fine, and come back to collect the vehicle.”

Sharma had a heated argument but to no avail. An officer explained that if a violator is flagged down and handed a challan, a spot fine has to be paid in cash. Only if a notice is stuck on the windshield or if it is posted to your address, can the fine amount be paid at a Traffic Management Centre or at Bangalore One, a government citizen-centric service centre where utility and other government-related payments can be made.

As Sharma had no cash, he had to call his friends to arrange for it, and finally one of them came to his help. “I was stuck on the road for more than two hours because they did not have any other way of accepting the fine amount.”

Goyal says traffic violators like Sharma need not worry anymore. “We are in the process of opening a current account with a bank where all the money from PoS collections will be deposited.”

As for security, he says it’s the same as paying any retailer. “Once the card is swiped, the password will have to be keyed in by the card holder and two receipts will be generated — one each for the violator and the police department. The police have nothing to do with this and it’s a simple card-to-bank transaction,” he allays fears.

This is an interim measure as the Bangaluru City Police has called for a tender to upgrade from their Blackberries to Android devices. In a little over three months, once the new system is in place, all traffic policemen from the rank of sub-inspector will be authorised to carry PoS devices along with a printer and Android device, increasing the acceptance of plastic currency.