Rejected by employers due to Muscular Dystrophy, this 26-year-old today runs his own e-vehicle company 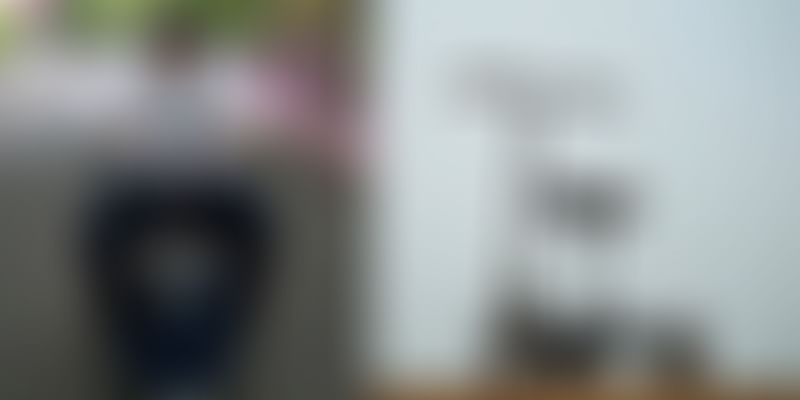 26-year-old Naidhroven suffers from Muscular Dystrophy since birth. He has however, broken all stigmas, and has turned his dreams into reality. The Chennai boy today runs an automobile company that designs and manufactures e-vehicles which run on green technology. Rejected by companies for employment, Naidhroven, an MBA graduate, plunged into entrepreneurship to start his own company.

Naidhroven’s dream of becoming an automobile engineer was shattered after his high school teacher advised him to opt for commerce instead of science. She told him that it would be difficult for him to commute to labs if he takes up science. Naidhroven did as he was told and opted for commerce. He then went on to complete his degree and MBA from Anna University.

Affected by muscular dystrophy, a genetic birth disorder, Naidhroven’s life was not easy to handle. But having inherited the disability from his father, he was always well prepared to face life with confidence.

Muscular dystrophy is a group of muscle diseases that results in increasing weakening and breakdown of skeletal muscles over time. Doctors had predicted that the disease would pass on to the third generation from Naidhroven’s father. But, fate played its part and Naidhroven showed symptoms of the disease as he grew up. Since his family was aware of the disability, they immediately took necessary medical care. In the initial stages, Naidhroven could walk but with difficulty. He was preparing himself for the worse as he knew his body stability would worsen over the years.

“I was preparing myself to face life as the disease worsened every year. I thought I would be in a wheelchair only by 30 but unfortunately, I fell down when I was doing my MBA in 2010 and my hip was dislocated, making things worse.”

Naidhroven's ankle was broken too. He had an option of undergoing a surgery for hip repair but there was a chance of failure. So, the doctors suggested him to leave it to time to heal things. That’s when he was forced into a wheelchair for the rest of his life.

“Previously, I had the fear of falling down or walk only with a support or help of somebody. Now I feel independent and confident enough to do things and commute well,” says Naidhroven.

It was then his father, an engineer, designed a compact scooter for his use. And that eased Naidhroven’s transition from standing to sitting. That’s when Naidhroven decided to make the scooter bigger and ready to be used on roads. “Owing to my passion for automobiles since my childhood, this was my golden ticket into the automotive industry,” says Naidhroven.

After his MBA, Naidhroven dreamt of working in big companies like Google but was denied job by most companies indirectly citing his disability.

“I felt dejected at that point, but now I feel the decision of not offering me a job has actually pushed me to pursue my dreams. “

Golden ticket to become an entrepreneur

Naidhroven started researching the market for startups. He spent two years freelancing, developing ERP systems for small companies, from various industries such as hotels, hospitals, e-commerce, manufacturing concerns, and many more. This allowed him to understand how the company’s operational workflow is laid out systematically and gave a whole different level of understanding to make his business plan more realistic.

“My dad and I designed our own personal mobility scooter. I wanted to take up this project as a business and my family provided the moral support which encouraged me to start up. Since then we have done extensive research about the product and also fabricated dozens of different prototypes after gathering data from people’s feedback for each prototype.

“It was then I was asked to apply for an accelerator programme in Germany as they liked my prototype, but due to some reasons they rejected my proposal. That’s when I strongly decided to put-forth my prototype into action and started my own company.”

Naidhroven started Nappinnai in February 2016 with a seed funding of Rs 10 lakh from TN state government, under the Prime Minister Employment Generation Programme (PMEGP). “I put together a team inspired by my motive and vision and now we are all in sync working towards my vision,” says Naidhroven. He also acquired second round of funding of Rs. 11 lakh from his family and friends.

Made in India E-scooter

Born as a necessity, Chennai-based Nappinnai evolved into a consumer-oriented business. “We belong to the automotive sector and focus only on designing and producing green (electric) automotive products. The green revolution in the transportation sector has begun and we are not just moving along with the wave but creating a tide that will sweep everyone off their feet. We want to educate the people about the necessity of using electric products and Scotra CML will do that. We do have other products in the pipeline due for release, once Scotra CML has achieved its purpose,” says Naidhroven.

“Personal mobility has been a dormant market in our country. The dormancy is owed to our road infrastructure. But we came up with the solution. Our vehicle’s engineered design negates these problems and gives a smooth ride perfect for our Indian Roads.”

“Scotra CML is a local distanced electric vehicle priced at Rs 25,000 for the basic variant and goes up to Rs 69,500 for variations in range. This price is the most affordable in the personal mobility market,” says Naidhroven.

Scotra CML is a completely Made in India product. Twenty percent of the raw materials are sourced from outside the country owing to their unavailability in India. However, Naidhroven says that their R&D activities are close to finding a more sustainable solution that is abundant in India. Every other material is sourced from Chennai and our manufacturing processes are outsourced to sub-manufacturers in and around the city.

“We are ready for production at this moment and the orders are lining up, and we are looking for investment to take our vision to the next level. But since it’s a capital-intensive project, convincing investors is a tough task. Also, most VC’s and Angel investors I have met hesitate to invest in our company expressing concern over its sustenance owing to my physical disability.”

Currently, there are 15 full-time employees, with additional help from interns and consultants hired whenever necessary. Nappinnai is looking for equity funding to speed up their production plans and establish distribution channels to deliver their product across India.

Naidhroven considers Nick Vujicic as his inspiration in life and feels physically challenged people have still not reached greater heights in business across the world. He dreams to build a car which is completely inclusive to all kinds of disabilities and that is how he wants to give back to the community. This young entrepreneur bids adieu saying,

"In a world where physically challenged people are encouraged to get a job and secure their future, I choose to follow my passion. I don't do this to get recognition, but I do this to show people that, limitations are with their mind, not their body."