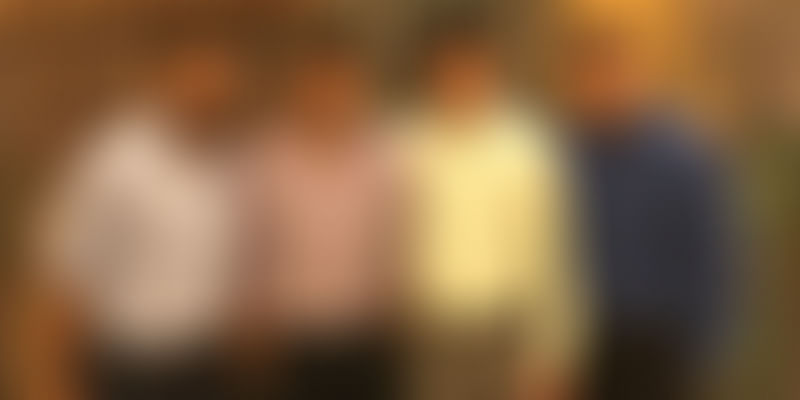 The traditional mode of marketing has undergone a sea change in the last decade, with digital advertising proving to be the biggest game changer. However, radio advertising, which has been around for a century, seemed to have remained immune to such changes.

So, four friends – Nirav Shah, Ishan Doshi, Sahil Mehta, and Anuj Shah – thought of leveraging both the digital and audio platform to create a new form of advertising. They observed that every traditional advertising medium had a digital alternative but there was no digital competition to radio. In their view, there were lots of brands which wanted to explore more options of advertising platforms and they're primarily looking out for more innovations along with the right target audience.

Last April, they came with a solution and named it Rappio, a digital audio advertising platform. They initially invested around Rs 6.5 lakh which went into product development, user acquisition, and retention. Thirty-one-year-old Nirav, Co-founder of Rappio, says,

“The advertising platform replaces the ringtone of a mobile phone by an advertisement jingle and the users earn money on the go for every incoming call.”

He adds that the main purpose of Rappio as a digital audio advertising solution is to give brands a new platform to market themselves and create a new category in digital space. The platform has already run campaigns of Start TV, Hotstar, Rupay and the Samajwadi Party.

The Mumbai-based platform claims to give measurable RoI to advertisers and monetary benefit to users.

The revenue model is cost per play (CPP) with advertisers. Nirav explains that, on an average, every mobile phone user gets at least 15 calls a day. At the rate of 20 paise per ringtone played, the user can earn at least Rs 90 monthly, which is more than the average revenue per user (ARPU) for the telecom industry.

“Currently, Rappio is in pre-revenue phase and we intend to start earning revenues from April 2017.”

This year, the platform has entered into a partnership with Pocket Money and is also available to the nine million users of the Pocket Money app.

However, Nirav accepts that client acquisition isn’t going to be a cakewalk. The main challenge is going to be acceptance of this new unique audio advertising platform.

Nirav feels that with around 300 million smartphone users in India, the potential for growth is very high. Simultaneously, the Indian digital advertising market has been growing at 15 percent. Most brands are looking to rise up from the cluttered digital space and make their own mark with unique and engaging campaigns.

Besides, the platform is also looking at strategic tie-ups that will give its users an extended scope to redeem their money earned through Rappio on different platforms like aggregators, e-commerce marketplaces, and all types of digital avenues.

The platform claims to be in indirect competition with radio and plans to corner up to two percent of total radio advertising market in three years. With their jingles ringing across, Rappio promises to be a subtle yet effective way to give consumers and prospects a perfect brand recall.

Digital advertising in the country is expected to cross the Rs 25,500 crore mark in 2020, growing at a compound annual growth rate (CAGR) of 33.5 percent, according to a CII-KPMG report. Simultaneously, radio advertising revenue is expected to double by 2020, to an estimated Rs 3,900 crore from Rs 2,000 crore in 2015, a rating agency Crisil report says.

The digital audio space has players like PayTunes, which aims to equip advertisers and brands with a targeted advertising medium to reach mobile consumers through audio-visual advertisements.

In September 2015, PayTunes raised $100,000 from CIO Angel Network. In June 2016, it received around $500,000 in pre-Series A funding from Indian Angel Network (IAN) and CIO Angels, along with Apurva Parekh from Pidilite and Sanjay Mehta.

Besides, there are platforms that offer talk-time to their users. SlideApp, Unlockar, and Paisa Swipe, among others, are unlock screen apps that offer rewards to users on unlocking their phone.

According to EY, demographics are all stacked up in India’s favour as far as digital consumption is concerned. Inexpensive smartphones and the rollout of 3G and 4G broadband infrastructure are merging rapidly to boost traditional distribution and democratise online access. Together, these factors are laying the foundation for accelerated digital media consumption.