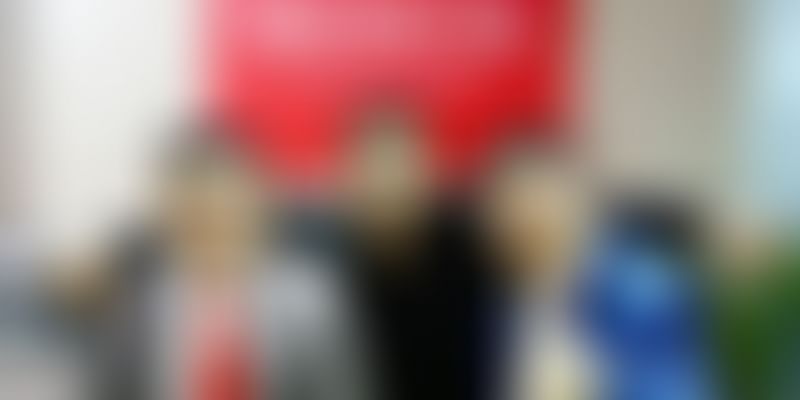 The Gurgaon-based platform's services are pertinent at a time when startups are shutting down, laying off employees and changing business models.

Friends for over two decades, Puneet Chandra, Ankit Jain and Anuj Saxena, all in their thirties, had joined hands twice in the past to start companies—Apical India, a reality venture, and BCube IT Services, which was outsourced call centres for corporates.

Startups like Zomato, Foodpanda and Cardekho used BCube IT Services' infrastructure to seat their call centre agents. But as these companies raised venture capital, they moved out and invested heavily in setting up their own offices in expensive locations.

But the thing with startups is that everything is up in the air for the first few years. So many are forced into giving up their swanky facility and downsizing as business priorities change or take a turn for the worse. Puneet explains,

“This made us realise that today’s agile businesses needed a dynamic solution for office spaces, which could expand as they required, and reduce as their business went through ups and downs. Thus was born Skootr, a managed plug-and-play office space concept.”

“Our delivery model focuses on understanding the client’s requirements, shows them a few options, and then the finalised version is designed and created according to the client’s requirements. The billing is done on a per-seat basis where services are inbuilt in the seat price. The concept or model is to provide standardised office spaces. When you take a Skootr space, you know what you will get,” Puneet says.

Started last January in Gurgaon, the trio's idea received validation when they closed their first big contract for 600 workstations from a single client based out of US, and then another 100 workstations from Magic Bricks. Currently, they are a team of 35 people.

The core belief at Skootr is that businesses, which today have to move fast to remain relevant, will be slowed down when capital is locked up in setting up office infrastructure.

“Businesses today need to get off the ground quickly, experiment with projects and in new geographies. But every growing business still needs an office that can cater to its two most basic requirements–accessibility and functionality,” Puneet adds.

The startup has over 1,500 users, and has offices in Gurgaon, Jaipur, Noida and Mumbai.

Skootr provides state-of-the-art offices and workspaces, flexible timings, 24x7 support services, high-speed Internet, concierge support, power backup, multi-city address, as a part of its premium offerings. The work stations can be customised according to the requirements of entrepreneurs and corporate enterprises.

While acquiring the first set of customers wasn’t easy, the founders' experience with their first startup helped.

“It was quite hard to convince the initial set of customers to shift from a traditional approach to a now modern co-working one. Skootr today has converted more than 1,500 users—who were initially looking for traditional offices spaces—into plug-and-play flexible offices,” Puneet says.

Currently, the co-working space is witnessing a bullish phase in the market. Awfis South Asia’s network of collaborative co-working spaces raised $20 million in Series B funding led by Sequoia India. There also are other established players like Y-combinator's Innov8, InstaOffice, and AltF Coworking.

There also is the New York-based WeWork, which has a presence in 15 countries and is all set to open its first Indian centre in Benglauru.

According to Puneet, Skootr's diversified customer segment, and the startup's model of not being dependent only on other startups only makes it stand apart. He says,

“We bring in great price advantage as we work with under-utilised spaces with double shift utilisation. We are focussed on multi-city growth, especially Tier II and III cities. Also, we have a defined offering for large corporates who would like to have a plug-and-play managed office space, which gives them great agility at lower costs.”

In less than a year since Skootr began operations the team claims to have grown to manage 1,00,000 sqft of office space, with over 1,500 seats across seven facilities in four cities with 60 clients.

“We wanted to prove the model and build healthy cash flows before we raised more funds. We are now ready and are in talks with venture firms to raise our next round of investment, which will help us to expand our stable and profitable business model across more cities.”

The team intends to enter Hyderabad and Bengaluru and is also in the process of increasing the seating capacity of their existing premises from 1,000 to 2,000.

“We envision expanding our network to 30 cities and increasing our capacity to over 1,00,000 seats across the country over the next two to three years. We are also looking at promoting our franchisee model for greater service penetration on a pan-India level,” Puneet adds.