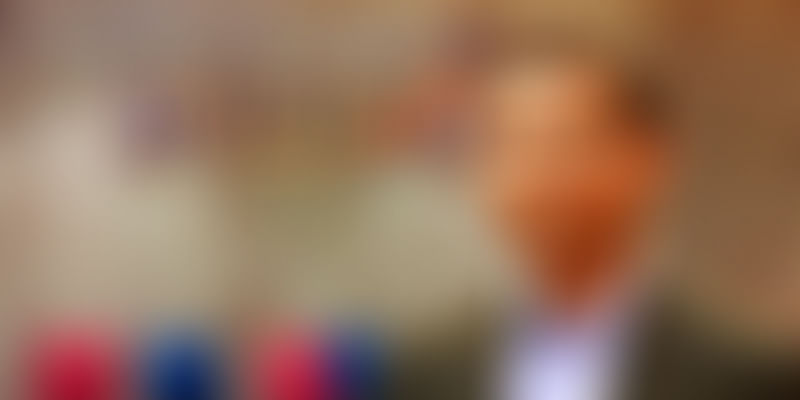 While the name Sodexo was synonymous to meal vouchers for a decade—new players and newer technologies in the finance space have given the VP of Marketing Suvodeep Das a chance to spice things up at the company, in order to maintain their staggering lead.

The typical Sodexo coupon booklets had almost become generic to the category of employee-benefit meal vouchers, and they had enjoyed a near-monopoly for at least a decade and a half since they washed up ashore in India looking to take the space by storm 20 years ago.

However, the nature of financial transactions in general has witnessed innovations at a never-seen-before rate over the past few years, what with the advent of UPI, wallets, and what not. And the meal vouchers space was quick on the uptake. Not only did various other players like Paytm, Zeta and Udio spring up swiftly, they had digital in their DNA, and big dollars up their ante.

Here’s how Sodexo transformed its identity and weathered the storm gracefully in order to stay on top in the face of growing competition.

Sodexo has been in India since 1997, providing employee benefit services to over 11,000 companies across private and public sectors.

“India was seeing a huge increase in demand for talent thereby increasing the need for high-quality employee benefit services to attract, motivate and retain them,” recounts Suvodeep Das, VP, Marketing at Sodexo, about its foray into the Indian markets.

The company currently offers meal and gift benefits. Their clients pay a service fee to Sodexo for administering these benefits to their employees, and the merchants pay Sodexo a fee for getting increased footfalls. Their merchant acceptance network extends to 1,500 cities and towns across India.

To be, and how to be

However, managing paper currency is quite a hassle. Various studies have pegged the total expenditure incurred by the Indian banking industry managing cash on an annual basis at Rs 20,000 crore.

Over the course of the lifetimes of these coupons, they need to be acquired/printed, stored, transported, and finally, redeemed. This requires a lot of investment of time, capital, and effort. Moreover, employees also have to carry around bulky booklets in their wallets, as paper-based vouchers are often not redeemable online.

Over the years, they had market leadership in the meal benefits segment through 3 million daily consumers. But, with great power comes great responsibility. They had been receiving feedback from clients as well as themselves observed that for the increasing number of millennials in the workforce for whom digital is “a hygiene factor” in their life, a digital solution was overdue.

“When I started working, there were no mobile phones even, and today people use mobile payment solutions by default. We started getting inputs from our clients saying that now the time is right to introduce digital solutions because this generation of the workforce will need it,” says Suvo.

In fact, globally, Suvo notes that 60 percent of their business is digital. “We created a unique, proprietary closed-loop acceptance network for our digital solution for meal benefits; while still being a part of the larger acquiring ecosystem to ensure that we have a 100 percent compliant solution,” he says.

The company decided to go digital in 2014. However, they launched their digital solution only in February 2016, because it took them time to build their own proprietary digital network to access the Sodexo card. “The idea is to replicate the width and depth of the meal voucher network on the card,” he says.

As anticipated, the biggest challenge for them was how to enable digital acceptance on their meal benefit network in 1,500-plus cities and towns across India.

Almost 10,000 grocers and restaurants out of the 30,000 terminals in their network had never accepted any form of digital payments, and Sodexo was the first digital solution they had ever experienced —the timeframe in question here is a year and a half before demonetisation.

“We deployed foot soldiers for what is an on-going orientation activity to help the merchants acclimatise—how to change paper once the printer runs out of paper. It was a huge education exercise. But it helped us develop even stronger bonds with the retail network,” Suvo states.

Today, if you go to a Food Bazaar and tell the cashier that you’re paying with Sodexo vouchers, they will press a button and all your food and non-food items will get clipped. Sodexo wanted to make sure that this happens for the card as well.

“The voucher is simple because you use voucher for that much money. What happens in the case of card is the transactions flow directly from the EDC terminal to Sodexo, for which, we work with payments companies like Pine Labs and Worldline, among others. We had to request our retail partners to reconfigure their system across their network, so that took a lot of time,” he explains.

Their card is now being accepted in 32,000 terminals in 900 cities across India, and will soon be deployed across all the 1,500 cities that accept the vouchers, he reveals.

The company issued physical cards early last year, and launched its mobile app last June, which carried their mobile payment solution in January this year. Lastly, the card for their gifting business will be launched in the next 2-3 months.

Being a services business,- Sodexo’s philosophy has been to focus on what they do best as well as tap into the expertise of their contemporaries to consolidate their standing. Their partnership with Zeta stems from this very thinking.

“Zeta has a very strong technology solution and they also realise that we have a very good service mindset. We take care of our clients; we have built very strong relationships over the last 20 years. So we decided to combine our strengths,” Suvo says.

In Suvo’s tenure that coincided with the arrival of new players backed by robust names and treasuries, one key challenge was to create awareness among clients and consumers that Sodexo is not just a physical meal voucher company, but also a digital one.

“We are ubiquitous, literally generic to the category, so awareness is very high—albeit as a paper voucher company. We indulged in heavy marketing, in terms of one-on-one engagement, creating fora to communicate that we are a digital first company,” Suvo says.

Suvo approached this exercise with a three-pronged approach. First, by increasing Sodexo’s online presence, so that anyone looking for a meal benefit or a meal card across any digital channel or mobile channel would stumble upon Sodexo. Second, by directly targeting the employees, through townhalls, social media forums in the hope that they approach their HR to incorporate Sodexo’s digital solutions into their suite.

Third, instead of hard-selling their digital solutions, they focused on creating content which the HR fraternity finds useful, like their blog and a forum they sponsor called chroforumindia.com which is a community to get the top 500 CHROs in India and facilitate peer-to-peer conversation.

“There is no Sodexo advertising there. We just want to create a platform to encourage conversations and if we can add any value to the conversation. We do so, so that the client sees that we’re not just trying to sell to them all the time, but are also trying to add value to their experiences,” says Suvo.

They have also released two editions of the HR Best Practices Book, and distributed the physical book and the e-books to their clients.

“Content marketing is key to our marketing strategy. We do an HR round-table almost every alternate month, where we invite select senior HR leaders to discuss matters relevant to the industry,” he explains.

As the RBI mandates prepaid payment instruments like meal-voucher companies to go digital by the end of the year, Sodexo now intends to focus fully on digitising the meal and gifting solutions. The new players that have entered the market like Zeta last January and Paytm this April —or even NiYO, a startup that helps save taxes by loading a part of the salary on a card with limits on expenses under various heads including food - offer pure technology solutions, while employee benefits is a complex subject that requires a different skill-set, opines Suvo.

"Technology is just an enabler. Sodexo continues to have the majority market share in the market. Sodexo’s share is estimated to be thrice the combined share of all other players in the market," claims Suvo.

Once they find their feet in that space, they will take on their fitness and financial wellness offerings on their wellness benefit platform.