If Budapest has bath parties, Mumbai has 'painting parties': Meet the woman behind them 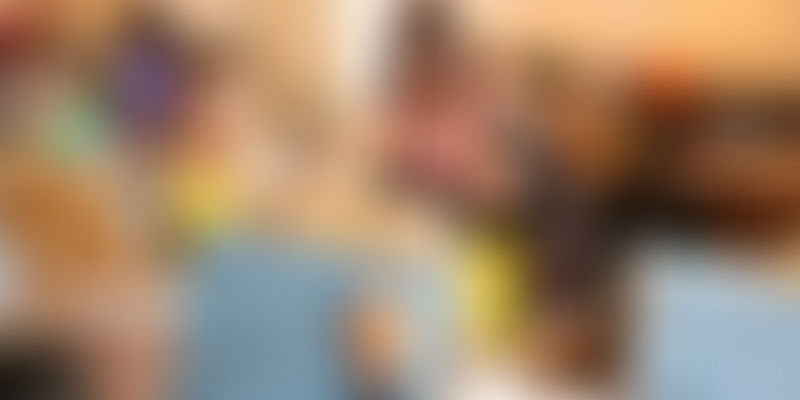 Snehal Patil’s Bombay Drawing Room brings out the artist within with "painting parties," that help you unleash your creativity in an atmosphere of fun and frolic.

After years of partying at indistinguishable bars with the same music, and seeking meaning in fleeting conversations with fellow-patrons in the ladies room, a certain poster plastered on the walls of Café Zoe, inviting me to a “paint party” – a term and concept that had started to go viral in Mumbai - felt like an intriguing proposition.

I signed up for a Sunday afternoon gig.

My favourite Lower Parel haunt looked the same, but felt different. Lined with art material and easels that we were asked to sit beside, we were soon thrown into a reverie where conversation and creativity was as free-flowing as food and drink, where my stress was alleviated one impassioned stroke at a time, as I attempted to sketch an Italian balcony with the help of instructions of a woman up front.

When I went to thank her for setting me free, I learnt that this venture, an absolutely incidental phenomenon, is something that did the same to her – so much that she quit an immensely high-paying job at a leading real estate company to turn this passion project into a business for her, and a way of life for her patrons.

It happened one night…

Snehal grew up in Nashik in a middle-class family, with a love for painting that endured through all the other phases of her life. She studied architecture in college, and once she embarked upon a corporate career, she had little reason to quit.

By 27, she had already spearheaded the construction of a 21-storey tower in Dadar for Omkar Real Estate just two years down in her career and single-handedly managed and improved the process of innovation across all functions at Kalpataru. She had started with a salary of Rs 15,000 a month in 2011, and reached Rs 1.25 lakh in four years; success, stability, fulfillment, and predictability reigned together.

But an evening meant to celebrate how well life was going in general, is what rocked the boat. "On August 28, 2015, we were planning to host some people at our home. But since the standard eating and drinking scenes get monotonous, I decided to do a "Paint Party" where I’d hand my guests the material and teach them how to paint something. I made a page as a joke to make my friends take this invitation seriously, and called it Bombay Drawing Room," she recalls.

This party was unprecedentedly successful.

"The pictures on the page went viral and other friends who missed the party wanted us to host one again, which we did, the following month. And then again. And again. Before I knew it, strangers were flocking to our house for these parties through referrals,” she says, of this purely on-the-spur idea.

As footfalls rose, she started keeping a contribution box for covering the cost of material. And as the box started to fill up, so did her sense of ambition. Soon she knew it was time to take it outside the drawing room.

This, however, was not her first time trying to start an art-centric venture.

Sometime in 2015, seeing how her then boyfriend and now husband reacted to a painting that depicted him, she started Mused | Art to create personalised art for people for gifting and commissioned art for real estate and other institutions. However, since it took too long to take off, Snehal decided to shelf it.

But she chose to focus on the lessons she learnt on how not to start up. These included - not to work from home, starting the day early, and not being ashamed of asking for help from loved ones – the last one being the hardest to internalise.

As Mused|Art was barely making her Rs 5-10,000 a month, she was financially dependent on her husband for a year, and with great effort, she taught herself that money is not equal to dignity.

Undeterred by her past and brimming with confidence about the future, she took the plunge again, and hosted its first public event in two months at The Hive. "We were overbooked. I had found my calling - making art accessible to people," she says.

Simultaneously, she kept increasing the frequency of events. The model she froze upon, eventually, was all-inclusive “Paint Parties” with art supplies, instructors, and food and beverages.

She saw that it mainly attracted urban millennial working professionals, looking to unwind, but also seeking a creative outlet. So, she started packaging BDR sessions as parties in two-hour accessible and fun formats, with food and drink to add to the “cool” quotient.

“Initially, we rented workshop venues but I soon realised that people found it boring to come to ‘dead’ spaces. People make plans to go to bars and restaurants more easily. And they anyway go empty during afternoons, so we gave them a fun activity to host during non-peak hours, and started working on a revenue-share basis. It was a win-win situation, and the sales started getting better,” she states.

From doing events at locally known bars like Road House Bluez, she moved on to even more mainstream spaces like Café Zoe, Hoppipola and the chain of Socials. While she was doing around three events a month in June 2016, by December, that number almost tripled.

Private and corporate event inquiries also started flowing in, so two main arms emerged - its own events which were the general public could buy tickets and sign up for, and private parties hosted for individuals or corporates, for which Snehal charged a lump-sum fee, and where art became a tool for team-building. The focus was on bettering employee motivation levels, bringing out their creativity, etc. Her corporate wing started to flourish as Asian Paints, Taj, Bain & Co, Cambridge International, Sony pictures, Four Seasons tied-up with Bombay Drawing Room.

Festivals started inviting BDR to host sessions as well, the biggest being the Kala Ghoda Festival – one of Mumbai’s most prominent gatherings of art aficionados.

“It was my dream to work with Kala Ghoda. We had a hundred participants, and more than a hundred were turned away. From this point onwards, my approach to BDR changed from a weekend fun activity to something that could become a movement,” she says.

Post an investment of $100, the venture has been cash flow positive, and she had garnered about $100,000 in revenues so far.

In February 2017, the Bombay Drawing Room movement took its first steps toward going national – and Bangalore Drawing room and Delhi Drawing Room were launched by roping in multiple artist partners. Today, it conducts more events than there are days in a month.

As a young bootstrapped venture, behind the scenes is a young frenzied team, trying to manage the tedious logistics involved. “It’s painful and tiresome, transporting the materials, etc., especially because of our frugal approach and the need to maintain sound unit economics,” she says.

She has now set her sights on a country-wide expansion spree, and looks forward to a presence in all metro cities by the end of 2018.