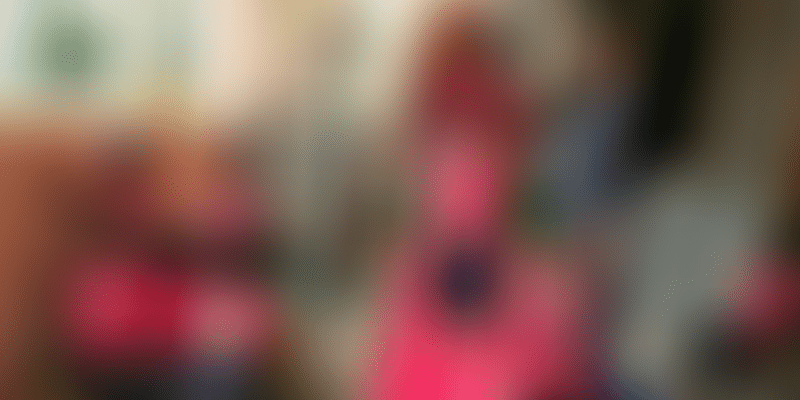 Diya Ghar focuses on early childhood care and education, and on nurturing children to help them become healthy adults.

“From birth to six years of age is crucial in the development of a child. In Bengaluru, there are more than 40o,000 underprivileged children,” says Saraswathi Padmanabhan, founder and director of Diya Ghar.

The organisation’s website says around 1.3 million people live in the slums of Bengaluru, constituting 17 percent of the city’s population. Saraswathi and her husband, Shyamal Kumar, would often see children of construction workers playing in construction sites as their families lacked basic amenities.

“Our hearts went out to them, and in 2016, my husband and I started Diya Ghar, a Montessori pre-school,” recalls Saraswathi.

Swetha, Yeresh and Gayatri live in a migrant settlement close to Diya Ghar in Rammaurthynagar, Bengaluru. Their parents are construction workers who hail from Raichur. The children would go to the construction site with their parents, and four-and-a-half-year-old Swetha take care of siblings, three-year-old Yeresh and one-year-old Gayatri.

Swetha and Yeresh were among the first enrollments at Diya Ghar in 2016, and Gayatri joined this year. Saraswathi wants Swetha to join Class I in 2018.

In all, around 30 children attend Diya Ghar every day. The organisation’s team of seven visits settlements of construction workers, and interacts with parents. Since these children do not go to school, the team first educates parents on the need to send their children to school. They enroll children from families who have lived in the area for at least two years, and plan to stay on for a couple of more years.

The focus is on early childhood care and education. “We cater to children’s physical, emotional, social and cognitive needs,” Saraswathi says.

The children are picked up at 8.30 am and given a wash and change at school. After breakfast of porridge and fruit, they have language and math classes. Post a nutritious lunch, they have art, craft and cultural activities. The children are dropped back home at 4.30 pm after milk and evening snacks.

Diya Ghar takes in children between the ages of two-and-a-half years and six years. While Saraswathi brought in initial funds from selling a property she inherited, now, donations from well-wishers, friends and family have kept them going.

A recurring challenge that Saraswathi faces is that construction workers move around, and often go to their villages for months on end. The need for their children to go to a pre-school is a challenge to impress upon them.

Saraswathi says, “About 15 children spent anywhere between a month to a couple of months before moving back to their village or to another part of Bengaluru. Every day spent with us is a day away from potential abuse and neglect."

"We were also able to emphasise the importance of education to the parents and help them envision a different future for their children. The result is that about 50 percent of these children have been enrolled in government schools of their village,” she adds.

Diya Ghar runs in a rented space of 900 sq ft. In January 2018, it will move to a 2,000-sq-ft premise that can accommodate 60 children. The organisation is on the lookout for partners to sponsor the setting-up cost for its new premises.

Saraswathi’s vision is to establish pre-schools and day care centres for children of migrant workers in Bengaluru and different cities of India. Each centre has been envisaged as a Diya Ghar, a source of light and education to communities in the neighbourhood.