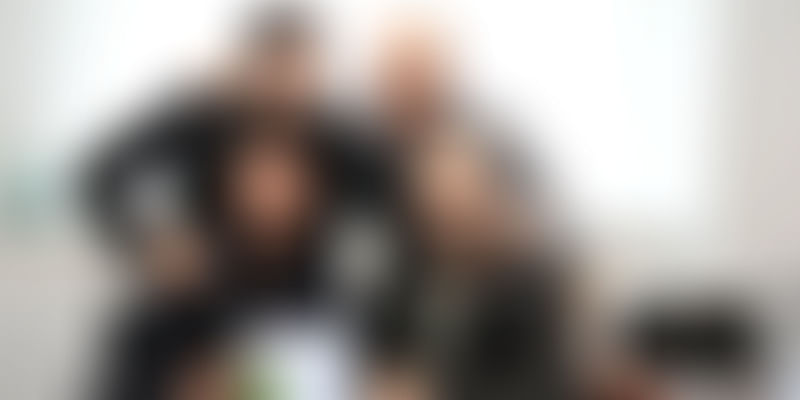 Evja’s system is based on sensors and predictive algorithms to help farmers make better decisions.

Where is it based: Italy

The problem it solves: IoT-based analysis for better agricultural produce

With an intent to make a difference using Internet of Things (IoT) in the food market, three friends Davide Parisi, Antonio Affinito and Luciano Zarulli — all in their thirties — started Evja. The trio was joined by Paolo Iasevoli (30) when he moved back to Italy after a few years spent working abroad.

Evja is a platform that helps farmers make better decisions using a system based on sensors and predictive algorithms. The startup was born in Naples, Italy, in summer 2015.

Their product hit the market last year, starting from Italy, and Evja is already moving forward with partners and customers worldwide.

Paolo says, “We really wanted to use our IoT know-how to do something cool in the agricultural market. Agriculture is a key area globally, due to issues such as overpopulation, pollution and deforestation. We thought it would be great if farmers could really understand what was happening on their fields.”

Evja’s founders created OPI, which stands for O.bserve P.revent I.mprove. It is a decision support system (DSS) designed for the agribusiness — a network of sensors collects all significant data from the field and sends them to a central system. All the data is crossed with weather reports and processed through predictive models for pruning, pathogens, and irrigation.

The final information is accessible on one’s browser, smartphone, or tablet. With OPI, the firm claims that farmers can save money, time and water, and lower the usage of pesticides for healthier produce.

Paolo says, “OPI works like a translator, that makes farmers understand their cultivation. They can forecast adverse weather conditions and prevent plant diseases.”

People behind the idea

The CEO Davide Parisi has a background in law and business, and has managed other startups in Spain. Antonio Affinito, the CTO, has several years of experience as an engineer in Finmeccanica, industrialising radar systems around the world. Luciano Zarulli, CIO, managed projects for more than a decade in Accenture, working all over Europe, Middle-East, and India.

As CSO, Paolo takes care of the business and marketing side of Evja, and has over 15 years of experience as business development manager and country manager for a few multinational companies of the digital and mobile markets.

Evja has a total of 15 employees including consultants.

Evja has also been selected to take part in a few accelerators, including Startupbootcamp Foodtech, RWA’s Agro Innovation Lab, and TIM WCAP.

Paolo says, “Each one of these experiences have pushed us farther towards our goal. We have been invited to present our product at SMAU Berlin 2016, at the World Agritech Summit in San Francisco (as the only non-American company), and most recently at the World Food India in New Delhi.”

Adding he said, “In India, we can also count on the support of the Italian Embassy that fell in love with our project. All of this was fundamental to our growth which hit its apex in December 2017, when German company BayWa and Austrian company RWA liked Evja so much that they purchased shares of it. Now we feel even stronger, backed by two of the largest players of the market.”

Talking about the objective behind the startup, Paulo says, “We wanted to help advanced, modern farms with high agronomical know-how to further improve their performances, by helping them save time and money and, more importantly, obtain a healthier produce.”

On the other hand, they wanted to support farmers with low agronomical know-how, those who have scarce resources and not so advanced tools. For that, they came up with a software that performs like the most advanced ones in the market, and looks like an iPhone app.

It gives one an insight into what’s going on and what will happen on the fields, without the need of an expert. “You just fix the box on your plantation and turn it on, and then you can access that area through our website. No installation and no setup required,” Paulo added.

Bootstrapped so far, the startup is looking for the first investment round in January 2018.

The sensors collect the most relevant factors, which vary based on the cultivation, but are usually temperature, humidity, leaf wetness and solar radiation. The farmers can see in real time, on their PC or mobile, the data coming from each one of their fields.

So, just with four sensors it can provide advanced information, all readable at a glance. This also means that a single agronomist can manage fields on the other side of the world, and provide remote assistance to the local farmers.

The system uses both a mobile connection and the LoRa network, a new technology that allows to cover a very large area with a single antenna. It even works well for farmers with low agronomical knowledge, working in remote areas.

According to Paolo, “We will have to work really hard to cater to all the demand in the Italian market. At the same time, we are evaluating partnerships in India, Bangladesh, Middle-East, Africa and South America. Together with the first investment round, our hands will be pretty full the next few months. And we couldn’t be any happier.”

The revenue model is based mainly on direct sales and on a double pricing system. The company usually sells OPI as a bundled solution with a one-shot fee, including the hardware and two years of software licence.

It also has a renting model that includes hardware and software with a monthly fee starting from €50 per hectare. After starting its sales in the summer of 2017, Evja now serves over a dozen of major companies.

Although there are companies using different means of monitoring, such as weather stations, drones or satellites, the Evja team considers them as potential partners, because, Paolo says, “We have developed our software platform to be highly modular. It means we can integrate third-party systems in OPI, and have them work seamlessly for the farmers.”