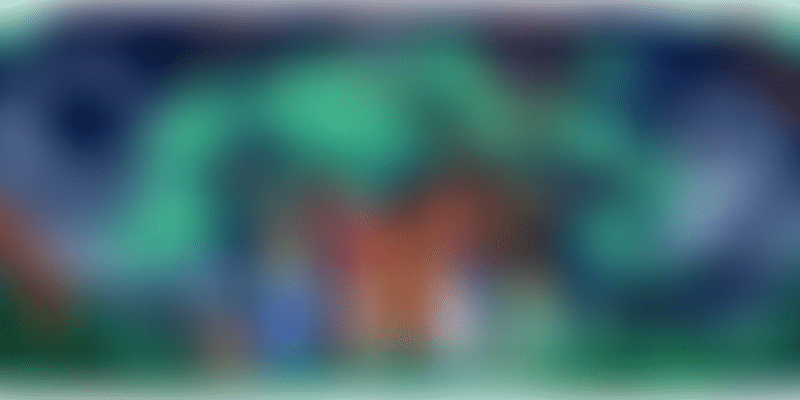 The movement, one of the prominent ones of the 1970s, united people to fight for the cause of tribals and the marginalised people.

March 26, 2018 marks the 45th anniversary of Chipko Movement, the forest conservation initiative of the seventies that continues to resonate in India as one of the biggest triumphs of an indigenous citizens' right to forests. The movement marked a watershed movement for how grassroots activism can influence policy-making regarding shared natural resources.

Google celebrated this anniversary with a doodle, illustrated by Svabhu Kohli and Viplov Singh. Taking a leaf out of history, the illustration depicts four women dressed in traditional attire, holding hands and forming a chain around a tree. With a forest in the background, the fauna and flora bear witness to this scene of solidarity that is played out on a starry night.

Poetess Ghanshyam Raturi summarises the zeal behind this movement through this verse,

“Embrace the trees and

Save them from being felled;

The property of our hills,

Save them from being looted.”

The Chipko Movement bears significance for several reasons, primarily because the seven-year-long battle forced Indira Gandhi, the then Prime Minister, to ban the felling of trees in India.

The Chipko Movement was a result of people’s collective initiative to protect the regional forests in Uttarakhand (then Uttar Pradesh). In April 1973, in the upper Alaknanda valley, the government had allotted a plot of land inside forest territory to a manufacturer of sports goods.

The movement was in response to the exploitation of natural resources by non-local forest contractors.

One of the warriors of this movement included Sunderlal Bahuguna. The Himalayan foothills were his home, his land, and he refused to watch it crumble into ruin. Hence he, along with his wife, Vimla, actively sought help from Dasoli Gram Swarajya Sangh (DGSS), a local NGO, and other activists like Ghanshyam Raturi, Chandi Prasad Bhatt, and Dhoom Singh Negi.

During the Chipko Movement, he walked the 4,870km trans-Himalayan journey to survey the destruction that was progressing at an alarming rate.

He walked from village to village to spread awareness and gather support for this fight against an economic development that was divorced from the ecology it was feeding on. He submitted reports to the UN to further expose the activities in the hope that more eyes would be diverted to the prevalent injustice to the people and its land.

Sunderlal seized every opportunity to act, and never ceased acting, but he knew that this was not a battle that could be won alone.

The Himalayan region of Uttar Pradesh (present day Uttarakhand) that he sought to protect was mostly dotted by small villages. He, therefore, used the strongest weapon that he could find for his cause – the very people of the region.

Through their Silyara Ashram, Sunderlal and Vimla sensitised villagers to the importance of the resources of their land and the threats of exploitation faced by them. They mobilised people against caste and gender discrimination, and deforestation.

The women of the village gathered under Chandi Prasad Bhatt’s guidance and with the help of DGSS, they formed a human chain and hugged the trees to protect their forest from deforestation.

The villagers drew inspiration from an 18th century protest, where a group of 363 people from 84 different villages risked their lives to protect a group of khejri trees that were to be cut down on the order of the Maharaja of Jodhpur. After this event, the maharaja decreed that the trees were to be left standing.

The original movement was called angalwaltha, the Garhwali word for "embrace”, as the protesters protected the trees by surrounding them and linking hands, physically preventing the loggers from touching the plants. The movement was later named with the Hindi word “chipko,” which means “to stick.”

Other than Sunderlal’s leadership, the factor that tipped the Chipko Movement towards victory was the support it gained from the locals. The impact of this was, in fact, much sweeter than victory because it incited the Appiko Movement in South India.

The success of this nonviolent, grassroots resistance was felt around the globe, serving as the inspiration for future environmental movements. The Chipko Andolan also stands out as an eco-feminist movement. Women formed the nucleus of the movement, as the group was most affected by the lack of firewood and drinking water caused by deforestation.

The movement is also credited for serving as an inspiration in bringing together the existing civil society to address the issues of tribals and marginalised people.

Further, by practising the methods of Satyagraha and non-violence, where both male and female activists from Uttarakhand played vital roles, the movement gained a mass appeal.

In 1987, the Chipko Movement was awarded the Right Livelihood Award.