This 25-year-old biker has undertaken a 2,300 km journey for the visually challenged 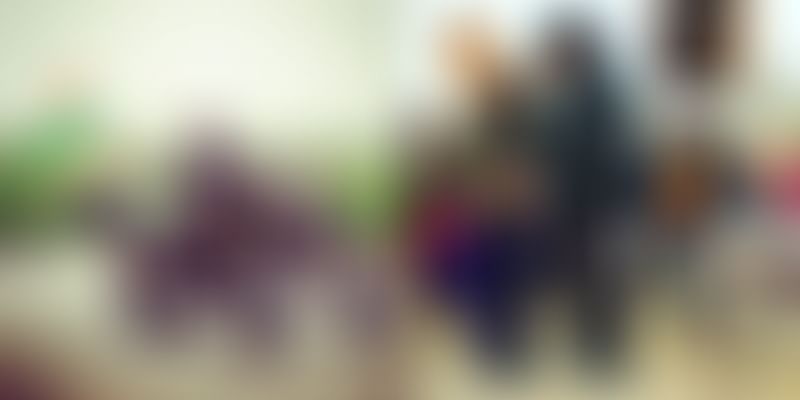 Solo biker Saif Ahmad Khan from Delhi is a man on a mission. Riding across Delhi to Bihar, sensitising people on disability, his ultimate goal is to undertake an all-India tour for the same cause.

Dreaming of an independent, more empowered life for People with Disabilities (PwDs) can be made possible if our society is more accepting and encouraging; accepting of the fact that PwDs, too, like you and I, can lead a normal life, and encouraging enough to pave a way for them to do so. Saif’s bike journey symbolises his effort to sensitise masses on the very same thought.

In 15 days, starting from January 21 this year, Saif traversed from Delhi, passing through Agra, Lucknow to Bihar, a total of 2,300 km on his tourer bike sensitising people on disability through his campaign ‘Ride for Netraheen’, literally translated to ‘ride for the blind’.

The 25-year-old, originally from Patna, is also the founder of Save The Quest, an NGO working towards the quality education and upliftment of specially-abled and underprivileged children in Delhi and Bihar.

Saif's history of helping those in need can be traced right to his school days, the impact of which has led him to where he is today. He shares, “I started working at orphanages during my school days. However, what changed my life was when I acted as a scribe for visually-impaired students.”

When he encountered that most of his differently-abled classmates found it difficult to find a scribe, Saif decided on creating a scribe bank, and set up Save The Quest, while in his second year of graduation in 2013. Ever since, along with empowering visually-impaired students by equipping them with computer skills and setting up a scribe bank that can be accessed by an app, the organisation also supports the educational needs of street children.

A journey of personal discovery

Speaking of what sparked the interest to carry out the Run for Netraheen campaign, Saif shares that he often found himself questioning the conditions of people with special abilities living in rural India. “I would always wonder if they were exercising their right to have proper access to education, to be empowered and be enabled. This thought of wanting a firsthand experience to personally discover and document the process of meeting PwDs in rural India led me to undertake this campaign,” he says.

After serving visually-impaired people in the past and learning that Bihar was home to over 23 million people with special abilities, out of which five million are visually impaired, Saif geared up for a sensitisation campaign by bringing his passion of bike-riding and profession of serving the blind together.

My mission was to cover 38 districts in Bihar, on my bike, while sensitising every individual I encountered on disability. My focus was also on giving a voice to people with special abilities, especially the visually impaired in Bihar.

Riding for a cause

Starting his sensitisation programme right from Delhi, Saif took off on January 21. “As part of a number of biker groups, a few of my biker friends came down and hosted a flag off for me before I began my journey. I used this as an opportunity to begin my education on disability right from home,” says Saif. Saif urged his friends to sign a pledge to work towards the empowerment of people with disability.

Saif's first stopover was at Sheroes, a cafe run by victims of acid attacks in Agra. “Meeting this group of enthusiastic women was a confidence booster. I spent time speaking with them and sensisiting them on disability. I also began shooting the first episode of my documentary here.” Moving on to Lucknow, Saif met Pallavi Fauzdar, a fierce biker known best for her high altitude riding and social work. She also supports his cause and helped sensitise individuals.

Heading straight to Patna thereafter, Saif interacted with people at the Ministry. “I gathered information on the places I needed to visit in Patna but was disappointed when I was told that the whole of Bihar had only three blind schools run by the government.”

The vast difference in number of blind people and the resources available for them compelled Saif to find two children whose education he could sponsor for a start. Visiting two blind schools in Patna, he found two blind children he invited to come study in Delhi.

In addition, throughout his journey, Saif distributed 100 white canes to over 600 blind kids across the nine commissionaires he visited in Bihar.

I managed to visit all the three blind schools, and a few other NGOs run for the blind. My purpose was to gain firsthand knowledge and experience staying with these people, a process of personal discovery but my mission was also to change perceptions.

Saif shares that in Bihar, it is not only the sighted who need sensitisation, but visually-impaired people too.

A lot of the visually-impaired people I met did not know what they were capable of, a lot of them did not know how to use a white cane. Across the nine commissionaires, people, including the visually impaired, believed that if you were born blind you have no life.

To change this notion, Saif carried out sensitization drives educating both the families and the visually impaired kids that the blind can study, work and lead an honourable life. He also conducted mobility drives, training students on how to use their white canes and distributed signature guides. “A signature guides allows the visually impaired to sign, this was a small step of empowerment to many.”

Managing to impact over 1,000 people single-handedly, Saif believes that it was the little change he could bring about that left a bigger impact on him.

The visually-impaired kids treated what I thought was just a white cane as an organ. Many came up to to me saying 'yeh chadi nahi meri aankhe hain (this isn't just a stick,it’s my eyes)’ This was victory in its purest form to me.

During his travels, Saif also made a list of the other troubles that these kids faced. Noticing that these schools and homes were suffering from absence of teachers and facilities like computers and other educational material, he launched a crowdfunding campaign to raise funds and meet these needs after his return in February. “I will be conducting a follow-up ride in March. With sufficient resources I will be able to distribute canes to many, sponsor salaries for a teachers and also buy a computer for the schools. I also wish to take a team of special trainers the next time I visit.”

Through his journey, Saif has helped many realise that PwDs are not different from any of us and that by working collectively we can not only bring them into the mainstream, but also create an accepting and barrier-free environment in the process. In the future, Saif wants to embark on an all-India ride, sensitising people and documenting his journey to help inspire.