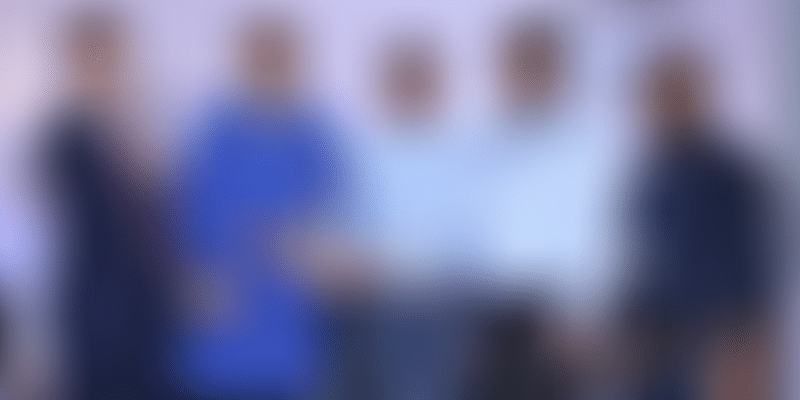 We’re told three-fourths of the Earth’s surface is made up of water. Yet, an acute water crisis has befallen us, with even large metropolitan cities from Cape Town to Sao Paulo having run dry for days together. Closer home, India is said to be facing its “worst water crisis in history”.

A June 2018 study by NITI Aayog found that nearly 600 million Indians are under “extreme water stress” and about 200,000 people die annually due to lack of access to clean potable water. NITI Aayog warns the crisis is only going to “get worse”, and 21 Indian cities are likely to run out of groundwater by 2020.

It is therefore imperative to not only conserve water but also process wastewater and make it fit for reuse. And, INDRA Water, a Mumbai-based water recycling startup, is doing just that.

INDRA has developed a portable electrocoagulation-based system to treat industrial effluent and wastewater from textiles, chemicals, and pharma industries, and sewage from residential, commercial, and municipal establishments. Electrocoagulation involves the passing of electricity through pollutants and contaminants to break down their chemical bonds. This technique is considered to be more effective than a simple chemical filtration.

Besides the hardware, INDRA has also developed a smart software system, which runs on machine learning algorithms and predicts how a water stream will behave when passed through the device. The entire water processing can be automated and/or remote-controlled through this system.

Since its commercial launch six months ago, INDRA has successfully treated more than five million litres of wastewater and says it is on course to treating nearly 3.5 million litres per day by the end of 2019. INDRA claims its systems can achieve up to 95 percent water recovery. Also, its spatial requirement is 40 percent lower, thus making it an attractive proposition for smart cities.

Amrit Om Nayak, Co-founder of INDRA Water, tells YourStory, “Our systems generate 85 percent less sludge than any other water plant. That is a direct reduction of area required for landfill. You are also bringing down the dependence on fresh water.”

In September, INDRA was recognised as the ‘Leading Startup - 2018’ at Digital Disrupt - The New Normal summit organised by the Bombay Management Association and the All India Management Association. It was also among the top 50 startups in IIGP 2.0 (India Innovation Growth Programme 2.0) jointly organised by Lockheed Martin, Tata Trust and the government’s Department of Science & Technology.

INDRA Water was formed in the middle of 2017 when two ex-batchmates, Amrit Om Nayak and Krunal Patel, from Seattle’s University of Washington, decided to give wings to the ideas and projects conceived during their Master’s programme. C0-founder Krunal tells us, “Our specialisation was energy and we were building a lot of sustainable development solutions. This was around 2015, and one of the projects we did was for the treatment of stormwater.”

He elaborates, “We developed a small model to treat stormwater and then made it reusable for landscaping and gardening. We realised that the tech could be applied to other forms of waste streams and effluent water too. Then we did another pilot at a boiler plant in the US. Our solution worked effectively on the boiler waste too. It convinced us that we had a real solution in hand.”

Buoyed by the success of its pilots, Krunal and Amrit went about creating a prototype for the treatment of wastewater and sewage. On their return to India in 2017, they tested the prototype at Mumbai’s KJ Somaiya College.

“We ran a six-month pilot. The Somaiya campus already had a conventional sewage system, but our system was one-seventh its size. We could process 25,000 litres of wastewater every day,” Krunal explains. “That’s when we decided to upgrade and make our solution commercially saleable,” he adds.

Thus, INDRA Water was founded. Amrit and Krunal were joined by Aditya Vemuganti (who also pursued a degree at the University of Washington), Abhijit VVR (BITS Pilani alumnus), and Sriteja Allaparthi (from IIIT Hyderabad) as co-founders.

In 2017 itself, INDRA Water earned a grant of Rs 10 lakh from IIT-B’s Department of Science of Technology. It was also the top biotech startup incubated at BioRiiDL, India’s first DIY Bio Lab and Bioincubator. The startup was even selected by the Research and Innovation Circle of Hyderabad (RICH) to work closely with the Government of Telangana and find solutions to emerging water problems.

“Palava is a wonderful test bed for us. It presents an interesting picture on what kind of water, what volumes, what ratios, etc. are required to pass through our systems. In construction sites of the Lodha Group (developer of Palava City), portable systems are required. Those are not available in the market currently. We’re helping them with that.”

Amrit reveals INDRA is working with Godavari Biorefineries, a chemical manufacturing company in Maharashtra, and is helping them reduce sludge and manage industrial effluents better.

The startup has also built a 10,000-litre wastewater treatment unit for a textile manufacturing company in Mumbai looking to reduce cost of raw water and discharge. INDRA’s systems not only helped the manufacturer bring down costs by 35-40 percent, but also reduce water usage.

The startup is now seeking more clients in the pharma and dairy industries. It has crossed Rs 1 crore in revenues and expects to reach Rs 6-7 crore in the next six months. Amrit says, “This is a capital-intensive industry. Revenues will flow. We hope to hit breakeven in another six installations.”

INDRA continues to be self-funded (besides the IIT-B grant), and while it has held conversations with a few investors, it is yet to raise capital. “Investors are very aggressive and want a lot of dilution. We were not ready earlier, but are looking at it now,” Amrit says.

The biggest challenge lies in the very nature of the water industry - which is haphazard and old-school. “This is a very chalta hai industry. Getting people to accept the technological change has been a problem,” Amrit says. He adds there are no organised players doing something similar, the market being very fragmented.

But, it is a vast ($200 billion) and largely under-penetrated sector. Only about 21 percent is being catered to, as per industry estimates. Therein lies the opportunity for INDRA. Amrit says, “There is scope for a 100 more of us in this industry. But our goal now is to treat 30 lakh litres of wastewater every day.”