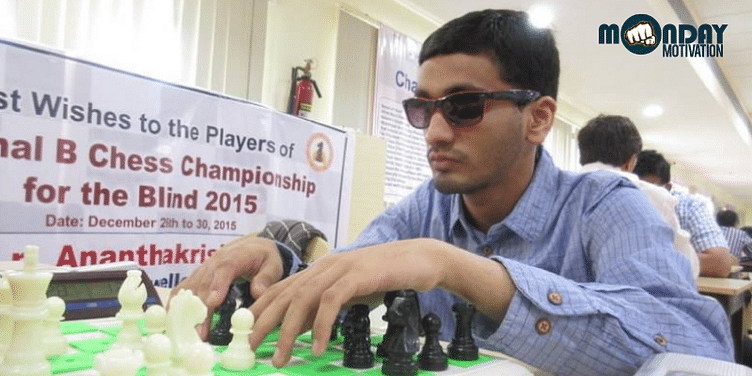 Darpan Inani is the highest rated blind chess player in India and the youngest to have ever won the National blind chess championships.

Darpan Inani sits facing his opponent with his customised wooden chess board in front of him, visualising the pawns and contemplating his next move. He then picks up a pawn and moves towards the King and excitedly calls out, “Checkmate!”

Twenty-four-year-old Darpan is the highest rated visually impaired chess player in India with an Elo rating of 2,053, and has represented the country four times in the World Blind Chess Championship.

“I started playing chess at the age of 13 and, since then, there has been no looking back. I was inclined towards the game mainly because it gave me an opportunity to play against a sighted person,” Darpan told YourStory.

Darpan’s love for chess is such that he is always ready for a game. His goal is to be the first visually impaired Indian to attain the title of ‘International Master’.

Vadodara-based Darpan was diagnosed with Stevens-Johnson syndrome, a severe skin reaction, when he was just three years old.

“I was born without any issues. The skin disorder erupted after a pediatrician gave me an injection for fever and conjunctivitis. I developed an allergy to something in the shot. Within a span of one week, I lost my eyesight completely,” he says.

Darpan and his family tried just about everything to get his sight fixed, but in vain. The only way out was to accept and cope with the situation. So Darpan ensured he performed well at school, where he rarely scored less than 85 percent. “The only aspect that used to bother me was the fact that I could not play any outdoor games, like my other classmates during PT class,” he recalls.

The turning point in Darpan’s life was when he visited a blind welfare association with his father. “My father spotted a chessboard at the association, and planted the idea of me learning the game. I was 13 years old then. My father helped me understand and grasp the rules as well as tactics involved in playing the game,” says Darpan.

After a few months, Darpan enrolled for a local chess tournament, where he met fellow participant Zahir Abbas Bhatkal, who recognised Darpan’s talent and encouraged him to take up professional coaching. Darpan later signed up with Shekar Sahu, an international chess master based in Mumbai for further training.

‘A game of vision, not visibility’

The only aspect that is different when it comes to Darpan’s game as compared to any other sighted chess player is the design of the chessboard and the pawns. Darpan uses either a wooden or acrylic chessboard with holes in the middle of every square and nails affixed to every Pawn. He gets to know whether the piece is King, Queen, Knight, Rook or Bishop based on the shape of the piece.

“Chess is a game that requires vision and not visibility. There is a thin line of difference between the two,” he notes.

As soon as the opponent announces his or her move, Darpan visualises his counter move.

“When I started playing chess, I used to think that sighted players have an edge in terms of the time they spend to make each move. However, once I began playing many games and practising my moves, I was able to make good time,” Darpan adds.

Darpan participated in various tournaments and has won many laurels. He competed against sighted players at State-level chess tournaments as part of the U13, U15 and U17 categories, and has represented Gujarat at the nationals. He became the youngest player to win the National Blind Chess Championship at the age of 16 in 2010.

He bagged the Bronze at the World Junior Blind Chess Championship (U20) at Serbia in 2013, the first ever individual medal to have been won by India in blind chess.

Darpan has represented the country four times in World Blind Chess Championships. He is also the only Indian visually impaired chess player to have ever won an international prize at the Creon Open chess tournament in France in 2018. Darpan was featured in Algorithms, an award-winning documentary directed by Ian McDonald, which details the little-known sporting field of blind chess in India.

Darpan’s friend and mentor Zahir says, “I am extremely proud of him. It is not easy to win tournament after tournament within such a short span of time.”

Darpan has not only outdone himself in the game of chess but also in academics. He is currently pursuing Chartered Accountancy and has already cleared the intermediate exam in his first attempt. He also loves playing harmonium and tabla in his spare time.

A source of inspiration

Darpan’s ‘never say die attitude’ is a big source of inspiration for many, especially for those who have lost their ability to see. Darpan has been assisting the ‘Project Checkmate’ initiative, which is working towards motivating visually impaired players to achieve greater heights in the game of chess.

“Chess has helped me in a lot of spheres. It has honed my cognitive abilities and decision making skills. I am sure the game will be a value-add to several other visually impaired people like me. I will continue doing my bit to encourage and motivate all of them to reach their full potential,” he signs off.