Started by ex-Zoho executives, Hippo Video aims to be a one-stop solution for your video needs 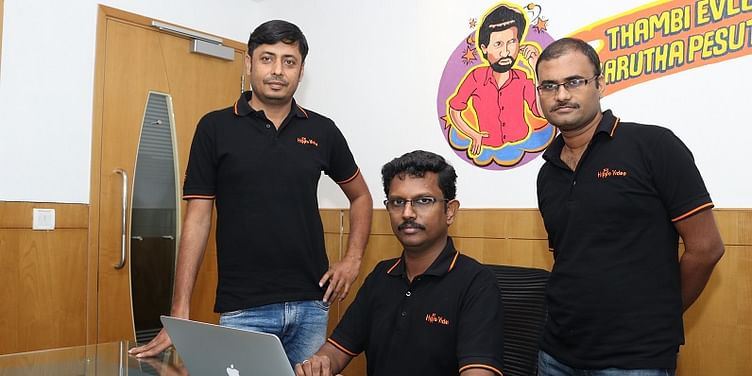 As internet penetration in India rises, people are increasingly engaging with videos. Companies across sectors accept the importance of videos to market their products, but are sceptical on how to deploy it. The reason is not the cost, but finding all features on a single platform.

Karthi Mariappan, Srinivasan Krishnan and Nilamchand Jain, all former Zoho employees, cashed in on this opportunity and started Hippo Video in 2016.

The founders started Hippo Video to capture the underserved video market with their B2B video marketing platform for businesses.

A product of Lyceum Technologies, Hippo Video is registered in the US and operates from Chennai. They offer videos to businesses at different stages of their journey. The platform can help businesses embed videos, create mass-in video personalisation, send bulk email campaigns, get detailed video performance reports, and on-board customers with one-to-one videos.

Hippo Video has so far catered to more than 500 companies across the globe including Freshworks, Lessonly, Tailwinds, Chargebee, Essilor and Goulet Pens.

From Zoho to Hippo

The founders say they thought of starting up as they wanted to bring about changes in Learning Management System (LMS) in the software world.

“Having been friends for 16 years, we know each other’s strengths and weaknesses, and most importantly, we have complimenting skills - marketing and product management, knowledge about technology and scaling. These are the important things you need to start up,” says Karthi.

“We had examples such as Freshworks and Zarget in front of us,” he says. The idea was also backed by Karthi and Nilamchand’s former boss at Zoho and Founder and CEO of Freshworks Girish Mathrubootham.

It is then that they aligned to create an LMS - Hippo Video. Initially, it was a simple video creation and editing tool. “It was an extension of what I was doing at Zoho,” says Karthi.

Forty-two-year-old Karthi says, before launching Hippo Video, he was a Product Strategist, Marketer and Product Manager at Zoho. During his tenure at Zoho, he had built products such as the Zoho Recruit, Zoho People, and Studio. Nilamchand (41), a technologist, built products like the Zoho Sheet from scratch. Srinivasan (41) is a data scientist and technologist.

Employees were initially hired from their circle of contacts and brought in experience from leading teams at Zoho, Freshworks and other startups. They tested the market with Google Chrome extension, and since their LMS platform had many modules, addressing support issues was proving to be a challenge. The team added the video element in their support as well.

“We would record issue-resolution videos and send it to customers. That was a game changer,” says Karthi.

From LMS to Hippo Video

The team says it dug deeper to understand the various aspects of video that can be played in the B2B segment.

“While there were multiple platforms to leverage the same kind of videos, the bigger issue was the user who was actually watching the videos in different distribution channels,” says Karthi.

According to the founders, “Using Hippo Video, businesses can capture the entire context of a user’s interaction with their videos throughout the buying journey.”

The platform also allows businesses to create narrative videos and customise the video player. “Businesses can optimise their videos for SEO by including subtitles to attract organic traffic,” Karthi says.

Besides this, the company helps send personalised email campaigns and add mail merge fields inside the videos to personalise at scale.

The company also lets businesses add lead generation and Customer Relationship Management (CRM) form to collect leads. Apart from this, customers can add polls, annotations and create playlists, as well as send a personal message to the lead and get real-time notification of its performance, thus allowing end-to-end tracking.

For businesses seeking premium services, the SaaS platform charges its clients a monthly subscription fee based on their video requirements, the highest being $199/month for marketing services of growth-stage businesses.

Businesses are given the option to sign up for services under categories such as marketing, sales, support or enterprises. Each of these categories is further divided into free, starter, pro and growth-stage services. For enterprises, the services are customised and depend on the services offered. According to Karthi, 60 percent of their current website traffic is direct.

“This traction has helped us double our revenue every quarter, and we are exceeding our own targets with a good margin. We recover our customer acquisition costs in six months of customer lifecycle,” the founders say.

Karthi adds: “Gaining traction in the video section is quite a challenge. We did have a well-experienced and agile tech team that was able to deliver the right tools and incorporate customer requests quickly.” This allowed them to gain nearly three lakh customers in close to 15 months.

According to Statista, the revenue from online video advertising segment globally amounts to $32,775 million in 2019.

According to the founders, what sets Hippo Video apart is that it gives businesses the complete context of their video assets. Another USP of the company is its mass email campaigns, which are effective outbound acquisition channels. The platform allows personalisation in email campaigns by extracting the values for the first name from the contact list and adding them to the video. As a result, Hippo Video’s clients receive a response rate of up to 65 percent, says one of the founders.

The company was one of the 16 startups selected from India at the TiE-Mumbai event, organised in association with Amazon Web Services.

“Hippo Video will bring video personalisation to every marketing channel in the future,” says Karthi. Their next plan is to enable businesses to engage their customers on websites, social media and chat platforms, using Hippo Video. “We will be the one-stop solution for everything video,” he adds.