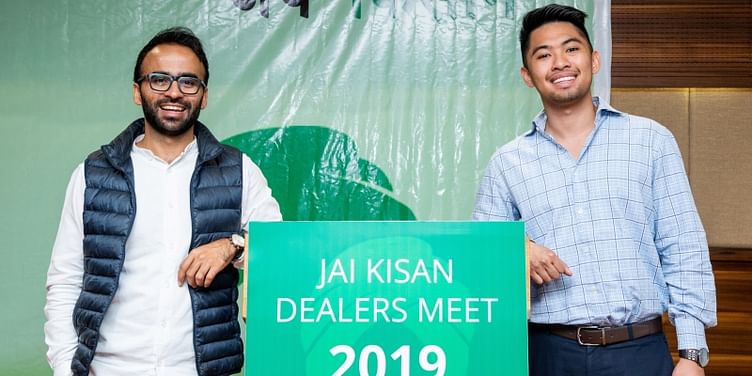 Mumbai-based Jai Kisan has raised $1.5 million, and will use the funds to increase its loan book size, expand operations across different states, partner with more lending institutions, and focus on customer acquisition.

The platform, which focuses on de-risking the flow of capital to farmers in emerging rural markets, will use this funding to extend the financing services to more farmers and increase the loan book size, expand its operations across different states, partner with more lending institutions, focus on customer acquisition, and increase its network of channel partners.

Speaking of the funding, Sajid Fazalbhoy, who led the deal for Blume Ventures, said in a press statement:

"Innovation in rural lending is the next frontier for financial services. Jai Kisan’s unique rural commerce model, coupled with their fintech platform focused on farmers, will become the platform of choice for all farmers' productive needs.”

Jai Kisan offers securitisation solutions and a tech-led value proposition for the sellers of products and services it finances. The team disburses loans at approximately 12 percent per annum within seven days, with minimal paperwork for the borrower while generating risk adjusted required rate of returns for the lender.

Arjun Ahluwalia, Founder and CEO, Jai Kisan says the team doesn’t think economic and social impact can be achieved by displacing traditional stakeholders. He adds they have gained local goodwill and strongholds, and are socially and economically influential in their local ecosystems.

“At Jai Kisan, we believe that intending to incentivise rather than disrupting is more effective. The platform provides a value proposition to each stakeholder by making their existing processes more efficient and leverages them to further create significant social and economic impact for the farmer and the rural community at large.”

The team has currently launched operations in Maharashtra and Karnataka with 25+ channel partner outlets. Its current financial products cater to financing income-generating equipment for the farmer community.

Sanjay Mariwala, MD of OmniActive Health Technologies, said in a press statement: “Jai Kisan’s unique model not only provides a value proposition to the farmer but also to other stakeholders in the value chain, including agri produce buyers who invest a large amount of their working capital facilities to finance farmers they procure from.”

Jai Kisan launched its operations in March last year. As of now, it claims to be present in over 25 channel partner locations across 12 districts in Maharashtra and Karnataka, and has on-board over 60 vendor partners selling more than 1,500 SKUs on the platform.

With 157.35 million hectares of agricultural land, India also has the second largest area of arable land in the world. It is this scalability factor that has led to such strong interest in agritech startups from venture capitalists (VCs) and private equity firms.

With a reported gross value added (GVA) of the agriculture and allied sectors at Rs 17.67 trillion ($274.23 billion) in FY 2018 and growing at a compound annual growth rate of 2.75 percent over FY2012-18, the sector has a strong opportunity to be disrupted through technology – something agritech startups have just started doing.