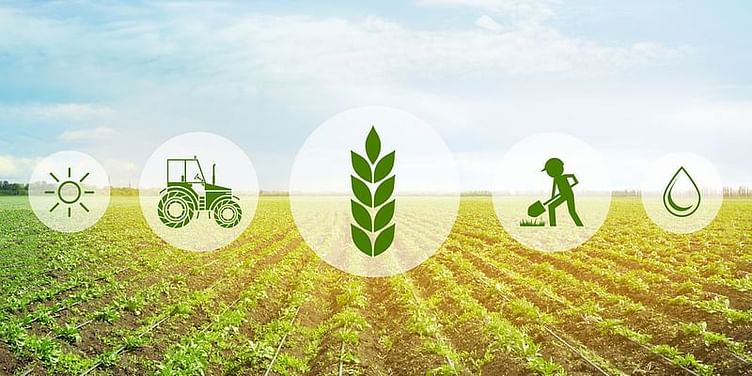 Gurugram-based agritech startup Bijak is transforming India’s agri trade with technology, information, and data. It has scaled up to 25 states in 18 months.

﻿Bijak﻿ started operations in April 2019, and has been a trailblazer in the agritech ecosystem. Its hyper growth prompted one of its investors to say, “Bijak has blown away everyone’s expectations about how fast an agritech startup can grow in India.”

We’ll get to the growth numbers in a bit. But first, the origins of the company.

Founded by Nukul Upadhye, Nikhil Tripathi, Mahesh Jakhotia, Daya Rai, and Jitender Bedwal — all of whom have prior experience in agritech — Bijak is a B2B marketplace for agricultural commodities that connects millions of buyers, sellers, traders, wholesalers, food processors, retailers, and farmers.

B2B traders control 75 percent of India’s agri value chain, but are plagued by limited access to technology, information, and credit.

This is what Bijak solves with its real-time trading platform that brings reliability and transparency, and enables frictionless transactions.

Nukul Upadhye, Co-founder of Bijak, tells YourStory, “We believe that market linkage is the most important piece in the agri value chain and has a direct and immediate impact on farmer incomes. We have just scratched the surface of the opportunity, and will continue to double down on our value proposition of bringing transparency and accountability in the sale of agri commodities.”

How Bijak is transforming agri trade

Besides helping multiple parties in the agri trade discover each other, the Gurugram-based agritech startup is also bringing in digitisation of physical mandis, artiyas (commission agents), dalaals (brokers), loaders, mills, and middlemen by providing them an online interface.

Farmers get access to mandi-wise lists of buyers and suppliers for each of their commodities (potato, onion, potato etc.) on the Bijak app.

The lists also include phone numbers of krishi vyapaaris (agri traders), real-time commodity rates, and a unique mandi ratings system (think Zomato for agri trading) based on their price and payment cycles, and historical reputation.

This lets farmers not only get more visibility on the sale of commodities, but also gain better prices (bhav) for their crops (fasal).

Meanwhile, buyers or sellers can use the Bijak app to create a sauda (order), maintain digital ledgers of transactions, track bakaya (pending amounts), get payment reminders, and manage mandi receipts, bijak (invoice) — where the startup derives its name from — and other documents. Think Khatabook for agri book-keeping.

The Bijak app is localised for those involved in the agri trade, with the use of terminologies widely used in mandis.

“Most agri transactions happen on credit. Sometimes the middlemen lack credit and are not able to acquire new buyers or bear the costs of logistics. So, they continue to do business in traditional channels without exploring synergies with new buyers.”

Essentially, the startup works on improving market linkages, bridging the information asymmetry in the agri trade, and fixing the lack of accountability.

Nukul says, “Our strength lies in being able to expand across commodities and geographies without necessarily deploying many people on the ground.”

Growth surged particularly after the lockdown. Due to inconsistencies and interruptions in the food chain, Bijak was approached by state governments, Farmer Producer Organisations (FPOs) and NGOs to “help farmers liquidate their commodities”.

“We didn’t have these kinds of customers before. Our customer base became more diverse post the lockdown,” Co-founder Mahesh Jakhotia reveals.

A diverse customer base led to other positives as well.

Mahesh elaborates, “We’re becoming a full-stack platform, and are well equipped in terms of product and technology to cater to the entire agri ecosystem. We’ve also been able to source good talent with deep expertise across functions. We got finance heads who built backends and payment architectures; some of our operations people are ex-entrepreneurs. All these things helped us scale much faster.”

Bijak is both Omidyar’s and Sequoia’s first agritech bet in India. The startup is also part of the latter’s Surge Accelerator Programme.

Mark Kahn, Managing Partner, Omnivore (among Bijak’s early backers), tells YourStory, “Bijak is building a solution for the agri commodity trade in India — a massive ecosystem ripe for digital transformation. What separates Bijak from others is their focus on traders, artiyas, and other mandi participants. Most agritech startups in India are focused on farmers, which is critically important, but the agri ecosystem has millions of middlemen who need to modernise their operations. They are not going to vanish anytime soon.”

Omnivore, with its strong networks in the agri ecosystem, is helping Bijak source quality agribusiness talent and drive adoption of its product.

Bijak is chasing a $200-billion market that involves over five million middlemen between farm-to-table. But, instead of trying to “reinvent the wheel” and replace existing systems, it is enabling them with tech, data, and information. That is what makes Bijak stand out among its peers and allows it to grow at breakneck speed.

“We always knew we didn’t want to create new infrastructure. Remote onboarding takes care of most customers. Each customer brings their current network of traders to the platform, who bring their network in turn. It’s a network effect that helped us grow exponentially.”

Bijak claims to have increased transactions, reduced sourcing costs, and optimised logistics for its customers. Additionally, it is changing habits too.

“Earlier, most middlemen in the agri trade didn’t use the internet because the impression was that it isn’t secure. We’ve been able to change that by giving them visibility across states and new target customers,” Nikhil adds.

Bijak takes a cut of every transaction it facilitates between buyers and sellers.

It also earns a lead generation commission from farm financiers (rural banks, NBFCs, fintechs, etc.) who get access to Bijak’s rich data pool of farmers and agri transactions. The platform takes a cut of every loan disbursed by farm lenders.

The recent Farm Bills have been a shot in the arm too.

“The Farm Bills are creating tailwinds for Bijak, which is translating into faster adoption by customers. It will go on to create large opportunities as middlemen have to digitise their operations to thrive in the new environment.”

The founders concur. “Earlier, pricing and access was controlled by only a few influential people in the trade. The Farm Bills are a great step by the government to bring democracy to the entire agri value chain,” they say.

Bijak, which started from a nondescript mandi in UP’s Kannauj district last year, only stands to gain and thrive in this new order.