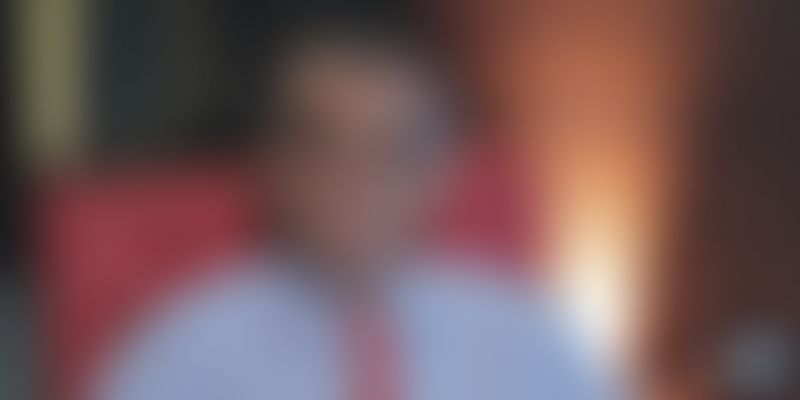 Rashesh Shah, Chairman, Edelweiss Group, quit his job in the mid-90s to start the home-grown professional financial services group. Today, it has over 11,000 employees and 2 million customers.

Rashesh Shah never wanted to become an entrepreneur. Born in a Gujarati business family, he was the first to study in an English-medium school. In fact, he pursued an MBA (Master of Business Administration) specifically so that he would not have to follow in his father and uncles’ footsteps and get into business.

“Ironically, I actually went to do an MBA in order not to be an entrepreneur. My whole ambition (was not to be in business), because I come from a business family, my father, my uncles, everyone, was always in business. So I always had this desire not to be in business, I wanted to be an officer in a company, working as an executive,” the IIM-Ahmedabad graduate tells YourStory Founder and CEO Shradha Sharma.

After graduating from the prestigious IIM, and post a brief stint at Prime Securities Ltd, the Edelweiss Group Chairman went on to join one of India’s largest lenders, ICICI Bank, where he had planned to “stay put.”

Rashesh was part of the export group at ICICI, where he dealt with new age companies that were competing in the global markets. It was here, while interacting with companies such as Infosys, who were his clients, that he got inspired to start up and cash in on the opportunities that India post its economic liberalisation was offering in the 90s.

“My idea was to stay put there (at ICICI) for as long as I can and continue to grow. But I think after 91-92, as India's economic liberalisation started happening... and also I was very fortunate that in ICICI I met with a lot of entrepreneurs. You saw that they were entrepreneurs of a different class and really competing in global markets and India was opening up and encouraging new entrepreneurs and there were foreign investors coming in.”

It’s not surprising that graduating from IIM in 1989, the thought of entrepreneurship was anything but attractive to Rashesh at the time. The Indian economy in the pre-liberalisation era was shrouded in bureaucratic red-tapism.

‘Licence Raj’ was the order of the day. It involved an elaborate system of licences and regulations that were mandatory to set up and run a business in the country. Setting up a business was nothing short of a nightmare before the then Finance Minister Dr Manmohan Singh (who later became Prime Minister) opened up the Indian economy by introducing the liberalisation policy in 1991.

“So I would say the 1991-96 period was a very fertile period for entrepreneurship and India's economy opening up and all, we all got caught into that. We were young, partly naive, partly the enthusiasm of all this new stuff is happening in capital markets, insurance banking is opening up, India's financial services [sic],” Rashesh reminisces how the entrepreneurial bug finally caught up with him as India was on the cusp of change.

Betting on a new India

Rashesh quit his job in 1995 and co-founded Edelweiss with his colleague at ICICI, Venkat Ramaswamy, the same year.

From Rs 20 lakh (around $27,000 at the current exchange rate) annual revenue in 1996 when it started operations, the financial services conglomerate -- which deals in credit, insurance, and wealth management -- has come up a long way to clocking a billion dollar in revenues.

Another major driving force behind Rashesh embarking on his entrepreneurial journey was the push from his wife, Vidya, also his batchmate at IIM-A. The 57-year-old entrepreneur fondly recounts, “She used to work in an investment bank and she encouraged me and said, ‘if you want to be an entrepreneur try it out, because ultimately being an MBA, you can always get a job again and there is no harm.’ And I think we said okay, I think it looks exciting, all our dreams are there. [sic]”

And thus, Rashesh and his colleague, Venkat, started out with just three people in a small (480-square-feet) office in downtown Mumbai’s Nariman Point. One of Edelweiss’ first clients was Rediff.com, whom it helped raise money. By 1998, Edelweiss managed to break even with a skeletal team of five. Today, the group has over 11,000 employees, and caters to 2 million customers. Rashesh has since moved to the ‘Edelweiss House’ office, an unmissable glass building in Mumbai’s Santa Cruz.

“We started off in a very small way, with just about a crore rupees of capital we put together. Our equity capital now is more than Rs 8,000 crore, but at that time even one crore looked like a big amount. Usually we always underestimate the upside that will happen over a longer period of time and in my wildest imagination I would not have even formed the hypothesis or assumed the growth that we've seen but also India has. [sic],” he highlights.

Rashesh believes in order to build a successful organisation, getting the right people on board and giving them a sense of ownership is critical.“Starting from very early on, one of the guiding principles we had was get good people in the company and get them as partners. One of the things we have done is we have actually one of the widest employee stock options. The employee stock option is not to give economic benefit only, but to really give that emotional feeling of ownership that we are all equal and we count,” he shares.

“I feel every year that whoever is adding value is a founder, there can't be any grandfather rights. So we started off as a new age company because fortunately we are not an old family business family which had anything to protect or any of the legacy systems and all that.” He says, as an organisation, Edelweiss evaluates itself constantly and has a meritocratic approach, which provides a level playing field to every employee to grow. The company does not believe in traditional ‘intellectual hierarchies’, only following a ‘functional hierarchy’ to avoid chaos, and even freshers are encouraged to air their views and ideas regularly, with the liberty to even argue with Rashesh himself.

Managing capital and talent efficiently, with some “luck” thrown in, has been instrumental in Edelweiss' growth and success; but the biggest tailwind for the organisation has come on the back of India’s economic growth over the past 25 years, admits Rashesh.

He explains, “We all have had the biggest tailwind that India has had, which is you know the last 25 years of growth. When we started 25 years ago, I could not have imagined, but if you just do the math, this was an inevitable kind of stage because India growing at that pace would have got us here in some form.[sic].”

At the time of liberalisation in 1991, India’s GDP (gross domestic product) stood at $266 billion, which has since grown over 10 times.  According to a report released this year by US-based think tank World Population Review, India emerged as the world's fifth-largest economy with a GDP of $2.94 trillion, overtaking the UK and France in 2019.

While there is no doubt about the fact that India’s economy has grown by leaps and bounds since liberalisation, today it finds itself in a rather uncomfortable position amid the COVID-19 crisis and perhaps the worst ever recession it has witnessed. The Indian economy officially entered recession when its GDP contracted 7.5 per cent year-on-year in the July- September quarter.

Rashesh says while there will always be uncertainties, whether it’s in the form of something like COVID-19, or US interest rates climbing, long term planning and policy stability can go a long way in reducing the unease for entrepreneurs.

“By doing all that, you reduce uncertainty for entrepreneurs, which then reflects in their ability to make long term investments...if you're going to change the GST (goods and services tax) rate every year, it's very hard for somebody to make a long term investment,” he shared.

Recently, Finance minister Nirmala Sitharaman hinted that the government may push the GST Council to limit changes in the rates to once a year, instead of allowing frequent tweaks. She said frequent changes upset revenue calculations.