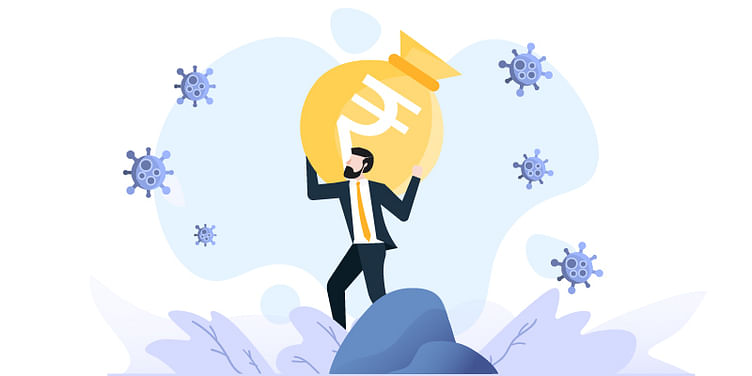 Buy Now Pay Later loans have seen immense growth amid the pandemic. Fast becoming a way for India to take small loans, the industry is expected to change how credit operates in the market.

The COVID-19 pandemic has immensely challenged the average consumer’s purchasing power, thanks to added healthcare expenses, as well as layoffs and salary cuts. At the same time, staying inside has led to an ecommerce boom with people looking for safer ways to shop — online.

To bridge the gap between one’s lower purchasing power and expenses, personal loans are usually the go-to for most people who can afford, and qualify, for a line of credit.

But if you need a line of credit to meet your daily expenses, as well as pay your utility bills, a personal loan could prove to be too large an amount, and also come with a whole host of additional fees and high interest rates.

Credit cards can solve this issue, but they have a very low approval rate in India. Not everyone qualifies for a credit card, and even if they do, not everyone applies for one.

Even if one does own a credit card, tracking payments, staying on top of hidden charges, etc, can be cumbersome.

This is where a more flexible solution has emerged in the last few years — buy now pay later or BNPL.

BNPLs are small-ticket loans that power online, as well as offline, purchases, mostly via apps that function much like a Paytm or a PhonePe when it comes to making instant payments. Several startups such as LazyPay, Simpl, ZestMoney, and ePayLater operating in this space have, essentially, changed the way credit works in India.

Fractional investing is opening up new investment opportunities for the common man. Here’s how

“A large number of people are accessing formal credit for the first time in their lives —  younger people, people in their first jobs, people working in the unorganised sector. They do not need heavy, burdensome products like personal loans or credit cards with high limits. They need bite-sized credit that they access alongside a purchase, which can enable them to afford things without incurring significant additional cost,” Lizzie Chapman, CEO and Co-founder, of ﻿ZestMoney﻿, tells YourStory.

“BNPL generally can serve more people because the ticket sizes are lower —  from Rs 200 to Rs 2 lakh —  and the costs to distribute and operate programmes are massively lower than traditional loan products,” she adds.

According to Bernstein, the pay-later market processes about $15 billion of payments volume currently —  and those numbers are set to rise exponentially as consumer credit becomes more integrated with digital payments processes.

A credit product for a finance-starved nation

In a country like India, where finance is quite fragmented, hard to access, and inundated with processes and paperwork, BNPL positions itself as a hassle-free, ready to use product — and it has been well-received especially in lower-tier cities and rural areas where formal financing is no better than a pipedream.

Signing up is easy, and doesn't require extensive paperwork. And as for the loan itself, it doesn’t come with a hefty price tag.

Simpl, for example, levies a charge of Rs 250 + GST as a late penalty if you miss a repayment, while most private banks impose a 26 to 30 percent, per annum, charge on the loan taken. At even 1 percent per month on a loan of Rs 1 lakh, for example, that comes up to Rs 1,000 —  which is four times what Simpl charges.

Credit via BNPL can start from as small as Rs 5 or Rs 10, depending on the service being used and the merchants it supports, and also be used to pay utility bills. Players in the BNPL ecosystem have made conscious efforts to make their platforms as easy to use as some of the popular payments apps that exist today so that there’s no friction when it comes to adopting a new system.

COVID-19 —  an inflexion point for ecommerce

Pure-play BNPL apps found a large user base in Tier II+ areas over the last year, thanks, in large part, to the COVID-19 pandemic, which changed the way consumers shopped.

Online shopping has seen a huge spike in the last 18 months, mostly from lower-tier cities as people took to the internet to order groceries, other essentials, clothes, utility items, and more.

On the flipside, layoffs, a tight employment market, salary cuts, and suspension of increments has added to people’s cost of living expenses —  forcing them to consider credit options to stave some of the financial pressure off.

All this has resulted in strong demand for credit and BNPL players have been able to capture a lot of that market. LazyPay, for example, saw a huge surge in its overall customer base during the pandemic, while ﻿Simpl﻿ witnessed a 40 percent increase in transactions for daily essentials from hyper-local merchants.

“​​For our BNPL offering, applications went up 2-3 times last year. The pandemic basically proved why an end-to-end 100 percent digital product makes perfect sense —  you don't want to interact with a finance agent at the store; you should be able to do it all yourself, on your phone,” Lizzie says.

“Also, people have realised it is great financial planning to spread out a purchase and pay for it later. Consumer awareness has been massive. More people talk about BNPL now. We have been doing this for five years, but never has there been so much interest from customers, merchants, lending partners, and investors in the space,” she adds.

Even among online payment players, BNPL is expected to hold nearly 9 percent of the market in 2024, up from 3 percent in 2020, according to a Goldman Sachs report.

Consumer banks that earn their main income from the interest they charge on loans have been a little wary of the BNPL space, especially since it essentially eats away at their main business. They also have a lot more regulatory oversight to deal with.

But slowly, they too are waking up to the fact that BNPL presents a far more lucrative opportunity than most of their credit products do —  at least as far as personal finance is concerned. Even though the ticket size for these loans is small, by achieving scale and adding more takers to the operation, BNPL loans can quickly create a thriving revenue stream.

HDFC’s Flexi Pay and ICICI’s PayLater are just some examples of services extended by traditional banks, especially to new-to-credit customers who have shied away from taking loans, either because of the extensive paperwork and costs associated, or because they did not have access to formal financing.

For pure-play pay-later companies such as Zest or Simpl, institutional banks entering the space don’t pose a threat at all. In fact, banks have approached startups and fintech players in the space to partner and extend credit lines through them.

“We offer BNPL via a co-lending model, wherein we partner with banks. We don’t view traditional banks as competition, but as partners. By co-opting with our partners, we believe in the potential of altering the lending landscape in India and making BNPL the country’s preferred credit option,” says Gaurav Hinduja, Co-founder of ﻿Capital Float﻿.

“It won’t be a fintech versus bank issue. The problem is so massive that partnerships are the only way we will move ahead. We have had a lot of banks reach out to know how we seamlessly continued collections and handled the moratorium last year. There is a lot of collaboration that we will continue to explore,” Zest’s Lizzie says.

Ecommerce platforms, where most of these loans are used, have launched their own BNPL plays. Amazon Pay and Flipkart Pay Later, in particular, have not only helped more people get access to micro-credits, but also helped them see a spike in their own sales as a result of the increased spending power BNPL begets their shoppers.

This is primarily because the way BNPL is marketed on ecommerce platforms —  right at the checkout point —  makes it feel less like an episodic consumer loan or a credit card purchase, and more like a digital payment method, which most Indians transacting online are already comfortable with.

How FamPay went from having to shut down operations during the pandemic, to growing its user base 10X in months

The future of BNPL in India

Because of the Indian mentality of “stretch your legs according to the coverlet”, loans and credit cards are often seen as a bad thing —  especially if it turns into runaway debt that is spent on ‘wanton’ purchases.

What makes pay-later more palatable is its small ticket size, its likeness to digital payments, and its cost-effectiveness. COVID-19 pushed a lot of the population that would’ve taken another two or three years to come online, into the digital age —  and, for most, their fintech journeys started from apps such as Paytm and PhonePe. BNPL players market themselves as just another digital payment platform —  and that strategy has worked.

“Given that it offers an unparalleled shopping experience to customers, we’re witnessing a large number of merchants and brands wanting to offer BNPL at their checkout, and it has proven to be beneficial to all parties involved — the customer, the merchant, and the BNPL provider,” Capital Float’s Gaurav says.

The next step to BNPL is offline payments, where companies such as PineLabs are innovating by offering credit on cards (both debit and credit) at physical checkout points.