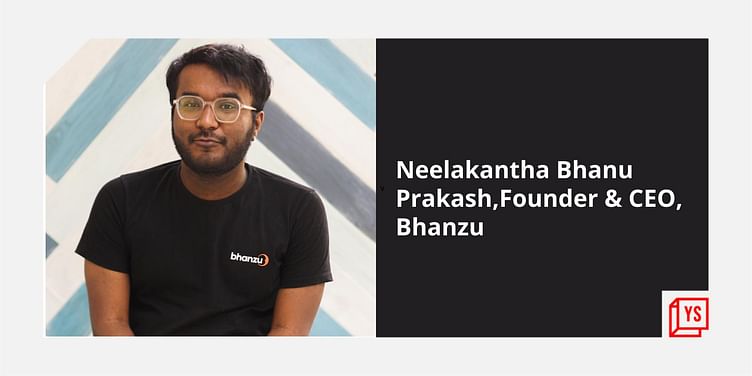 Mathematics, as has been for generations past, remains a daunting subject for many children. However, with technology and startups addressing this phobia, students have several resources to learn from. Hyderabad-based maths edtech startup ﻿Bhanzu﻿ is also one such platform.

Speaking about the platform, 22-year old Bhanu states, “Through Bhanzu, we aim to eradicate maths phobia and encourage careers in maths and STEM fields among learners from across the world.”

As a kid, Bhanu was always interested in mathematics. His parents also introduced him to maths puzzles at a tender age which gave Bhanu the opportunity to break out of the linear way of learning math.

He says it took a lot of deliberate and constant practice to become better and faster at maths.

“When I started off, I used to take part in Speed Maths contests and wasn’t even in the top 10. I had to reflect hard on my failures, hone my skills, and keep showing up everyday,” recalls Bhanu.

At the age of thirteen, he bagged the title of India’s fastest human calculator. Eventually, the same ethic of constant practice and constructive reflection helped him become the World’s Fastest Human Calculator at 15, breaking the world record of maths legends like Shakuntala Devi and Scott Flansburg.

The journey of becoming the world’s fastest human calculator opened up several opportunities for Bhanu.

He says he visited many countries and addressed students across the globe. That’s when he discovered that the fear of maths is actively prevalent in about three out of four children.

As an inspiration to many, Bhanu chose to step out of his comfort zone to build a cognitive curriculum that will make learning maths a more fun and relatable experience for the students.

While pursuing his Bachelor’s degree in mathematics from the St. Stephen’s College, Delhi, he performed in more than 500 stage shows and successfully conducted over 1,000 classes.

Bhanu has interacted and addressed the students of Commonwealth Nations and audiences across 23 nations.

Titled as the “Usain Bolt of Mathematics” by BBC News, Bhanu was invited multiple times by TEDx Talks to share his journey of exploring and learning maths.

In 2019, Bhanu formed a small team (the current co-founding team of Bhanzu) to experiment with his proprietary maths techniques among various government schools and NGOs. Together, the team started implementing these ideas across hundreds of public schools in an attempt to address this issue.

During this period, the team conducted assessments, revisited data points, and changed the learning trajectory of students.

These are some of my experiences that significantly helped Bhanu to conceptualise a commercial edtech entity.

The present-day curriculum on the platform is heavily shaped by these findings. Now, Bhanzu has developed experiential maths teaching based on stories and conceptual understanding that work for all students.

He was also the first Indian and Asian to win the gold medal in Mental Calculation World Championship 2020 at Mind Sports Olympics, London.

During the COVID-19 wave, Bhanu and his startup became the official maths partner of the government of Telangana (in 2020) and taught maths to students via recorded maths videos which was streamed on Telangana government’s TV channel (T-SAT).

“Our customised learning trajectories for students to explore the realms of coding, AI/ML, science and other social science fields are gaining popularity as parents are slowly moving towards outcome-oriented learning than eye candy courseware like coding classes which lack the rigor and depth,” states the founder.

Bhanzu provides online live classes where a teacher, who is personally trained by Bhanu, teaches students with fun story narratives and engaging activities. The curriculum is a sequence of concept modules.

Every module has specific tangible outcomes where a child progressively builds cognitive skills, excels academically, and more importantly, learns the relevant maths in STEM fields to scale the peaks of this happening world and be a future thought leader.

The startup says it caters to over 30,000 students and parents. It has served across the globe including India, and countries in the Middle East and South-East Asia. Bhanzu plans to expand in others countries this year.

The company is currently focused on building its tech platform and customer acquisition.

Currently organising classes through Zoom, the startup aims to implement its own proprietary app in the next few months.

Having customers from over 10 countries, the startup is ramping up its operations requirements to cater to customers across 50 countries.

“With an expanding presence in countries like India, the Middle East and South-East Asia. We wish to expand in other geographies in the run up to making Maths accessible to many people,” Bhanu says

There are steps in place to scale operations to serve the huge volume of students worldwide. To build this learning ecosystem, hiring extremely functional tech teams is our primary focus, and this is where a huge chunk of funds raised will be utilised,” he signs off.