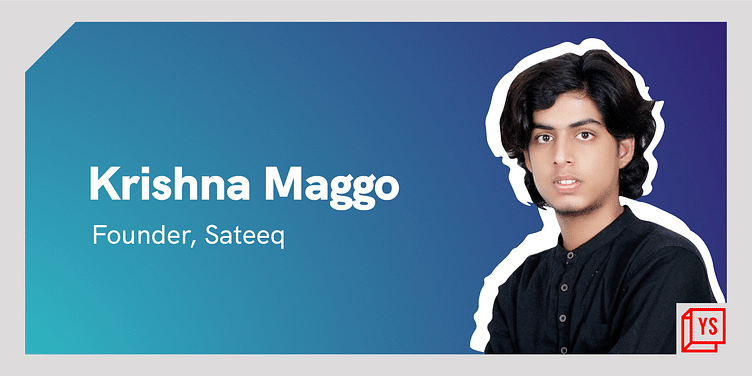 Krishna Maggo’s fundraising platform, Sateeq, enables anyone keen on riding the startup wave to be angel investors with investments as small as Rs 5,000

At first, Krishna Maggo might seem like your regular 16-year-old student. Except he’s a second-time entrepreneur currently running an online fundraising platform for startups that competes with the likes of AngelList, Venture Catalysts, and LetsVenture.

Krishna, a grade-12 student from Delhi, ran ﻿Sateeq﻿ in stealth mode for about six months before formally launching operations in April 2022. Within a month, he had onboarded 10 companies that had raised at least Pre-Series A or a Series A fundraising round.

Among them, three are already live and raising funds through the platform from a pool of 10,000 angel and marquee investors. About 50 more startups—including some backed by investors such as Mumbai Angels, Ivy Capital, and Deshpande Startups—are on the waitlist.

“Sateeq solves a real problem for both the demand and supply side through technology,” says Amitesh, also a Partner at SIMA Funds. “On the demand side, fewer than 0.1 percent retail investors are able to invest in alternative assets such as startups. On the supply side, fewer than 5 percent of startups are able to raise funds from investors. Sateeq solves for this unmet demand using technology to match these stakeholders.”

Krishna’s entrepreneurial journey took roots when he came across books on business and entrepreneurship as a sixth-grader.

“Some of the earliest books I read were Rich Dad, Poor Dad, and Think and Grow Rich. More than reading books, I used to watch a lot of YouTube videos on business case studies and stories of international and national business leaders such as McDonald's, Sachin Bansal, and Ritesh Agarwal. They made me want to explore entrepreneurship someday, and honestly, I wanted to become rich and powerful,” recalls Krishna.

“But now I have a new calling: I want to build something.”

In 2021, when his 10th board exams got cancelled during the second wave of the COVID-19 pandemic, Krishna decided to use his free time to build his first company, GrowwVenture, an angel investing platform.

From April to August 2021, he tirelessly reached out to angel investors through email and LinkedIn. He managed to onboard 200 angel investors but found it difficult to build investors’ confidence in the platform. He also realised that the existing pool of angel investors did not need another platform to invest in companies. After operating GrowwVenture for about five months, Krishna decided to shut shop.

He, however, turned his attention to retail investors who might not have the required capital to join traditional platforms as angel investors.

“Angel investing is accessible to a higher class of society,” Krishna tells YourStory. “Traditional investing platforms require investors to invest a minimum of Rs 2-3 lakh, and require startups to have an annual turnover of around Rs 2 crore before raising any funds from marquee investors.”

Krishna began building Sateeq, allowing ordinary folks to become angel investors by pumping in as little as Rs 5,000 in startups.

“Krishna might be a 16-year-old, but his determination, knowledge, capability to drive a business, and his thought process as an entrepreneur are much better than many 30-year-old entrepreneurs,” says Himanshu, Co-founder of Unlu, a celebrity-to-fan connect platform.

Sateeq follows an invite-only model for onboarding startups. Krishna’s team of 10 follows a three-step process to verify startups before registering them. This includes scouting and vetting a startup by investors associated with Sateeq, followed by an analysis of investment opportunities. The final stage involves roping in an external agency for a due diligence report on the startup.

Startups on the platform connect with investors to raise community funding based on Compulsory Convertible Debentures (CCDs) and Community Stock Option Pools (CSOPs)—two tools startups commonly use to raise capital.

CCDs can be converted into equity after a specific time. Since its convertibility is a perceived advantage and relies on trigger events such as initial public offerings, mergers, buy-backs, or secondary buyouts by new investors, investors are willing to accept a lower interest rate for purchasing convertible debentures. Currently, two companies on Sateeq are raising funds through CCDs.

One of the demerits of CCDs is that as per regulations set by the Ministry of Corporate Affairs, companies cannot raise funds from more than 200 investors using this tool.

This is where CSOPs come into play as an alternative. Similar to the Employee Stock Ownership Plans (ESOPs), Sateeq allows early-stage startups to introduce CSOPs to allot stock options to retail investors in exchange for a subscription amount or investment money. This way, companies can raise funds from as many investors as available, as there is no cap on the number of investors who can participate. Currently, one startup on Sateeq is using CSOPs to raise capital.

Sateeq operates as per guidelines prescribed by the Companies Act, 2013. Unlike traditional angel networks, the platform doesn’t facilitate investments using SEBI's Alternative Investment Fund Structure, and, hence, does not come under the capital market regulator’s purview.

For every fund raised, Sateeq receives a transaction fee from investors amounting to 2 percent of the invested money. Startups pay 2-5 percent of the funds raised. Additionally, investors need to pay an exit fee of 2 percent.

The platform also facilitates private funding deals and campaigns with a select set of investors. The platform doesn’t charge any equity.

Currently, Sateeq is at its pre-revenue stage.

Challenges of a teen entrepreneur

Krishna Maggo’s journey as an entrepreneur conjures up a resemblance to another precocious former teen who’s now among the country’s most wealthy—Ritesh Agarwal, who dropped out of college to start Oravel Stays, now OYO Rooms.

For Krishna, his biggest support has been his parents. However, even they were hesitant in the initial days.

“Coming from a middle-class background, my relatives and parents wanted me to find a job. Some suggested my parents to not let me venture into the business world until I complete my graduation,” recalls Krishna.

The hesitancy also stems from Krishna’s father, who had tried his hand at business and started a restaurant but failed.

“My dad’s failure in business is one of the reasons why my parents were not confident with me exploring entrepreneurship. They had witnessed a massive loss of investment. But once they saw Sateeq attracting the attention of some really big names, they realised I was doing something right,” Krishna adds, squeezing in time to speak with YourStory after returning from school.

“It is very disheartening to see that our traditional education system does not promote entrepreneurship at any stage,” says Krishna. “Although I am making headlines as a young entrepreneur, there appears to be very little support from my school in terms of helping me manage my studies and my venture.”

When schools went online during the pandemic, he was able to give equal attention to studies and Sateeq. With schools reopening now, he often has to compromise on his attendance and curriculum.

Krishna’s focus, for now, is to close as many deals as possible and grow Sateeq’s network of investors to 100,000.

He’s already peering beyond, to tap into the vast potential of a rapidly evolving online universe. Krishna plans to explore opportunities in Web3 and introduce asset-backed tokens in investments. That, he says, is key to allowing investors to have fractional investments in startups through asset tokenisation.

(The article has been updated with new infographics).