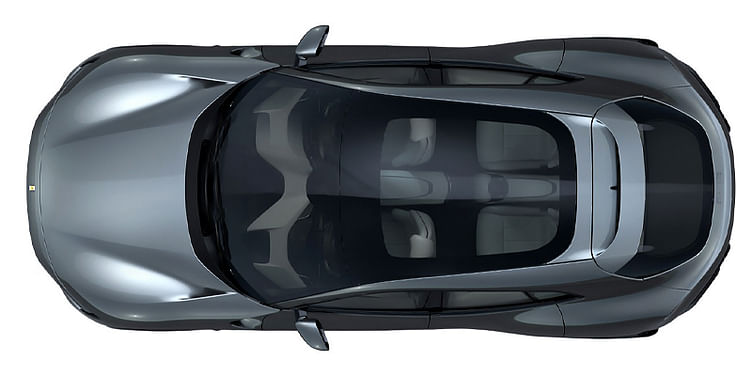 Powered by a naturally aspirated 6.5-litre V12, Ferrari Purosangue is the fastest production-spec SUV/crossover; it is expected to hit Indian roads by late 2023

After multiple teasers and online campaigns, Ferrari has finally unleashed its first crossover to the world. The Purosangue (Italian for thoroughbred), is its first ever 'four-door, four-seat model' from the Maranello-based sports car brand.

Expected to go on sale in early 2023 in major international markets, the crossover is likely to make its debut in India later next year. Interestingly, Ferrari refrains from labelling the Purosangue as an ‘SUV’ and there’s good reason for it. In fact, it can be best described as a sports car on stilettos thanks to a traditional low-slung stance.

The exterior design of Purosangue draws inspiration from other Ferrari models like SF90 Stradale, GTC4 Lusso and the recently launched 296 GTB. A low carbon fibre roofline, a long clamshell bonnet and a tight-fitting tail not only lend the car an eye-catching silhouette but also give it a unique aerodynamic shape.

Like all other Ferraris, it cleverly hides aerodynamic aids on its exteriors thanks to the claddings on door sills and wheel arches, in process also adding visual mass to the overall appearance. The larger concealed elements have been designed in a way to minimise drag and optimise airflow and define Purosangue’s styling.

For instance, it features an F12 Berlinetta-inspired aerobridge with air inlets integrated into the headlight unit while outlets are positioned on the fenders. The in-vogue split headlamp setup comprises LED DRLs placed above and below air vents and the main headlamp cluster positioned lower down in the bumper in the midst of larger ducts.

To further aid the aerodynamic efficiency, the Purosangue gets a roof-mounted spoiler and a rear diffuser. Adding flair to the overall design are suicide-style doors inspired by Rolls Royce models. The massive wheel arches are filled by 22-inch alloy wheels up front and 23-inch units at the rear. Yellow-coloured brake callipers also add heft to the car’s aesthetics.

Moving towards the rear, Purosangue gets split wraparound LED taillights and a notchback tailgate. The rear bumper houses a diffuser that is made of a gloss black plastic trim. Exhaust gases are let out through a quad canister setup that produces a sporty symphony.

Inside the cabin, Ferrari adopts minimalist styling with a dual-cockpit theme. The larger driver’s display is complemented by a slightly smaller 10.25-inch infotainment screen on the passenger side. A similar dual-screen layout has been carried over to the rear-seat passengers with two individual adjustable passenger seats.

Purosangue is equipped with plenty of features including individual climate control settings for each occupant, wireless smartphone charging, a multifunction steering wheel and Android Auto and Apple CarPlay connectivity. However, it misses out on satellite navigation. It also boasts of 373-litre boot space.

The front mid-engine layout provides the car with an even 49:51 weight distribution, making it stand out from rest of the performance SUVs. Power is sent to all four wheels but in a unique manner. The front axles receive their share of power through a two-speed transmission while the rear axle is sent power via an eight-speed DCT automatic gearbox.

The rear-biased all-wheel drive setup enables the engine to efficiently distribute power, thus, offering excellent grip. The revised DCT gearbox with shorter gear ratios offers a sharper response. Purosangue is able to breach the 100 kmph from a standstill in just 3.3 seconds. Acceleration time for 0-200 kmph is rated at 10.6 seconds. The crossover can clock a top speed of 310 kmph.

Ferrari Purosangue is underpinned by a new aluminium chassis that sits on an active suspension co-developed by Multimatic. The active suspension setup features passive dampers with Multimatic’s True Active Spool Valve which is the first time in any Ferrari. Despite tipping the scales at 2,033kg (dry), making it the heaviest Ferrari of all time, the independent rear-wheel steering adds agility to the overall dynamics.

Stopping power is achieved from standard fit carbon ceramic disc brakes on all four wheels. Ground clearance for Purosangue is measured at 180mm with the option of lifting it by an additional 30mm, albeit for low-speed use only.

Deliveries for Purosangue are expected to commence from the second quarter of 2023 for European markets. In order to keep its clientele exclusive, Ferrari has said that production for Purosangue will not exceed 20% of the total production which means one can expect extremely long waiting periods for this upcoming crossover.