How a snack-making unit in a remote village in Maharashtra is empowering women, one khakhra at a time 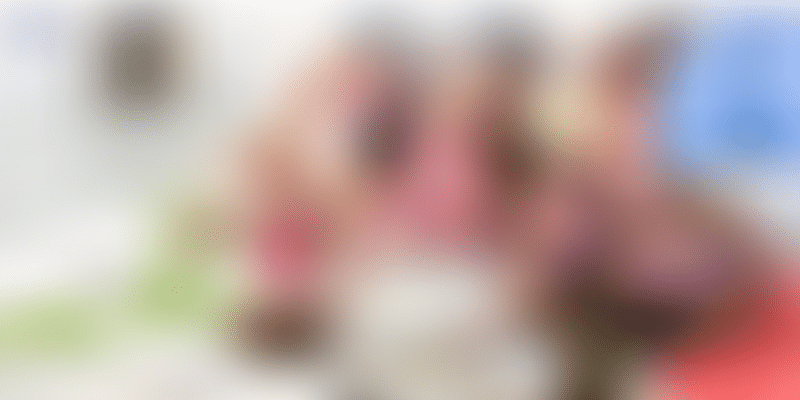 Chaakri is a fully volunteer-run organisation launched in 2005 to promote employment and support to women in the rural district of Raigad. It trains women to make khakhras at its unit at Pali village and is also helping them make better life choices.

Devi Gupta is a 33-year-old woman from Parli village, Sudhagad Taluka in Raigad district of Maharashtra. She was married at the age of 15, had her first child at 17, and a second soon after. She had no money to educate her children as her husband was always unemployed. He was also a compulsive alcoholic and getting beaten up was routine for Devi. There were times when she used to go hungry for days. Her life had turned into a nightmare.

Six months after her husband’s death, her neighbour introduced her to Chaakri, a khakhra (a savoury snack) making unit in her village. And Devi’s life changed forever.

“Chaakri made a huge impact on my life. I received support in every way – morally, financially and even emotionally. I had someone to hear me out, and to share my problems with. I could earn my livelihood, and ensure that both of my sons could get an education. My elder son has passed Class 12 and is now getting vocational training. I am now a trainer; I recruit new people and train them in rolling khakhras. Earlier, I couldn’t even think of buying a sari worth Rs 100. I have come a long way,” Devi says.

Devi is one among the 100 women who have been impacted by Chaakri, a fully volunteer-run organisation launched in 2005 to promote employment and support to women in the rural district of Raigad. All the women come from marginalised backgrounds.

Chaakri was founded by a group of trustees from Shramik Naari Sangh (Sa-Ni-Sa), a charitable society, aimed at providing employment opportunities to underprivileged women.

Shruti Sheth heads the Chaakri unit at Rajnagar village, Pali. A post-graduate from NMIMS University with a degree in human resource management, she worked with the Business Research arm of JP Morgan Chase India for almost nine years. She quit her job as Associate Vice President at the peak of her career to put her management experience and professional expertise at work for Sa-Ni-Sa.

Working at the grass-roots level, Shruti not only provides marginalised women with employment but also goes door-to-door in villages to campaign against domestic violence that is rampant in the region.

All women are welcome to join Chaakri; the only criteria is that they have to be 18-years-old or above and are willing to learn. Training and skill development is provided to women on all aspects like personal hygiene, dough making, rolling, roasting, weighing, vacuum packing, compiling orders received, dispatch as per orders, inventory management, and billing.

“We have employed some differently-abled women as well, with the idea to encourage and facilitate them to live a life of dignity. Depending on their physical constraints, we create special work profiles/roles for them,” she adds.

The women work in Chaakri’s Mahila Gruh Udyog. On an average, each woman earns about Rs 6,000 per month. However, their earnings depend on how many kilogrammes of khakhra they can roll/roast/pack per day.

“By incentivising the pay in line with productivity and efficiency, they have the motivation to put in hard work and directly benefit from it. This way, they are assuring a fair chance of earning more regardless of whether they’re new recruits or tenured staff. These wages are at par with those being paid by other employers or small scale units in the vicinity,” Shruti says.

The khakhras are then sold across several cities in India through volunteers in Mumbai, Pune, Bengaluru, Delhi, Kolkata, Chennai, Hyderabad, Jamshedpur, Jabalpur, Nagpur, Ahmedabad, Surat, Daman, and other cities. Chaakri has also expanded its reach through BigBasket online in Mumbai and Pune. In addition to local sales, Chaakri khakhra is now being exported to the US, Canada, Singapore, Mauritius, and Dubai.

Also read: From a small village in Tamil Nadu to the US: how a pottery-making group of women became global sellers

Besides giving the women a livelihood, Chaakri ensures overall development through various initiatives that include:

Twenty-four-year-old Dhanashree Dalvi dropped out of college after class 12 since girls from her community weren’t “allowed” to study further. Due to lack of opportunities in her village and restrictions imposed by her community, she had no choice but to join a construction site. She worked for few months as a labourer, despite being a bright student. Malnutrition and hard labour affected her health and she was fired from the construction site.

She joined Chaakri in 2014 and learnt billing and data entry. Over the years, she has grown to the level of a supervisor and manages compensation, MIS reports, and admin work. She took up the responsibility of running the household, after the demise of her father as her mother succumbed to clinical depression. Dhanashree ensured that her siblings complete their education, and is currently pursuing her own studies through correspondence.

She says, “I am what Chaakri has made me over the years. I wouldn’t have been able to survive had it not been for the support, love, and encouragement that I received from Chaakri.”

Women who were marginalised, introverted, and did not have a voice are today making their own choices; are self-reliant; work with dignity; aspire to lead better lives; and dream big for their children.

“Chaakri started with just two women in 2005 and has grown today to over 90 women who are self-reliant and work with dignity in a safe, secure, and positive work environment. We are looking to support a greater number of women with this successful model, but don't have the infrastructure and space to do so. We are raising funds for a new factory,” Shruti says.

When you empower a woman, you empower the family, the village, the city, the country and the whole world. The women at Chaakri are all set to change the world, one khakhra at a time.

Also read: This Gurugram-based startup is helping women in villages across Himachal knit a brighter future