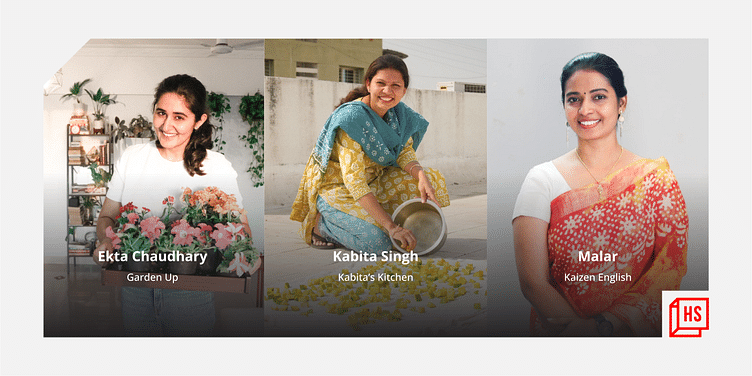 HerStory speaks to three women who took to digital media to convert their passions into a viable income. YouTube channel creators Kabita’s Kitchen, Kaizen English, and GardenUp have their own inspiring stories to tell – from their first hesitant shoot to being followed by millions of subscribers.

Around 500 kms south of Chennai, in the textile hub of Rajapalayam, 18-year-old Malar’s family had run into grave financial troubles. To reduce the “burden”, Malar was forced to discontinue her studies after Class 12 and get married. Her low-income family did not have a choice, she says, but Malar put forth one condition to her prospective groom: she had to work after marriage to support her parents and young sisters.

Twenty-two years since then, she’s gained a BA degree through correspondence, worked as a kindergarten teacher, started private tutoring for children, got cheated in a business venture, worked hard to speak English fluently, and learned to impart those lessons confidently through YouTube lessons - to over a million subscribers.

Today, besides having her own YouTube channel, Kaizen English, Malar runs two thriving Spoken English centres – one each in Chennai and Rajapalayam.

During a friendly chat with HerStory, she proudly reveals how she was able to open her own centre in Chennai, and buy an apartment for herself from ad revenues from her channel alone.

“I studied in a state board school. Later, when I started teaching, I had an Anglo-Indian colleague who spoke excellent English and I was very inspired by her. She used to correct my pronunciation and was very helpful. Over time I joined a spoken English centre where students loved the way I taught. I was so popular that I was asked to become a business partner there, but I got cheated in the venture. I left that job, but the students refused to leave me, and made me start my own institute – from my small home in Rajapalayam!”

“I started uploading lessons on YouTube in 2017, 10 years after I started my own centre. Now I run classes online and operate two of my own centres. People keep asking me when I will open centres in Bengaluru and other metros,” she says.

Digital media has helped many women like Malar come into their own, and how!

Long before the internet became a way of life, women who were bound by domestic responsibilities and forced to give up on their dreams of working full time had fewer options when it came to earning a viable living.

Some took to home-based tutoring, and some others sold LIC policies, or became Amway distributors. But then again, these did not guarantee a fixed income. And for many of the homemakers who were conscious about labelling, more than earning, it was societal perception.

Take food blogger and YouTuber Kabita Singh for instance, who readily agrees that the lure of being referred to as a content creator or YouTuber was much more interesting to her than being known as a housewife.

“Whenever I met my peers or others in my society, most of the women were working in IT and I felt left out. I didn’t want to be seen as just a housewife, although I know that is the toughest job,” Pune-based Kabita tells HerStory.

Kabita’s refreshing spontaneity and simple and easy cooking videos have garnered her over 12 million subscribers on YouTube. Quite a mean feat, especially as when she was first exposed to a video shoot in 2014, it was because she was pulled in to help an artist blogger friend create her content.

“She offered me Rs 5,000 to help her edit her video, and I thought I could earn and learn at the same time! I watched a lot of YouTube videos on how to create content online, told my husband that I wanted to do this, and started to shoot my cooking video. It took me about 10-15 days, but I finally made a basic video of aloo-bhindi sabji and posted it on Facebook without telling anyone. My friends and family started calling me and asked how I could start with such a basic recipe,” Kabita says.

Her channel, Kabita’s Kitchen, turned popular overnight when she posted the recipe for bread gulab jamun. To date, the video has 25,277,609 views and counting, and Kabita attributes this to the easy and quick nature of the recipe. A user’s comment reads, ‘My 9-year-old made it by herself. Lovely recipe. It turned out delicious. Thank you.”

“This kind of feedback and constant interaction with viewers gives me great satisfaction and inner peace,” says Kabita. But is it only adulations all the time? What about the trolling?

“That can be demotivating. Someone used an abusive word once, and I felt quite bad about it. But my husband Manish taught me not to run away from confronting these comments, and to clarify if there were any misses on my part.

"I once made my mother’s version of fish curry that we used to have as kids in Kolkata, and titled it Bengali Fish Curry. Only to receive plenty of negative remarks that it was nothing like a Bengali Fish Curry. I then went back to the comments, addressed them, and told them that the error was on my end because I had titled it wrong. After that, the audience started appreciating my honesty,” Kabita explains.

Apart from helping women gain control over work-life balance, what digital media has done is helped them discover strengths and skills they never imagined they had. Like entrepreneurship, for instance.

Mumbai-based Ekta Chaudhary is the face behind Garden Up, a YouTube channel dedicated to gardening. While doing her PhD in ecology at the Indian Institute of Science in Bangalore, Ekta started collecting plant cuttings and growing them in her tiny hostel room.

“For my research on elephants and large herbivores, I had to spend a considerable amount of time in the Mudumalai forests. But since PhD also required a lot of data analysis, I found it boring. I loved being in the wild, and I missed my time in the forests whenever I came back to Bangalore. To cope with that, I started collecting plants,” Ekta says.

That little hobby grew into a full-fledged YouTube channel even before Ekta completed her research degree.

“I started the Garden Up channel in 2017, and by 2019 I had a fair bit of idea about gardening as a niche. I knew I had started connecting with people through my channel and I had my set audience, so the same year, as an extension of the YouTube channel, I launched the Garden Up online retail store. It’s essentially a store that sells gardening products like ceramic pots or fertilisers from different vendors, but I only sell what I believe in and endorse.”

In 2020, when COVID-19 hit and employees took to remote working, many HR teams took to corporate workshops to bolster employee motivation. Since Ekta’s audience constituted a sizeable corporate clientele, she started another vertical – edutainment – with digital workshops on gardening.

It’s often said the best-laid plans go awry. Kabita, Malar, and Ekta have shown that even when those dreams fail, it’s possible to beat the odds. All one needs is some spunk and good faith.