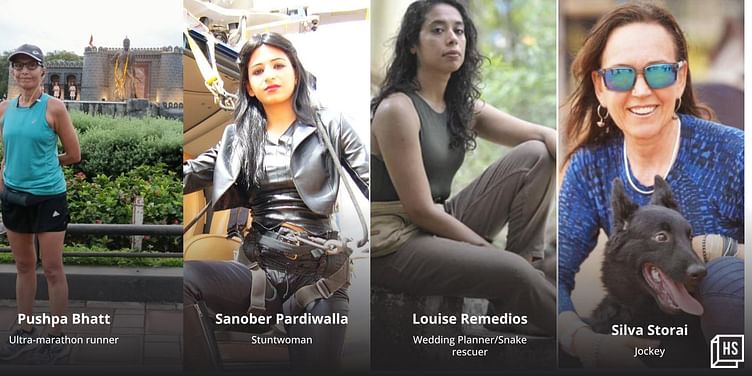 HerStory presents five women who are making a mark with extraordinary achievements in various fields.

Women continue to prove there are no limits, except the ones we place on ourselves.

They are breaking barriers while also breaking stereotypes in the process. They have gone where ‘no woman has gone before’, braving challenges, and becoming pioneers in different domains.

What’s common among them is their indomitable grit, hard work, and persistence.

Here is a list of women who have gone off the beaten track and excelled in fields, defying age, societal barriers, and hurdles in their path.

Popularly known as Bollywood’s first stuntwoman, Sanober Pardiwalla started her career at a very young age by performing as a double for Aishwarya Rai in a Nakshatra Diamonds advertisement.

By the time Sanober finished school, she had already worked as a stunt double in 40 movies. From jumping off the 16th floor of a building when she was 15 for Bhoot, being part of a big bomb blast sequence for Hero: The Love Story of a Spy, falling off a cliff for Raavan, and a recent underwater sequence for Shamshera, Sanober has done it all.

Till a few years ago, Sanober was quite used to hearing, ‘stuntman ko bulao’ (call the stuntman), only for her to correct them, ‘you can call me stuntwoman!’ The acceptance and understanding have taken a while to come and she’s happy about it.

When Louise Remedios was working in a five-star hotel in Goa, she attended a presentation by Benhail Antao, a wildlife conservationist, well-known for rescuing snakes and other animals, and working closely with the forest department for wildlife preservation and conservation.

Little did she know, she would marry him and become one half of the Ben-Louise duo, rescuing snakes and other animals and being featured in Snakes SOS: Goa’s Wildest on National Geographic.

While the job is one fraught with many risks and dangers, Louise has also been bitten by non-venomous snakes many times. But she says the past 10 years of working with Ben have been full of “memorable experiences”.

At 66, Pushpa Bhatt completed the world’s highest ultramarathon, the Khardung La Challenge, across a 72-km stretch, 17,852 feet above sea level, on September 9 this year. Three years ago, she missed the cut-off by four minutes, even though she had finished the first three stretches well in time. A miscalculation in the countdown mainly led to her losing out in the final stretch.

After two decades of working in corporate organisations, Pushpa became an entrepreneur and invested in a franchise of a L’Oreal salon. During the pandemic, she did a course at the American College of Sports Nutrition to become a qualified nutritionist at the age of 65. She also travels extensively and writes poetry. Her first attempt in the Ladakh marathon is featured in an anthology, Runner’s Tribe.

Thirty-five-year-old Joycy Lyngdoh from Meghalaya is the first female truck driver with Amazon﻿’s trucking partner in India. A seasoned professional with over six years of driving experience, Joycy took to truck driving to earn a living. She began driving a school bus, and continued to work as a part-time driver at various other places across the city.

Joycy enrolled with Amazon’s trucking partner as a driver and got selected. She is now one of Amazon’s truck drivers for deliveries in and around Guwahati.

“I love being out on the road, travelling to different places, and meeting new people. This opportunity inspired me to pursue my passion for living a self-sufficient life. My advice to women who want to pursue driving as a profession is that if you believe in yourself, new opportunities will open for you,” she told HerStory in a recent interview.

Silva Storai is the only woman jockey in the world to win two Derbies. She also heads one of India’s premier equestrian schools, the Embassy International Riding School, in Bengaluru.

Italy-born Indian jockey Silva Storai started racing professionally in 1993. Besides designing and running a premier equestrian school since 1996, Silva has also been responsible for the conception of the Equestrian Premier League (EPL) in India over a decade ago, which has seen its clubs increase to over 20 in number since the pandemic.