History has finally been made in the United States. A woman has been nominated as a major party presidential candidate. While this was an expected outcome this year and certainly not a matter of contempt that a woman would aspire for an office seen traditionally as a man’s job, Hillary Clinton’s nomination was long overdue and its historic significance can never be fully articulated given that most advanced democracies have elected a woman to their highest office long before Clinton would ever get there.

For us who have grown up pretty accustomed to the Clinton name and presence in world politics, this is hardly a surprise and the fact that we have seen many offices previously dominated by men become gender neutral spaces quite rapidly throughout our growing up years can never make us empathize with the outburst of emotions this would end up causing in older women above forty who have overwhelmingly voted for her in this year’s primaries. For older women who have grown up struggling through the sixties, seventies, eighties, this means a lot. For decades now they have been excluded from these spaces and now they can finally see a woman get elected for a shot at the highest office in the nation.

But five decades ago in the 60s, this was far from the case and the idea of a woman getting elected as a president was not only viewed as a matter of joke but a funny distraction of sorts, like when you ask your child to perform for your guests as a dinner party and they all clap in a patronising manner at the end of it and move on to their dessert plate. In 1964, when Republican Margaret Chase Smith ran for nomination, she was asked all sorts of questions by a reporter in a town hall that were usually asked to her male counterparts-“how will you deal with the Soviet threat?”, “ Who will you pick as running mate?” etc to which the crowd, which comprised mostly her own supporters, laughed at her responses, not because they thought she was ridiculous but because the responses sounded so odd from the mouth of a woman that it all seemed like a freak accident of nature that this was happening in front of them and it left them all amused. When asked about the Russian threat she emphatically said that she’d shut Kruschev up. When asked who she’d endorse for President among the other nominees, she said she’d run to win the nomination and nothing less.

In a campaign stop in Dallas earlier that year when John F Kennedy was asked about Margaret Smith, he said,

“I would think if I were a Republican candidate, I would not look forward to campaigning against Margaret Chase Smith in New Hampshire, or as a possible candidate for President. I think she is very formidable, if that is the appropriate word to use about a very fine lady….She is a very formidable political figure.”

She was indeed! She had been elected to the Congress more than any other woman in the 20th century. In 1948 she was the only woman senator and she won three more terms to the senate before retiring in 1972. She was probably more qualified in her time than Barrack Obama was when he sought the nomination in 2008. She was probably as qualified if not less than Barry Goldwater, who eventually became the nominee. In Oregon, that year a group of enthusiastic women supporters collected and sold stamps to send her money for the campaign and urged her to run in the Oregon state primary that year, at the same time when men all over the country were laughing out loud on the prospect of a woman as a Commander-in-Chief. Now of course women hold many offices in the Congress and the cabinet. Hillary Clinton is widely expected to nominate Senator Elizabeth Warren from Massachusetts as her running mate making the first ever double bonanza of women candidates for President and Vice President, and she is also widely expected to cross that historical finish line and become the Commander of the armed forces of the United States, the leader of the free world so to speak. Nobody laughs at her like a freak of nature. In fact people are lining behind her from all corners with the #ReadyForHillary or #HillYes hashtags on twitter. Perhaps that is why when Hillary Clinton passed the magic number of delegates last week after California Primary, she released a campaign video that paid a fitting tribute to the struggles of women all over the world for voting rights, equal pay, Right To Choose etc. and it was no surprise that Margaret Chase Smith would feature in that video. 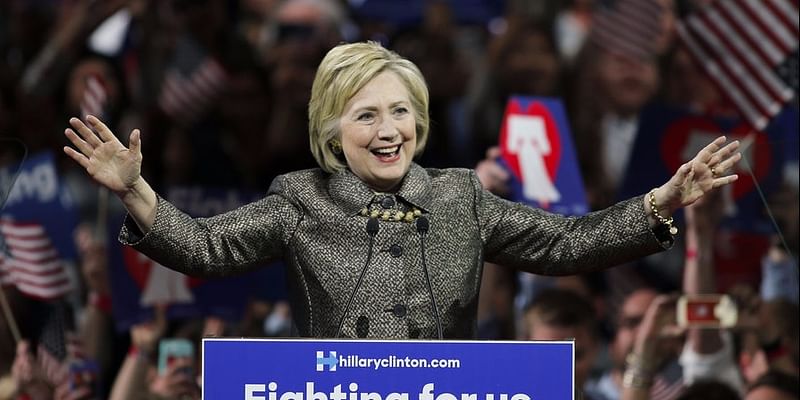