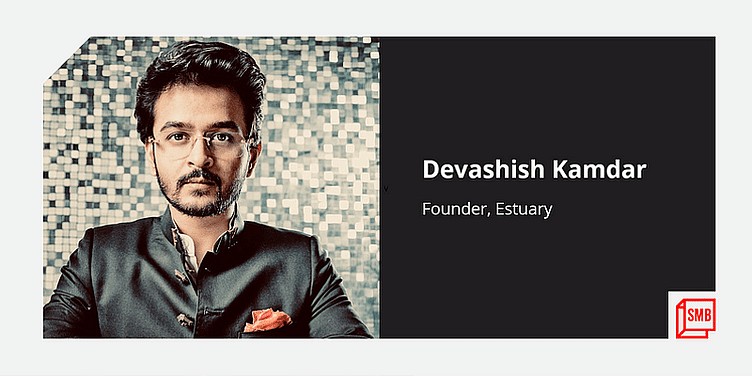 Did you know that water scientifically changes the real taste of whiskey? This gap was identified by third-generation entrepreneur Devashish Kamdar, who decided to found Estuary brand that manufactures and sells blending water for alcohol.

Devashish Kamdar’s career trajectory was set in stone when he joined his family’s Ahmedabad-based bridal jewellery business, Su Dev Group, started by his grandfather, after passing out from the University of Nottingham in 2014. His work led him to travel across the length and breadth of the country and across the world, especially Delhi, Mumbai, and London — where the stores are located.

It was being away from home for weeks that made Devashish take note of a gap. “I was used to consuming a particular brand of water with my whiskey and if that was not available, I wouldn’t consume it,” he tells SMBStory.

During the lockdown, this gap increased as restrictions meant he couldn’t find the right blend for his whiskey.

This led to the germination of Ahmedabad-based brand ﻿Estuary ﻿.

“When I saw the market scenario, there was no player operating in the space. People don’t realise but water influences the real taste of whiskey in a single malt,” he adds.

These claims are also scientifically backed. According to a report titled, ‘Dilution of whiskey,’ it is a proven fact that the taste of whiskey changes the moment water is added to it. “The simulations (of guaiacol-water-alcohol solutions of various ethanol or EtOH concentrations) revealed that EtOH and water mix non-ideally generating clusters of EtOH molecules,” the report read.

Devashish, Founder of Estuary, started working on the company in October 2020 by setting up a manufacturing unit in Jamnagar, Gujarat to make one of its kind blending water for alcohol. The fully automated unit has a capacity of producing 90 bottles per minute.

To manufacture it, the water undergoes seven layers of distillation including reverse osmosis, ozonisation, fortification, filtration, and UV ozonisation. “These processes tone down the water so that it can be blending directly with the whiskey,” he explains.

Estuary’s blending water is available in three different forms — for whiskey, vodka, and single-malt whiskey. They are available in 750ml and 330 ml packaging, with costs starting from Rs 375 and Rs 250 respectively.

The brand sells these products through 3,000 retail outlets, including Nature’s Basket and Living Liquidz, as well as through 30 distributors and five super stockists across India. It also sells internationally in London and Kuala Lumpur, and is soon planning to launch in Dubai.

According to a report by the Indian Council for Research on International Economic Relations (ICRIER), India is one of the fastest-growing alcoholic beverages markets globally with estimated market size of $52.5 billion (about Rs 3.9 lakh crore). The market is expected to grow at a CAGR of 6.8 percent by 2023.

While started amid COVID-19 restrictions, the company has been making its presence felt by participating in alcohol-tasting events, getting the sales team on the field, and engaging with consumers through online platforms – which helped Estuary garner some audience.

Earlier this month, it bagged the title of ‘Official Blending Water’ at The Scottish Whiskey Awards in the United Kingdom. It has also partnered with brands such as Glenfiddich, Macaallan, Aberlour and more to sell its products. “Whiskey and Estuary’s blending water are like shampoo and conditioner.” This is how they complement each other, he cites. Estuary does not have any direct competitors but indirectly competes with water and tonic water manufacturing brands (Shweppes, Canada Dry, Top Note).

While Devashish refused to share the revenue numbers, he added that since its inception, Estuary has so far sold 300,000 bottles. Further breaking down its revenue streams, Devashish adds that 40 percent of it comes from modern trade, 10 percent from distributors, and 50 percent from the hotels, restaurants and cafe (HoReCa) segment.

Going forward, Devashish is focused on expanding Estuary’s global footprint, starting with Dubai. He is also keen on partnering with more whiskey brands to further strengthen the brand’s presence in India.