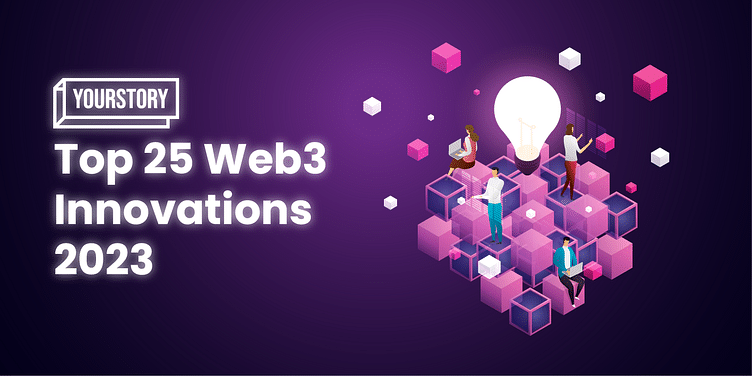 YourStory and The Decrypting Story are excited to announce edition 2 of the Top 25 Web 3 Innovations—a specially curated list of promising, early-stage projects in the blockchain segment led by Indian founders.

YourStory and The Decrypting Story are thrilled to announce the second edition of the Top 25 Web3 Innovations report—a list of promising, Indian founder-led, early stage startups in the blockchain sector.

The report, which comprises the list of startups and industry research on Web3, will showcase high potential, emerging innovators developing some of the most cutting-edge blockchain protocols, apps and products for the future.

"With blockchain and Web3 technology, India has an unmatched potential to transform domestic and international economies, startup ecosystems and job markets for the better," said Shradha Sharma, Founder and CEO, YourStory.

"With the second edition of The Top 25 Web3 Innovations report, we at YourStory are placing the spotlight once again on some of the most innovative, disruptive and impactful Web3 startups that can make this transformation happen."

Applications are now open for the list and report. You can apply by filling this form and stand a chance of being recognised as a Top 25 Web3 Innovations project/company.

What do the winners receive?

Edition 2 of the Top 25 Web3 Innovations will be unveiled in Mumbai in March 2023 at The Metaverse Summit—YourStory's flagship Web3 conference.

This year, the winners stand a chance to be profiled in the report, as well as on YourStory, in addition to shoutouts on social media and our newsletters.

Further, the winners will receive free access to YourStory University's upcoming cohort in April 2023, as well as free access to the next edition of our flagship tech conference—TechSparks 2023—in Bengaluru this year.

Commenting on the potential winners, Shradha added, "By chronicling their journeys, and providing them exclusive access to our startup communities, networks and learnings, we aim to empower them to build the future of the Internet economy at large."

The list of winners from the previous edition of the report included the likes of MooPay, Router Protocol, Arcana Network, Biconomy, Coinvise, Spheron, Questbook, OneRare, Liminal, Wall.app, Pillow, and others.

Each winner received a non-tradeable NFT (powered by Wize), commemorating and proving their status as a finalist of the Top 25 Web3 Innovations. Partners for the report included Buidlers Tribe, Woodstock Fund, Hashed Emergent, and Chiratae Ventures.

Partners for the latest edition of the Top 25 Web3 Innovations report will be unveiled soon.

The Metaverse Summit 2023 shifts base to Mumbai, to be held in March

Over the past 10 years, we at YourStory have been presenting the Tech30 — our specially curated list of India’s top 30 early-stage tech startups.

The 300+ Tech30 startups including the likes of Freshworks﻿, Niramai﻿, Pixxel﻿, Innovaccer﻿, Chargebee﻿, and among others have, cumulatively, raised growth capital of more than $2 billion, helped create over 31,000 jobs, are totally valued at $6.8 billion+, and have attracted investments from more than 400 investors.

With YourStory’s foray into the blockchain and Web3 space, the time has come to curate and build cohorts of innovative, disruptive Web3 startups that we are convinced have the potential to solve problems at scale and build a decentralised web.

Being at the forefront of reporting innovations and technological advancements in India, YourStory aims to help these startups achieve their dreams by giving them a platform to tell their stories, meet investors, collaborate with ecosystem experts and enterprises, raise funding, and take their startups to the next level.