JustDial story in Founder Mani's wordsV.S.S. Mani of JustDial was one of the keynote speakers at TechSparks 2011 Round Table Pune. Here are some key pointers from his speech

JustDial is a great India success story! We at YourStory.in hope Entrepreneurs like Mani inspire many such stories coming out of India in the next few years. 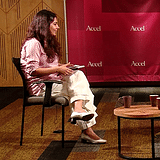 [Watch] Accel India Founders on the right way to invest: 'You need to have an open mind, but also a prepared mind'