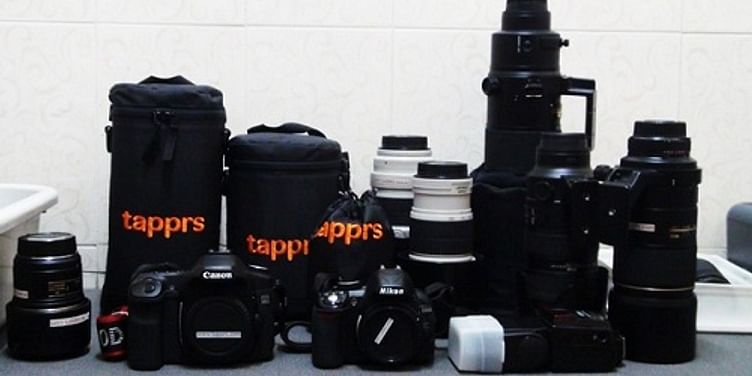 Founded by Prem Sagar, a photography enthusiast who was bogged down by a corporate job, Tapprs is an online photography gear rental service that quenches all your needs for photography equipment.

This Bangalore based photography gear rental service has an amazing range of DSLR bodies, lenses, etc. from all the popular brands. We caught up with Prem, founder and CEO at Tapprs, who believes to have had a fruitful career but the urge to move on got too strong. A man with ethics, Prem loves to do things the right way, whether be it maintaining invoices of the smallest thing to maintaining relations with his clients. In one such incident he recalls that on placing an order for a camera body on Yebhi.com, he received an extra lens which would cost more than 40K otherwise. Having found that it was a mistake, he immediately informed them and returned the lens.

Tapprs was incubated at The Morpheus, which Prem says was one of the best thing that had happened, and helped him understand the market and everything that was needed for his startup to scale and sustain. The other advantage was meeting some of the best people in the startup community who had helped him over time.

Tapprs have their own custom cases for keeping lenses and cameras which they claim to be better in terms of quality and protection compared to the original ones. They have served throughout the country and the business is purely based on trust. The customers have also been very careful with the product, and so far less than 1% damages have been reported which is incredible!

Watch the video to know more!