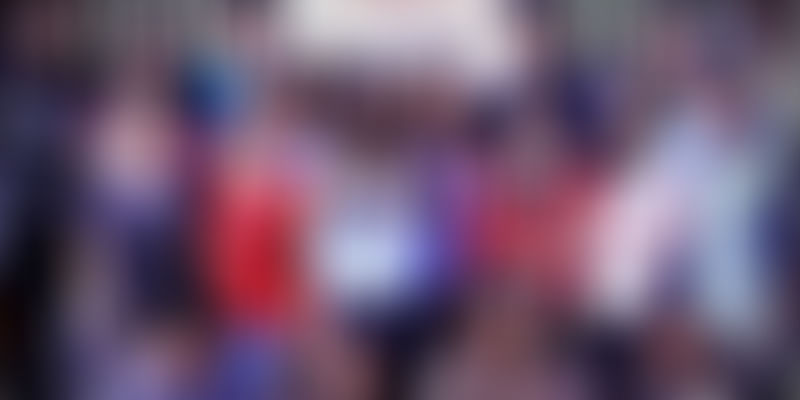 While most IIT grads are more than happy to get placed with an MNC or to get a well paid job in a phoren land, IIT Mumbai alumnus Aditya Gandhi came back after a brief stint in Germany to pursue his passion.

As Aditya gained work exposure in Europe, he saw industrial visits being used as platforms to provide exposure to students. Having been a part of the curriculum for the past many decades, industrial visits weren’t entirely unheard of back in India but they were not very educational. While the visits in Europe were aimed at helping students get a clear idea about the organization’s departments and real life functioning and were seen to lead to better hiring and, eventually, employee retention; back home they existed more in the form of formalities which ‘had to be complied with’.

Aditya had a B.Tech and an M.Tech degree from IIT Bombay under his belt when he moved to Europe and worked in the finance sector with Optiver Amsterdam as a derivatives and equities options trader.

“Being in Europe and understanding the student interaction and hiring practices of companies was the starting point for me and that’s how the idea of Purple Squirrel Eduventures Pvt. Ltd took form,” the 25-year-old explains.

Almost at the same time, Sahiba Dhandhania, a gold Medallist from Christ University, Bangalore, was also working in the finance sector. Working as a financial analyst with D E Shaw & Co, Hyderabad, she realized that she was extremely passionate about seeing students evolve.

Having been a part of AISEC through college, Sahiba had gained a fair amount of international exposure and interacted with students from over 40 countries. She had also, during the process, developed entrepreneurial and leadership skills which proved hugely beneficial for her later. While working with Dell through AISEC, Sahiba observed that the application in the real world varies to a large extent with campus curriculums. She was beginning to understand the need to develop a platform which could help strengthen the connect of campuses with recruiters. A footboard which could benefit students and help them shape their future by allowing them to make more sensible career choices.

Aditya explains, “During the course of our individual work lives, we noticed an undercurrent of frustration in professionals of all age groups and industries, around the professional choices they made. Only two out of 10 were actually doing what they believed in. And barely four out of 10 were strongly holding themselves back from jumping jobs. Some research on our part yielded unhealthy career choices as the major problem”.

This is how the idea of Purple Squirrel Eduventures, launched in September 2013, began to shape up.

Aditya and Sahiba shared their passion and their mission with YourStory. Here are some excerpts:

YS: What was the idea behind Purple Squirrel Eduventures?

A&S: The idea for starting Purple Squirrel Eduventures came to us when we were looking for a solution to nip this evil (frustration due to wrong career choices) in the bud. We decided that a potential work force that makes more informed choices by experiential learning and work culture immersion could and should be the future of our nation. That’s the thought that set us about trying to achieve this paradigm shift in bridging the gap between the industry and academia.

With 10,000+ experiences, 350+ partners and 10+ destinations behind us, we’re proud to say that it was the most fulfilling idea we’ve had till date.

YS: What is unique about the start-up?

A&S: When you look at campus placements or how people choose careers in India, it is influenced by what your predecessors have done so far, coupled with a herd mentality. PSQ wants to be a platform that bridges the gap between students and the industry which is what makes us truly unique.

(At this point Aditya quips in) My perspective on what an ideal IV should be, is to elucidate what prospective careers a student can choose from, relevant to their education. According to me, a venture like this enables students to understand and have complete knowledge of the application of what they are studying in the real world and get them at par with the current happenings of the industry. Through PSQ, I want to help create a platform where there are more holistic interactions between the students and the industry and also provide continuous engagement to build a more interactive environment as a whole. I want to ensure colleges enrich their students with experiential learning, work culture immersion and help students gain a better picture of a potential career path.

So, what type of industrial visits does PSQ conduct?

A&S: PSQ is all about giving the student exposure to every kind of option there is.

A typical industrial visit is a study tour that is crafted entirely based on the student’s curriculum. Relevant companies, startups, enterprises and speakers are contacted and an itinerary is set such that it spreads comfortably across the next few days.

At the visit, the students get to interact with corporate delegates who are on-the-job and actually see what they can expect in a work environment. An info-seminar organized for them with diligent speakers and a substantial Q and A session lets them further have their fill of exposure to said industry. This ensures that the student gets enough time to soak in all that he sees, as well as, leaves him rested for the next day. Post working hours in most organizations, academic, yet team-building activities are organized to keep students engaged.

From a Sky Lantern launch activity; something that cannot be done individually, to organizing a stand-up comedy slot or even a Photo Booth – Purple Squirrel Eduventures conducts IVs with a good blend of fun and learning. Miscellaneous engagement activities involve impromptu theatre performances that are scripted around college life, Scrabble or Pictionary tournaments, dance sessions or even DIY workshops.

YS: How will these industrial visits/tours help students understand what career to choose?

A&S: The industrial visit is very carefully designed to suit the curriculum a student is studying in his classroom environment. By making the industry his classroom, Purple Squirrel Eduventures essentially ensures that students make more informed decisions about the choices out there. They get to decide whether they like what they see, and hear about what it’s going to be like from the very people who work in that environment. Post which, they are in a better position to decide if they’d like to take up a job in an MNC, work for a social enterprise, join their family business or even start up by themselves.

YS: What are the different career options offered by PSQ?

A&S: We’re all about giving the student exposure to every kind of option there is. From unconventional careers like wine sommeliers, to taking a look at the backend of how an NGO functions, heritage walks across the offices of up-and- coming startups, to learning how a bottle of Coke is produced by going through its bottling plant – we have it all.

Media, engineering, bio-con, IT, cloud computing and entertainment production are just some of the industries covered by Purple Squirrel Eduventures. A student is free to make his decisions and then chalk himself a path most ideal.

YS: How has your experience been so far? And what are your future plans?

A&S: We started with a very lean team of 40 barely a year and a half ago, but we’ve already delivered 10,000+ experiences to students from every corner of the country.

We got a lot of support in the form of incubation from SINE at IIT Bombay and a round of seed investment from the good folks at India Quotient. The Series A round of funding is also very much on the cards.

Says Sahiba, “We plan to go up to 150 people within the next three months. The future of PSQ is B2C. We have planned direct interfacing with students and letting interested ones intelligently profile themselves via our app. In a few years, we want to open up the international markets to Indian students as well as introduce a potential foreign workforce to all that we have to offer in India. Borders, strata and faculty; we plan to unite them all.” A much larger office and significantly larger workforce are in the pipeline. Keeping our fingers crossed.

YS: How does PSQ make money?

A&S: The business model of PSQ is seamless with companies, students and colleges as stakeholders, but the buck stops at the students. PSQ works with universities and campuses right now with a B2B model of business.

There are about 20 billion students and about 35,500 colleges in India which makes institutes/colleges a good entry point for PSQ. But once the students have experienced the product via a IV, they also look at direct retention in the future so that career growth can be in their own hands.

Direct interfacing with interested users being able to intelligently profile themselves via a nifty app which will make its way into the market very soon will make the above even easier. Making the world of work culture immersion more accessible to even more volumes of students, cities and strata is what PSQ is working towards aggressively in 2015-2016.

Having come from a finance background, both Aditya and Sahiba are very detail oriented and adept with solution building. They both share the passion of promoting education to boost the economic growth of the country. Together, they are driven by the vision to ensure that all the students in the country get firsthand industry knowledge and can later directly take matters of career growth in their own hands.

To know more about Purple Squirrel Eduventures, check their website.