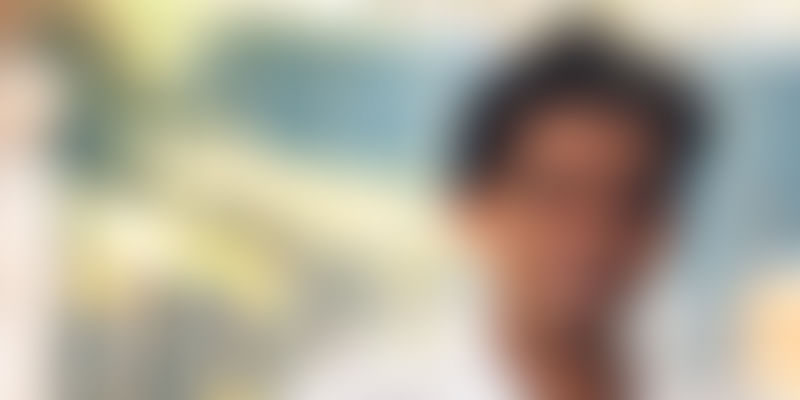 Born and brought up in a village near Shimoga, Madhu GB never wanted to get into the science stream. A big part of his childhood was spent on farms and that was where he learnt his lessons in perseverance. It was some time then that his father lost a lot of money in some projects but he never gave up. Little did his father know that his son was keenly observing every step he took, every move he made and was learning important lessons from them. Madhu was into art and used to sketch and paint.

He says, “If it wasn't for being a techie, I would've been a painter.” The life of most electronic and mechanical devices in the house never exceeded a month as he used to open the devices to see how they work and tinker with them. Though this became a regular affair, Madhu never realized his flair for technology. After completing high school, his uncles and peers forced him to take up science and he did buckle under pressure. But he had to pay his price as Madhu failed in chemistry in first PUC and was wondering whether he made the right decision. It was in the twelfth standard that he first saw a computer. Most of the time he used to play games. But, then he began creating notes in HTML for his classmates.

After his schooling, Madhu decided to go for animation but since it was costly he once again gave in to peer pressure and ended up joining BSc (electronics). Talking about his college, Madhu says, "I had no idea what was happening during the first semester. Things started to make sense only as time passed." One of the lecturers gave them a background on computers and that’s when his interest picked up. Madhu started going to his seniors to ask for help and they gave him problems to solve and questions to figure out. As he started taking interest in computers, maths and electronics got sidelined and his scores suffered again.

Throwing away the resume

However, during his final year, one of his seniors introduced him to Saikat Ghose, who was working at Valley Speak. Inc. Saikat spoke to Madhu for around six hours before deciding to hire him. While Madhu thought it was a normal conversation, it was only when Saikat asked Madhu to come and work for him the next day, did he realize that he was being interviewed all this time. Madhu went to Valley Speak office dressed in formals and carrying his resume. Saikat asked Madhu to throw away his resume and pull his shirt out. This was the beginning of startup life for Madhu. Madhu used to finish college at 2 pm and then would go and work at Valley Speak. After his exams, he joined full time while most of his peers were still figuring out what to do after graduation.

At Valley Speak, Madhu worked on a task management tool called Taskera. He designed the framework and the front-end of the tool. Madhu worked there for two years, while most of the time the product was in closed beta. Hesays, "I wanted to work on a product which would be used by people, so I quit Valley Speak." After quitting Valley Speak, Madhu moved to Bangalore in September 2012. He met Utkarsh and both of them started working on Lead Amplify - asocial commerce framework which connects buyers and sellers on social media sites. While they were working on Lead Amplify, they met Saket Jalan, who owned a music store and was one of their prospective clients for Lead Amplify.

One meeting led to another and both of them decided to start GuitarStreet which went on to become a leading e-commerce music store . Madhu single handedly built the entire framework called Flubber in PHP for GuitarStreet. For two years he built and enhanced it till there was nothing new to be done. So, Madhu moved on from GuitarStreet to start another platform Augment where they are bringing the capabilities of IFTTT inside email to organize emails in a better way. At present, Augment supports Evernote, Trello, Asana and Google calendar without leaving your inbox.

Madhu is just 25 with no big dreams but chasing opportunities to learn and improve himself. He wants to go back to his roots and help the farming sector with technology. He has one advice for students who want to make it big in technology - Ask questions, be curious and don't get stuck on GPA 9.0.