From Darkness to Light, Uttam Teron, an Unsung Hero 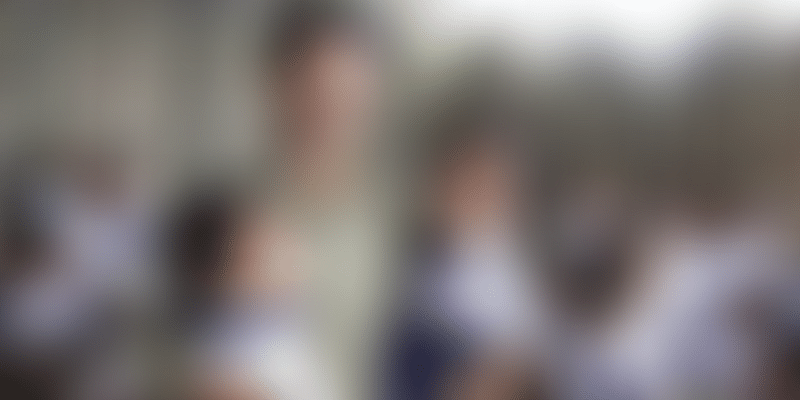 “I would spend the day with friends playing football. I had a care-free life. My friends and I would go to a nearby forest, cut firewood and sell them in the market; there was no guidance from home regarding education and we did not understand the value of education much those days. Moreover, I wasn’t a good student. However, my mother was strict and wanted me to study,” Uttam recalls.

But he had a calling. He loved to teach. He taught the village children whenever time permitted and noticed the children’s poor reading abilities. “They could not spell properly and some were even irregular in the government primary school. It was disheartening to see some even discontinue their studies.” Fate took a turn for Uttam thereafter. “It just struck my mind that I had to start a school for these underprivileged children free of cost at my home with limited children.”

But money was a huge factor and his parents were not pleased with his idea. “There was no money!” Uttam laments. But this did not in any way deter him and Uttam strode ahead. With a paltry amount of Rs 800 which he gathered from his tuitions, he started Parijat Academy in 2003 with four children in his old cowshed with just a tin roof and bamboo wall, a pair of desk and bench and one blackboard.’Parijat’ means ’heavenly flower’ in Assamese. “My parents would remind me time and again then that such work would bring no money and repeatedly say, ‘Think twice before going long-term; do not trouble us or yourself’. They’d also remind me that had I worked at a private company, I could bring home money and help my parents”. But things changed for the better and Uttam’s parents realised their son’s dreams, his passion. “They began to feel positive about my work gradually.”

It was a steep climb

All was, however, not hunky-dory. Frustration would easily seep in and thoughts of giving up would haunt Uttam. “Increase in number of children means need for extra classrooms, furniture, teachers’ honorarium and so many other things. But I would get a grip of my patience and keep telling myself, ‘I cannot spoil these children’s futures; they have come to learn at Parijat Academy’.” Uttam would collect old books, notebooks, used furniture, old clothes, shoes and socks, used school bags, whatever useful he could find for the school children. “They act as bait because children love these little things and therefore, are regular in school,” he says.

What started with just 4 children has today burgeoned to 540 students and 23 teachers at Parijat Academy. The school adheres to normal school timings and have classes from Nursery up to class 10 offering subjects like Assamese, Hindi, English, Mathematics, Science, Social Science and art work. Besides, programmes like computer learning, sewing lessons for girls, sports, dance and library are also offered. “We not only look after their education, but also ensure the children are nourished,” Uttam says while informing that milk is served to all Nursery students twice a week besides serving Mid Day meal for all the children. “We also give away food bags once a month for 25 children.”

But the challenge of raising funds always creeps in. “If lucky, we receive donation from individuals sometimes. We also accept old clothes, old bed-sheets, old notebooks- half-written, half-good for our school children.” Uttam started a programme called ‘Support a Child’ via which an amount of Rs 300 is given per child for education. “We save this money and give to our teachers as salary as there is no regular income of the school.” The monthly expenses of the academy and staff salary is roughly Rs 60,000. “Sometimes I can’t pay them their salaries,” Uttam reiterates that fund raising is still the main constraint.

And he continues to tread

Uttam’s exceptional work is being recognised far and wide. Visitors like NASA astronaut Michael Fincke, who is also a colonel of the US Air Force, and volunteers from afar often visit the school to see its functioning. “Sometimes volunteers help contribute on children’s education and also support in making classrooms, sewing machines, computer systems, desks and benches, etc.” In 2011, Uttam was also awarded the CNN IBN Real Heroes Award for his contribution to society.

Uttam has educated 11 villages and plans to introduce classes 11 and 12 at the Academy. “I have no particular free time and play with my hostel children. I’ve recently brought 23 children from a remote forest village and am keeping them at the hostel.”

He dreams of achieving a 100 per cent literate village and he has achieved 98 per cent of it. “I am happy Parjiat Academy is creating awareness on education. When children come for admissions to the school, our teachers help in filling up the admission forms as most parents are illiterate. The parents now value education. Nothing satisfies me more than eradicating illiteracy and giving an education opportunity to every underprivileged child; it also reduces child labour,” the hero notes.

NOTE: If you want to contribute towards Parijat Academy, you may do so by donating to the following mailing address: