A Basic Concept Design: Your trash is this designer’s treasure 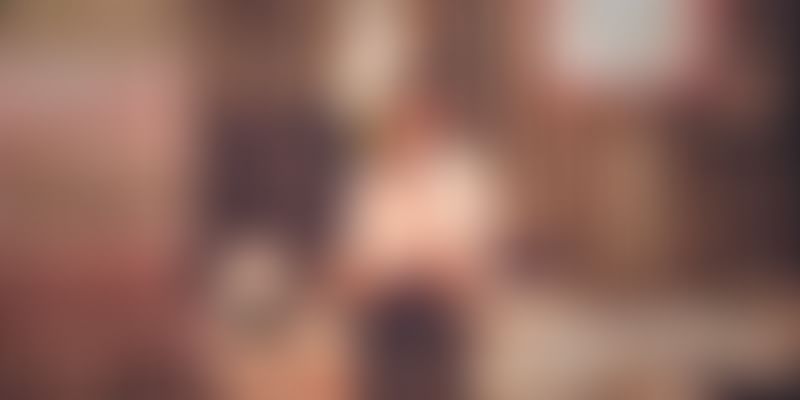 It was late 2007. Raahul Khadaliya was studying Accessory Design at NIFT, Bangalore. On one of his excursions to an old market near Avenue Road, he saw something in a small gully that was imprinted in his mind forever.

Sipping chai at a tea stall, he saw a baby rolled in a dirty cloth lying on the pavement. Curious, he looked around to figure out to whom the baby belonged. He saw a lady come out of the other side of the tea stall, wearing muddy clothes, face covered in dirt and hair loosely tied.

She had two small plastic glasses – one with a little milk and the other with some water. Quickly picking up the baby, and leaving the cups carefully on one side, she began to feed the baby by dipping her fingers first in the milk and then the water. In all, barely two drops in each feed.

In contrast, he stopped by for coffee at a restaurant on his way back to his campus in HSR Layout. Here again, he saw a mother and child at a table laden with snacks. A while later, they left, leaving wasting food that would easily have fed the lady and her kid for the next two days.

The duality of the two similar situations struck Raahul, and he knew that he needed to incorporate sustainable methods that avoided waste in his designs. While he had some ideas in place, he was unsure how to execute it. Coincidently, in the same year, he studied sustainability and sustainable development, and this led him to explore different ideas of sustainable development and design.

Finally, in 2011, while working with a design consultancy, Raahul decided to start on his own and founded ABCD (A Basic Concept Design). “Since then it has been a lot of ups and downs, but most have left me with the right frame of mind, every time pushing a little further towards the core goal of sustainable thinking and design for sustainability,” says 34-year-old Raahul.

He adds that the idea behind ABCD was survival, using various means. It has a different meaning and perspective for every individual - emotionally, socially, economically, and culturally. The original goal of the agency was to work in the area of sustainable intentions across products and services in any area possible.

Raahul adds that the market is still evolving to adopt ideas that are not economy-centric, but sustainable innovations centric. There are many ideas in the market that can be explored or redesigned to benefit sustainably.

“The idea is to build brands that are sustainable not only through CSR activities but from the core strategy of business, even if that means re-strategising the business policies,” adds Raahul.

Breathing in The Second Life

Raahul started ‘The Second Life’ as an initiative to build awareness of sustainability through products and services. “In a way, we are trying to create a case study of a small-scale business that can learn to be sustainable from the core with an ability to scale up and become a self-sufficient business model that is sustainable and transparent,” adds Raahul.

The materials are sourced from various waste vendors around Bengaluru. There are a few regular vendors who understand the need and get the team materials that fit the requirements, such as discarded film posters, white papers, and one-sided papers among others.

Scouting for treasures in waste

Raahul frequently visits vendors to see if they have anything interesting to be up cycled, such as document boxes. “These boxes were found at local waste vendors, which we have up cycled using our wrapping papers. The boxes initially came from Malaysia carrying corporate documents, which were discarded after a single use. We identify such waste and try to save them before recycling and put the story out with the product. Such cases are limited-range products and totally based on availability,” adds Raahul.

For inspiration, Raahul says that initially it was people and their interesting behaviour patterns when they found themselves in different situations. But now, he says he is inspired by just observing and learning of people, their behavior, and their connections with other people, situations and systems

“The human element, without any reference to gender, caste, religion, social barriers, economical status, greed, does exist, which is why the most systems work. But the constant influence of the so-called economic development policies are tempering the humane element,” adds Raahul.

On The Second Life, the team is planning the next set of products made from different materials than our current rage. Recently, the team has stared exploring wholesale orders looking at opportunities in the international market towards to the products.

For the current range of products, they are looking at scaling up to the next level to create more employment opportunities into a new area of crafts especially handmade and upcycled products. “We are in the process of raising funds from various possible sources,” says Raahul.

The team has made a revenue of close to Rs 1 crore till date.

With the growing focus on sustainability, there has been increased awareness on using recycled products. Some other organisations in a similar space creating green products are Arora Fibres, Green Power, Liquid Gold, Cleaning E-Wasteland among others.

Furthermore, there is also a focus by governments and states. According to a study by Recycle Trade India, more than 10 per cent of Gujarat’s plastic products are recycled and close to 4.4 billion pounds of plastic are recycled annually in the country. However, there is a belief that recycled products are yet to touch the mainstream market.

Apart from recycled products, there also is growing market space for upcycled products, like what A Basic Design Concept does. Global players like Hipcycle, TerraCycle and Playback Clothing are some popular names. In India, there also is the famous Haathi Chaap, or more famous as Elephant Poo products. However, these too are yet to touch mainstream market. Only time will tell how ABCD will fare.