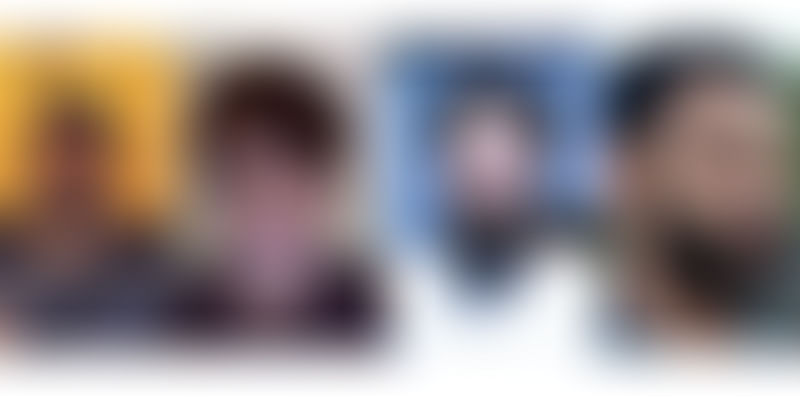 Humans are by definition social animals, and see greater gratification in doing some tasks in groups; be it watching movies or sports together, or going out for dinner. Music too is generally best enjoyed in groups. While it is possible to listen to music together on speakers in private establishments, users are compelled to use earphones in public places, which makes it difficult to enjoy music in a collaborative manner. Indian startup, Lisn aims to help users listen to music collaboratively with friends and family, without having to share earphones and irrespective of distance.

Lisn is a music streaming app that provides users with a collaborative music streaming and listening experience in real-time. Currently, the app has integrated Spotify and Soundcloud to let users pick a song, and when two users are online, listen to synced music together and build a playlist of recommendations in the process.

As part of their onboarding process, and to collect feedback, Lisn currently adds one of the founders as a default friend onto a user’s chat list when they sign up for the first time. The aim is to get real-time customer feedback and also test the product for scale.

The app’s home screen currently consists of three main tabs for chat, music library, and a tab that includes music that is currently being streamed. Similar to how Facebook Messenger works, Lisn’s app indicates which of a user’s friends are online through a circular lightning bolt. Abhinav Chhikara, co-founder of Lisn, said,

We've found that listening to a song together and chatting about it live is a great way to discover new music, it is like you're listening to music in the same room, and playing DJ for each other.

Lisn’s founding team consists of Vibhas Jain, Abheyraj Singh, Bhargav Sosale and Abhinav. The founders have prior experience in developing products and in the startup space, having previously worked at companies like Housing.com,Paytm and Airtel Wynk.

The startup is currently working remotely, with the team spread across Bengaluru and Delhi. Lisn initially started out as a side-project during a hackathon in October 2015. Over the course of 24 hours, they hacked together a build that ran on two phones at a time, could send music from Spotify and Soundcloud, and chat about it. Though it wasn’t perfect, it let users experience the core experience of listening to music together, even if they were in separate rooms, and discussing it over chat.

The team then set up a landing page and, based on feedback, realised there was great demand for such a product. So over the course of the next few months, the founding team co-ordinated remotely and went about fine tuning their app, improving the onboarding experience, user experience and other features.

After developing a stable MVP of their app and launching it in beta, the founders decided to quit their jobs and start working on it full time in early 2016. The team set up base at Delhi and Bengaluru, and found that the combination of a designer and developer in each city worked well for them. They did make regular trips every two months to sync up and break the monotony. Talking about the market opportunity they saw, Abhinav said,

Music recommendation on the mobile is broken. We need to send in a link through one of the multiple messaging apps, and then jump between apps to experience it. There's often no feedback loop on whether your friend liked the song or not.

Based on feedback, the team launched a new website in April 2016 and had about 100 beta users. For the next few weeks, they iterated and launched new features constantly till they reached a milestone of 100 songs streamed per week, and then slowly moved to 100 songs per day on peak days.

After many months in beta, Lisn finally launched their app for the public recently, and claims that about 12,000 songs have been streamed on their platform so far in August 2016. Their growth has been mainly organic through word of mouth, referrals, and also getting featured on Product Hunt and a few international publications.

Currently available only on iOS, Lisn is free to download and use for end users. Going forward, the team aims to keep it free for users, and monetise through B2B channels once they achieve sufficient traction.

Listn aims to explore an affiliate model with music streaming companies to generate revenue, and are also planning to integrate more streaming services like Apple Music into their app. In the coming months, Lisn also aims to release an Android version of their app, which they are currently working on. Two of their other most requested features that they are currently working on include group chats and introducing playlists on the search screen. Abhinav said,

Lisn is currently built to do one-to-one chats, and will require solving some UX challenges to scale to groups. That being said, group chats is definitely something we’d want to use ourselves, and are working on it.

Lisn sees their highly engaged users streaming music on the platform for one to two hours every day, with the US, India, Spain and Mexico being their top four markets right now. The team declined to share their installs and monthly active users at this stage. Lisn is currently bootstrapped and the founders aim to raise a seed round to boost growth and adoption.

Like other sectors, the next step for streaming services is to introduce more layers on top of existing interfaces. Flipkart tried to popularise collaborative shopping through its platform Ping, before shutting it down. So, providing collaborative, real-time experiences in other industries like music streaming is an interesting problem to tackle.

Turntable.fm, launched in early 2011, was one of the pioneers in the interactive music streaming space for desktops. On the platform, designated users chose to play songs to everyone in a ‘digital chat room’, where users could interact with each other over text. The company went on to raise a $7 million funding round from multiple investors. Though it was gaining users at a steady pace and monetising through a premium ad-free subscription service, the company decided to shut down and pivot to a live service, which allowed musicians to perform interactive online concerts. This too didn’t work out and the company was shut down in 2014. Times have changed now, and Lisn is a mobile-first service, and competes with players like Jukebox and Parallel.

Lisn’s sign up process is quite straightforward, and after linking a Soundcloud or Spotify account with Facebook, users can start listening to music with friends and also chat with them through the app. The app does live up to its promise and provides an interesting way to discover and explore music.

For an app that relies on collaboration, it will be crucial for Lisn to get groups of friends on the app instead of individual users, to ensure stickiness and have network effects kick in. While the app is positioned as a global product, Lisn may need to look at each of its key markets differently and cater to local tastes. For example, introducing integrations with Gaana and Saavn, which are more popular than Spotify, could help capture the local market faster. The team confirmed that they are exploring these integrations.