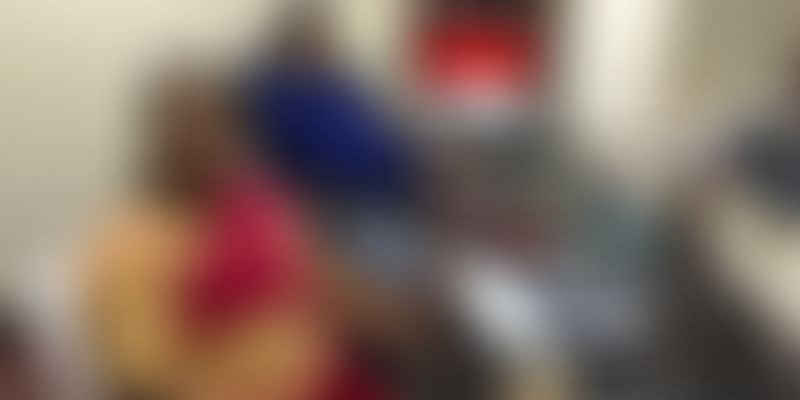 It is not often that you have two friends, who have lost touch with each other for twenty years, creating something that is unique to the world of bio-technology. These two 38-year-old individuals, Dr Fathima Benazir and Alex D Paul, were discouraged by many to set up a startup and were asked to continue with the daily grind. But their stubborn nature led them to set up a life sciences company – Azooka Life Sciences - which is backed by the Indian Institute of Science (IISc), in Bengaluru.

Azooka Life Sciences is the only Indian company that has created a plant-based dye for medical and life sciences (non-human) research. Most of the stains or dyes in the market are synthetic, which can be carcinogenic on repeated exposure in lab conditions. Dyes are used – in labs - to enhance the microscopic image of tissues to isolate the DNA or any form of protein in crop research, food safety and medical diagnosis to understand the incidence of disease. However every opportunity starts with the doubting of the self.

Dr Fathima Benazir was constantly fighting her own mind over fulfilling her responsibilities of living in a conservative society. She was a mother of two and a dutiful wife. Yet, her work as a respected scientist was not recognised back home. Her business partner, Alex D Paul, was a successful sales and marketing executive who was battling similar problems. In his case people respected him as long as he closed big corporate deals. He was asked not to risk being part of the startup world and play it safe at a job. He too was a dutiful husband and a father of two kids. Rather than being rebellious these two experienced individuals went against conventional wisdom with their acumen to succeed.

The market for stains alone is close to $1 billion (Rs 6,700 crore) in India. According to the Indian Brand Equity Foundation, the organic chemical market is estimated to be $6 billion in size, as per their study titled “Chemicals”. However, it was not the market that made Dr Fathima Benazir and Alex D Paul set up the business. They were driven by a passion to learn and find solutions to a problem.

“I never intended to commercialise my work until Alex told me that research applications from India were so good that they had the potential to go global. But he also told me that Indian scientists were holding back because of their lack of business sense,” says Fathima, co-founder of Azooka Life Sciences. Fathima sits in her small office in a post-Victorian era, 80-year-old building at the IISc campus overlooking a garden, and jokes about how, when she met Alex again, she told him only one thing, “I told him we would commercialise it. But I did not know anything about business, and he had to take care of that part while letting me innovate.”

It is 1993, and two childhood buddies, Alex D Paul and Fathima Benazir, children of parents who are employed in the Tamil Nadu Government, are about to complete their tenth standard from Breeks Memorial School in Ooty. Leaving Ooty was all that these two could think of. For the first time in their lives, they could explore the world beyond the mountains. Alex went on to study BSc in Computer Science and pursue an MCA degree at Trichy, and Benazir went on to finish her BSc in Biotechnology and became a doctor (PhD) in environment biotechnology in Coimbatore.

They only met once over the course of the next twenty years. Alex became a global sales and marketing expert at the $1 billion Zoho Corp, and Fathima became one of the most recognised researchers and lecturers of plant biology in Coimbatore. She authored over 35 publications and specialised in studying natural dyes for the staining of biological tissue.

Fathima was so engrossed in her research work that when she applied for Post-Doctoral Research at the Indian Institute of Science in Bengaluru, she gained immediate acceptance in 2011. She began her tutelage under Professor M R N Murthy, and began to study protein structures. Little did Benazir realise that she had actually created a dye or stain through organic plant material (which is pending a patent grant). This was in 2014. However, Azooka Life Sciences did not have quite the typical commercial beginning.

The foundation of Azooka

As luck would have it, Alex, who was visiting Ooty, in 2012, on a personal visit, met Fathima’s mother, who was concerned that her daughter would only study and not take a break. He immediately called Fathima, and the two of them had twenty years of catching up to do. “I realised that she was brimming with ideas and I decided to just connect her to friends I knew in the field of research.” Alex had no intentions of being part of a startup at the time. “I had a global corporate role and I was happy doing what I was at the time,” says Alex. However, he did read up on Fathima’s work to figure out what those organic dyes were being used for.

But everything changed in late 2014 when Alex was visiting Australia. “I had plans to settle down abroad, and then I began to think if I was adding any value other than bringing my vast knowledge of sales in networking technology to another country. It would have bored me to death,” says Alex.

By then, he had also realised that there was a huge market for Fathima’s product to go global. Upon contacting her, he realised that she as a scientist had not even unlocked her true potential for commercialising research. “This was my moment, I could use my experience to commercialise a new venture, and life sciences being the future, I decided to take a bet on Dr. Bena’s product. If this was in some western markets, the scientists would have gone big on commercialising the product,” says Alex.

He stalled his plans of leaving the country and quickly coaxed Fathima into setting up a company. The timing was perfect because Fathima had just finished her Post-Doctoral fellowship by July 2014. She continued working in the Department of Bio-Chemistry, IISc for another year, meanwhile Alex continued his research in taking the company commercial. Azooka Life Sciences was born in July 2015. However, the challenges in setting up a company in a research centre had just begun. There were many naysayers.

“The challenge was to convince senior scientists at IISc that we could make it work as a business. Also, the fact that Alex was from outside the world of research made the scientists look at him as an odd ball,” says Fathima. Alex prepared presentations and began to talk about the benefits of using organic dyes versus the synthetic dyes of large corporations. He went all the way to bring industry experts to validate the product and to convince folks at IISc that commercialisation of research was the right thing to do.

His pitch on synthetic dyes was simple.

“Ethidium Bromide, used in most synthetic dyes, is treated as hazardous waste by many organisations,” says Hari Kumar, founder of J H Bio-Sciences, a Rs 50 crore life sciences product distribution company in Bengaluru. Hari also points out that there is no solid research proving the negative impact of the improper disposal of these stains on people. It is generally accepted that their disposal must receive the utmost care- the stains have to be incinerated so as to avoid an impact on people and the surroundings. He adds that Azooka Life Sciences and their organic dye was the only organic stain available in India.

This was what convinced the senior scientists that these two 38-year-olds were on to something. Alex put in close to Rs 50 lakh to begin manufacturing the product by mid-2014. “For startup enthusiasts, one must understand that a life sciences company takes at least seven years to make money if it has a great product,” says Naganand Dorswamy, CEO of IdeaSpring Capital. He says that working with R&D centres and institutions on long term contracts would make such companies valuable.

To Azooka’s luck, leading scientists M R N Murthy, H S Savithri and C V Natraj became its advisors. IISc granted the company a few lakhs to test and validate its product. Alex aptly named the product “Tinto-Rang” (colour in Portuguese and Hindi) as the first of its kind nuclei acid stain. From the beginning of March 2016, Alex began to build the business case for the product. The initial pilot of the product was picked up by research centres like IISc, CFTRI , DRDO, Tamil Nadu Paper Limited and Biodecipher.

The business case made in India

Alex is making over 150 phone calls a day, speaking with distributors and corporate research centres. Some of them give him appointments and he is quickly jotting the names down in his diary. It is like the movie ’The Pursuit of Happyness’, where the protagonist Chris Gardner is studying to become a stock broker and needs the money to take care of his son. Alex wastes no time in getting into his old Hyundai-Santro and rushing to meet scientists and distributors. He comes out convincing them of the viability of the product and most of the scientists ask him whether he is a PhD in biotechnology. “I am no scientist, but I have figured out the business application of Fathima’s invention. So most of them give me a listen,” says Alex.

Each vial of the product “Tinto Rang” has a 25 percent premium over synthetic products offered by the likes of ThermoFisher, which is a multi-billion dollar company.

“India is dominated by foreign products, and it is refreshing to see an Indian scientist give us an organic product that is as efficient as synthetic international products,” says S Vishwanthan, founder of Sai Genomics, the Rs 50 crore life sciences product distribution company. He says that the market for this product is enormous as each research institution could be performing over 30,000 DNA extractions per year. “Azooka’s product will have to be sold with channel partners who have access to all these R&D centres,” says S Vishawanthan.

Today, Azooka has tied up with five distributors. The distribution system today charges high margins to distribute the product. “We are clear that once the product gains critical mass by reaching several institutions, we can reduce those percentages with distributors,” says Alex. Today, a distributor can charge 25 percent on the price of the product.

A stain is sold to clients in a 0.50 ml vial. The current capacity of Azooka is to manufacture 5 litres a month. They are planning to create a lab or work with a third party factory to increase their capacity to 50 litres a month. There are 140 pharmaceutical companies in India with an average turnover of Rs 100 crore or more. Then there are the top 20 biotechnology companies that have their research centres in India. The competition for Azooka is all the synthetic dye manufacturers in the world. The largest one is a product offered by ThermoFisher.

But for a little Indian company, the challenge is the system by itself. The large companies have the money to take care of the distributors and influence scientists to use hazardous material. But Alex and Fathima have faced far worse and they are fighting against all odds to build a company that is original. They have taken their second leap, which is to convince the scientists that the product is unique. Now, they have the research centres to win over. They have a product and a stellar scientific board of advisors. It is only a matter of time before they raise money and become a large life sciences company.