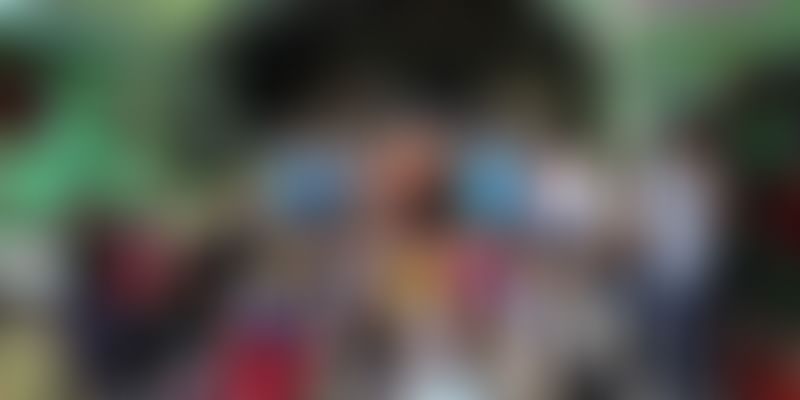 With networking plays a huge role in clinching deals, getting investments, finding mentors and making contacts, it is not uncommon for entrepreneurs to meet and talk to one another at conferences, events and meetups. But 28-year-old Anuj Agarwal, an engineer from Jaipur, felt the monotony and the formality of these events didn’t really serve a purpose.

He believed that the connections that were made at such meetups didn’t last and the conversation was lost. He began discussing with his friends – Jahnvi Sharma, who is an independent traveller, Rachna Ghiya, who runs video making company Crisptalks, and Swapnil Soni, who was working with Anuj at his digital marketing company. They had the idea of bringing all the entrepreneurs and startups together on an informal platform.

“What if the formality was removed from such events? All four of us like to travel and that is how we thought of adding the element of travel to the venture,” says Anuj. The friends came up with enTRIPreneur, a platform that builds curated trips for entrepreneurs and wantreprenuers.

Working as a travel networking initiative enTRIPreneur aims to change the way entrepreneurs connect with each other. The platform organises exclusive trips for entrepreneurs where they can relax, interact, connect and learn with other like-minded and proactive entrepreneurs. Anuj says,

We believe that networking is much more than exchanging visiting cards. It is not just about knowing each other's names or businesses, rather it is all about knowing a person both professionally and personally in order to create a connect that is firmly laid on the strong base of friendship.”

The idea, he says, is to give entrepreneurs the needed space with like-minded people, for them to ideate, discuss, interact and work together.

Crafting each trip for each set of entrepreneurs

The platform creates real-life connections for entrepreneurs, who can then explore options to work together on the basis of synergies they have found with other entrepreneurs on the trip.

Anuj says the trips are carefully crafted to provide an exciting experience packed with sessions to get entrepreneurs their creativity on. They choose locations that are offbeat and located away from the hustle-bustle of the city. Anu:j says

The idea is to provide a raw and outlandish experience. All our trips are aimed to bring together great minds with ideas and ambitions to live, network, help each other and more importantly, have loads of fun that is much needed in their busy lives.

Each entrepreneur is handpicked after a lot of thought from the applications received, so that everyone could complement each other and have unique experiences to share. The itinerary for each trip is curated in collaboration with different adventure activity experts and seasoned travellers. The trip is then announced, and open for applications for. Entrepreneurs who wish to travel fill out a form, expanding on their profile and their business'.

On the basis of the form and their social media profiles, the team shortlists profiles and then have a one-on-one conversations to figure if they are a perfect fit for the trip. This simply means that they should be able to benefit from the trip as well as contribute in terms of their knowledge and experience.

The team has planned two more trips. In October they plan to take entrepreneurs to Rajasthan and are in the process of finalising the itinerary.

The second one is planned to South India in the month of December. “This Southern expedition will add another feather in our hat as from this trip we will bring on board international entrepreneurs to travel with us,” says Anuj.

Curated travel as a concept is fast picking up in India. Byond Travel, started by Vikram Ahuja, has been curating and building different kinds of travel experiences for people – from yoga retreats to jungle safaris.

There also is Jagriti Yatra, which works closely with social entrepreneurs and takes them to different parts of India. Then there is TripFactory, backed by Mohandas Pai, which builds and creates trips for people.

Anuj says that unlike Jagriti Yatra, their trips are only for the entrepreneurs and they try their best to take only those entrepreneurs who have vast experience of their sector. The team makes money on the basis of the trip charges that the entrepreneur pays them. They intend to on-board sponsors soon, so as to reduce the cost of the trips.

Currently bootstrapped, the team isn’t looking to raise funding at the moment. They intend to bring on board international entrepreneurs as well as plans trips overseas. Other than that they also plan to start workaway camps, which will be week-long trips to secluded locations, with the provision of Wi-Fi to do work.

Anuj adds that they also plan to diversify by curating trips especially for particular sub segments of entrepreneurs such as those in the creative fields or simply those who are just starting their ventures. Anuj says:

“The way we see it, in the coming 5 years, there will be a community of at least 5,000 entrepreneurs strongly connected and partnered with each other to form new startups. We will be also building a common platform for entrepreneurs joining us for different trips so that they can connect to each other.”