[App Fridays] Will GIFs be the 'go-to language' for millennials? Bobble Keyboard believes so 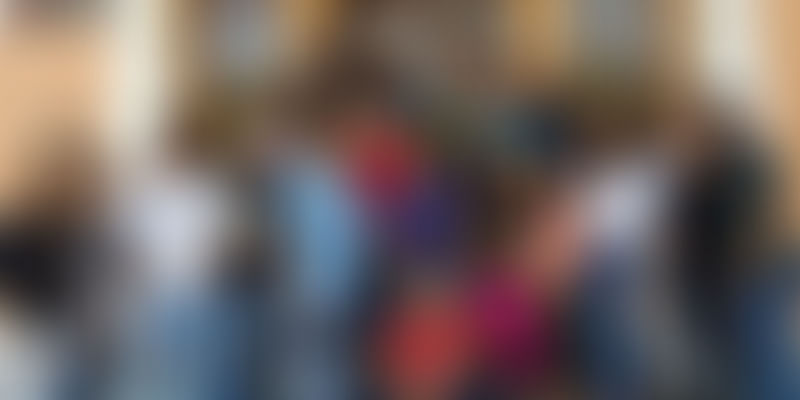 While English is the most popular language spoken globally, millennials are today adopting a new kind of language, one most senior folks don’t easily comprehend — Emoji. The smartphone revolution has given us instant messaging services like WhatsApp and Hike, and regular texting now seems to have become passé, thanks to inbuilt emojis. The next growth curve in messaging seems to be in keyboard apps that can create custom emojis and GIFs. Let us explore the world of dynamic GIFs in this week’s App Fridays – Bobble Keyboard.

Bobble was founded in 2015 by Mohd. Wassem and Ankit Prasad. Wassem, a graduate in Economics from Delhi University, has about 10 years of corporate and consulting experience. He had begun his professional career as an officer with NTPC. Ankit, on the other hand, studied Mathematics and Computing at IIT Delhi, but dropped out in his final year to start Bobble.

Bobble currently consists of a 30-member team, with about 10 focusing on content and the remaining 20 on technology. Ankit is responsible for product and engineering, while Wassem serves as the Managing Director of the company.

Speaking with YourStory, Wassem noted that Bobble initially started out as a standalone app for stickers, and even went on to raise funding from SAIF partners. But after seeing the app economy as insiders, the founders realised that, if they wanted to achieve viral growth, they would need to be more ubiquitous to users, and thus decided to relaunch Bobble as Bobble Keyboard in March 2016. With customised stickers and GIFs, Wassem said that the startup’s goal is to make mobile conversations more expressive and personal.

Over the course of a year, Bobble Keyboard has seen great adoption, and the team estimates that they have had over eight million installs so far, with a user base of millennials that are younger than even Snapchat’s. Wassem noted,

Ninety percent of our users are 25 or younger. With a rating of 4.6, we are the highest ranking Android app in India at our scale.

Wassem stated that about 70 percent of their users were acquired through organic means, and that they have also partnered with OEMs like Foxconn, Indus OS, and tech giants like Apple and Baidu for various integrations.

Wassem said that for their brand InFocus, Foxconn promoted the Bobble app as the USP of their phones on FB. Talking about Baidu and Apple, Wassem said, “Facemoji is a product from Baidu, and it rolled out Bobble’s functionalities by integrating our SDK for the US market. Apple contacted us for integration into iMessage less than a week before the launch of iOS10.”

Bobble is currently free to download and use. Having achieved an ideal user base, the startup is exploring different means to monetise on both the B2B and B2C fronts. Wassem noted that many of their users have expressed interest in a premium version, where the Bobble app’s logo and link could be omitted from the GIFs. On the B2B front, they aim to provide brands with customised GIFs.

On signing up on Bobble for the first time, users are requested to take a selfie of themselves. Bobbles’ face recognition technology converts the selfie into a cartoon bobble head. The app then creates three caricatures from the selfie, and users can pick the one they like best. Bobble also includes caricatures of celebrities in their app, and Wassem noted that caricatures don’t come under copyright clauses, meaning that one doesn’t need explicit permission to use them.

Users need to add Bobble as their default keyboard for better accessibility, but they can also open up the app separately and use it if they wish. The app includes thousands of stickers, emojis, and GIFs.

Some of the interesting features include:

-Bobble Keyboard claims to use Artificial Intelligence to automatically predict emojis, stickers and GIFs while a person types.

-Dynamic GIFs: Users can type their message on Bobble and the app shows relevant stickers and GIF right over the chat app screen.

-Glide Typing and Voice Typing: Users can type faster by sliding their finger from letter to letter, just like it happens in Gboard. Easily dictate text on the go.

-Emoji Search and Store: Users can use the search bar to find emojis they like faster, and can also download specific emojis based on different themes like Netagiri, Angry Indian Dad and so on.

-Local language support: Bobble keyboard is available in about 21 Indian languages, including ‘Hinglish’.

For the purpose of this review, I compared the functionality and ease of use of Bobble against Swiftkey and Google’s Gboard.

Bobble does a great job at its USP – creating dynamic GIFs for different conversations and also providing a large variety of GIFs on their Sticker Store. At this stage, all GIFs go with the Bobble branding and link (which can be deleted before sending). Personally, I felt adding a premium option to remove Bobble branding would help create more suspense and interest in the app.

Bobble’s word correction feature, though, is not as advanced as Swiftkey and Gboard at this stage. Having becoming accustomed to them, I found typing regular messages to colleagues and professional contacts a little cumbersome.

But on the whole, Bobble lives up to expectations, and has enough content in the form of stickers, GIFs, and stories to keep users engaged for long durations. According to Bobble’s Google Play Store description, one feature currently in the pipeline is camera filters, which will let users click pictures from within their keyboard. Some other interesting keyboard apps from India include Emojifi and Qugo, while on the global front, Bitmoji also lets you create personalised GIFs.