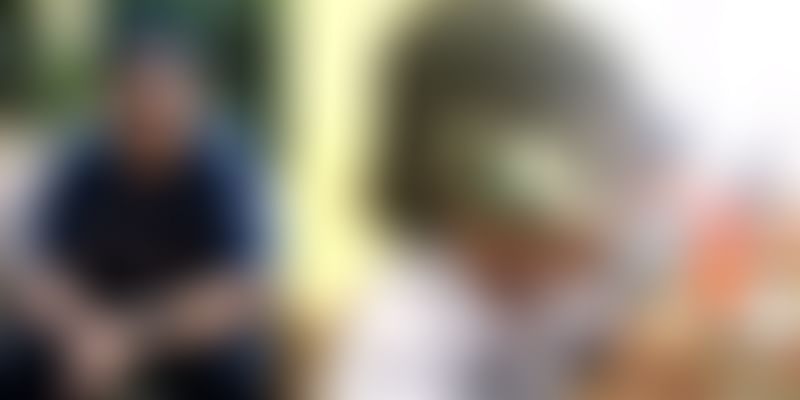 Gursimran Singh, a 16-year-old class 12 student from Gurugram, has introduced the concept of ‘imagine or visualise’ in the lives of the sightless.

Sight. A one-syllable word, but a sense that perceives 80 percent of all impressions.

We interpret the world, its beauty, its dangers, with our eyes. Close them and we are in a world of endless darkness.

It is true that the blind do not miss what they never had. This doesn't mean we accept their state or our inability to help them. After all, nothing can exceed the joy and sense of fulfilment one experiences by giving someone something they never had.

Sixteen-year-old Gursimran Singh is the inventor of EyeScribe, an assistive device that helps the visually impaired experience the joy of reading. For Gursimran, the concept of EyeScribe evolved over a period of time—“I had a relative who was visually impaired. Seeing him struggle every day led me to an open-ended question: “If we can, why can't they?” and “if we can, then what should we?” he says. Gursimran started to work on his device in August 2016 and it took him almost three months to showcase it. It was first screened at the Atal Tinkering Lab Innovation Challenge by NITI Ayog in the FICCI Auditorium on November 5, 2016.

EyeScribe is a type of wearable technology. It has an eight-megapixel camera fixed to the frame that enables the capturing of an image. Once the image is captured, it is processed to produce an audio output. “The process basically includes an optical character recognition followed by a machine learning algorithm for correction and accuracy which is finally worked upon by a text to speech engine,” Gursimran explains.

There's an abundance of braille devices in the market today. However, EyeScribe stands out as it nullifies the use of braille in itself.

Taking advantage of the fact that the blind have an enhanced sense of hearing, Gursimran has given them an easier alternative. “EyeScribe dictates the text, which means the text need not be in braille; it can be in any language. Also, currently, the resources available to the visually impaired are fewer than what others have, and the books printed in braille are voluminous. EyeScribe is a virtual solution and can be used across any text matter, regardless of it being in braille or not.”

He uses an example to explain the above, “Most of the newspapers, which are printed in braille, are published every fortnight. But with EyeScribe, a blind person can stay updated every day because he/she can now read the daily newspaper.” he says.

Another hurdle sprung up when he visited blind schools to test his innovation. “The authorities were skeptical of the medical reliability of the device and so they did not allow me to visit. I then had to work with doctors and psychologists to validate that my device was fit to use.”

Success through it all

Initial funding to develop the first prototype of EyeScribe came from Gursimran’s parents and which it won the ATL grant-in-aid of Rs 20 lakh. Also, NITI Aayog provided a makerspace to develop the device at a commercial level for distribution across the country.

It was declared the National Winner of the 2017 Pramerica Spirit of Community Awards, opening up a host of opportunities for the young talent. Gursimran considers his stay at Washington DC for the International PSCA honour as the most valuable week of his life. “I got to collaborate with people from eight different nations. It was an honour being felicitated by Michael Phelps, the most decorated Olympian, for my community service. It also brought my innovation to a national front. My dream of reaching every single blind person can now be fulfilled.” A monetary reward of Rs. 50,000 from the same helped expand his work.

Till date, Gursimran has successfully tested his device on 120 blind children between the ages of five to 10 years with a 98 percent success rate. “I am gradually expanding the base, and with each test, I know what needs to be improved and how it is to be done.”

Heading toward the future with a sense of purpose and gratitude

Speaking of lessons learned in this journey, Gursimran says, “It was a great learning experience—it taught me how to manage things, how to network with people, and how to face challenges. The people I have worked with primarily are the visually impaired themselves; they are the biggest source of inspiration for me.”

Now recognised on the national front, Gursimran is working toward a completely market-ready device. He then wishes to take EyeScribe through the ADIP Scheme (Assistance to Disabled Person for Purchase/Fitting of Aids and Appliances) functioned by the Department of Empowerment of Persons with Disabilities under the Ministry of Social Justice and Empowerment.

Gursimran feels confident about working in the field of assistive technology and biomedical engineering.

He says, “I have already started working on my next device. With the same vision, I have started a non-profit called The Code Initiative, a social campaign to "heal with technology." It aims at providing such services to those in need and spreading tech-awareness.”

EyeScribe was the first device under The Code Initiative and in ten years he wants to expand pan-India, reaching every person who needs it.

A man on a mission, Gursimran ends with an original quote for his readers, “Be curious, be humble, and always try to make your life memorable for others as well as yourself.”